Ha Long Bay — The context of the movie “Kong: Skull Island” from above.

The last location for the “Kong: Skull Island” film crew in Vietnam was Ha Long Bay in northern Quang Ninh province, which is a UNESCO world heritage site on two occasions.

UNESCO designated Ha Long Bay as a Natural World Heritage Site in 1994, saying that “there are no comparable locations on the World Heritage List.” The bay was designated as one of the New 7 Wonders of Nature in 2012.

The bay is one of Vietnam’s most popular tourist attractions, with 1,600 islands and islets forming a magnificent seascape of limestone pillars. Ha Long Bay is a famous tourist attraction in Vietnam, as well as a UNESCO World Heritage Site with aesthetic, geological, and geomorphic significance.

The crew visited Halong approximately a half-year ago and spent several days surveying the bay. Jordan Vogt – Roberts, the director, will inspect the locations one more time before the filming begins the next day on March 16th.

Ti Top Island, located in the middle of the bay, is one of the most popular destinations for both foreign and domestic visitors to Ha Long. Ti Top is well-known for its green seas and white sand beaches. Ti Top Island is located 14 kilometers east of Bai Chay Island.

Ti Top Island, located amongst many other tiny islands, provides a wonderfully alive islands that is an attractive destination for tourist boats.

Ba Hang Village is a tiny floating community near Thien Cung Grotto (Heaven Grotto). The town is a popular location for tourists who wish to see native life amid the magnificent bay.

Visitors not only get to see fishing towns, but they can also kayak through the bay’s caverns.

Thousands of islands of all shapes and sizes dot the water, adding to the magnificent splendor of Ha Long Bay.

A unique and distinct perspective of Halong Bay from Bai Tho Mountain.

Halong Bay, along with Nha Trang Bay, is one of Vietnam’s two most beautiful bays and is frequently visited by foreign cruise ships.

PLACES TO TAKE THE MOST BEAUTIFUL PICTURES IN HA LONG BAY 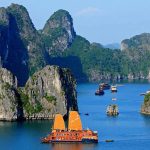 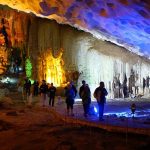 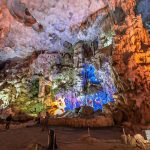 Main amenities: There are 147 non-smoking bedrooms. Daily housekeeping is provided in two restaurants and two bars/lounges. Indoor swimming pool Terrace on the roof The…

Main amenities: 205 non-smoking guestrooms. On the beach, housekeeping is performed on a daily basis. There is a restaurant as well as a bar/lounge. Pool…

Main amenities: 168 guestrooms. On the beach, housekeeping is performed on a daily basis. The casino A restaurant as well as a bar/lounge. Both an…

In this Yen Tu – Ha Long 2D1N discovery tour, visitors will be immersed in the quiet, fresh space of the mountains and forests, and…