From the moment you enter the city, the mystique of an secluded ancient town isolated from the modern world will take your feeling back to old countryside society of Vietnam. Join with Focus Asia Travel, you will explore beauty of Hoi An Ancient Town.

Lying on the banks of the Thu Bon River, Quảng Nam province ( in the South Central Coast of Vietnam), Hoi An Ancient Town is an exceptionally well-preserved example of a South-East Asian trading port dating from the 15th to the 19th century.
Over the last few years, Hoi An has become a very popular tourist destination in Vietnam. Its buildings and its street plan reflect the influences, both indigenous and foreign, that have combined to produce this unique heritage site. In 1999, the old town was declared a World Heritage site by UNESCO under the criteria C (II) and criteria C (V):

Criterion (II): Hoi An is an outstanding material manifestation of the fusion of cultures over time in an international commercial port.

Criterion (V): Hoi An is an exceptionally well preserved example of a traditional Asian trading port.

Occupied by early western traders, Hoi An was one of the major trading centers of Southeast Asia in the 16th century and 17th centuries, where Chinese from various provinces as well as Japanese, Dutch and Indians settled down.

No fluorescent lights, no motorcycles, no television, on the 15th day of each lunar month, the riverside town of Hoi An gives modern life the night off.

In a wood-fronted shops a woman in traditional dress sits at a desk, bathed in the light of a lantern made from a simple bamboo fish-trap. Outside, two old men are absorbed in a candlelit game of Chinese checkers. Hoi An, a sleepy riverside town in the central province of Quang Nam. In the air of legendary, just experience the existence by tasting and feeling.

Hoi An has long been a cultural crossroad. More than five centuries ago the Vietnamese nation of Dai Viet expanded its territory southwards, encroaching on the Indianized Kingdom of Champa, which covered much of what is now central Vietnam. Hoi An, located on the Hoai River, emerged when Japanese and Chinese traders built a commercial district there in the 16th century.

These diverse cultural influences remain visible today. Visitors will find Hoi An’s Old Quarter lined with two-storey Chinese shops, their elaborately carved wooden facades and moss-covered tile roofs having withstood the ravages of more than 300 years of weather and warfare. These proud old buildings, which back onto the river, remind visitors of another era, when Hoi An’s market was filled with wares from as far afield as India and Europe. Colourful guildhalls, founded by ethnic Chinese from Guangdong and Fujian provinces, stand quietly, a testament to the town’s trading roots.

While Hoi An’s old-fashioned charm is always visible, on the 15th of every lunar month modernity takes another step back. On these evenings the town turns off its street lamps and fluorescent lights, leaving the Old Quarter bathed in the warm glow of coloured silk, glass and paper lanterns. In ancient times, Vietnamese people made lamps out of shallow bowls filled with oil. Later, foreign traders introduced lanterns, ranging from round and hexagonal designs from China to diamond and star shaped ones from Japan.

Let Hoi An Be Bright

When developing plans to preserve their town’s ancient character, Hoi An residents decided to revive the practice of using coloured lanterns. Starting in the fall of 1998, one night each month is declared a “lantern festival”. On the 15th day of each lunar month, residents on Tran Phu, Nguyen Thai Hoc, Le Loi and Bach Dang streets switch off their lights and hang cloth and paper lanterns on their porches and windows. Television sets, radios, street lights and neon lights are turned off.

In the ensuing quiet the streets of Hoi An are at their most romantic, the darkness broken only by jeweltoned lanterns in all manner of shapes and sizes.

Strolling through the lantern-lit streets is like walking into a fairytale. It is all the more picturesque since motor vehicles are banned from Hoi An’s Old Quarter. On Trai Phu Street, stop at the beautifully preserved Faifo Restaurant to sample some traditional Chinese-style pastries. Or walk on to the Treated Caf6, where bamboo baskets, commonly used to wash rice, have been transformed into unique lanterns. These basket lamps are but one example of people’s creativity as they experiment with new shapes and materials, including lights made from hollow bamboo tubes.

The 15th day of the lunar month is a Buddhist day of worship. Residents place offerings of food and incense on their ancestral altars and visit one of Hoi An’s many pagodas. The scent of incense and the sounds of people singing add to the town’s enchanted atmosphere. On these evenings, visitors will get a rare glimpse into another era. These nights are a welcome reminder of life’s unexpected beauty

Tourists can visit the relics of the Sa Huynh and Cham cultures. They can also enjoy the beautiful scenery of the romantic Hoi An River, Cua Dai Beach, and Cham Island.

At first glance, this ancient town Hoi An might look like a small and quiet town. But visitors be assured that there are a lot of places to visit and things to do in Hoi An. Aside from the popular attractions in town, tourists can easily make day trips or book a day tours to the attractions around the town vicinity such as My Son Holy-land, Cu Lao Cham island or some traditional villages such as Tra Nhieu fishing village or Kim Bong carpentry village… Another thing that can not be missed while staying in Hoi An is to taste as much as you can of its many delicious food. Visitors can join a Hoi An food tour to enjoy their fill or even a cooking class to learn how to make these dishes themselves. To fully enjoy the quiet lifestyle of this town, it is recommended that you hire a bike or join a Hoi An bicycle tour to look around as much as you can while enjoying the refreshing air and the slow-pace life that is a definitely change from your daily life. 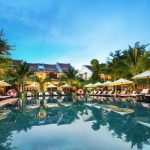 Japanese Covered Bridge – The Legacy Of Ancient Japan in Hoi An