Visiting Hue Imperial Tombs are destinations should be on your travel list beside the must-do walk in Hue Imperial City. There are seven Nguyen Emperors who managed to build their resting homes in Hue. However, with only one day or half a day, we are here to help you choose the Best 5 Hue Imperial Tombs You Must Visit.

Tu Duc tomb is a unique thing to do in Hue for you with a special story. Construction of Tu Duc tomb was built within 3 years under his own ruling term, it’s being known as The Tomb of Humbleness with strong emphasis on nature.

Coming here, visitors will get lost in a labyrinth with the fragrance of flowers and the soft sound from the royal music show. No doubt, this place used to serve his elegant pleasures of the emperor. Thus, a nostalgic and artistic space is what you will feel when visiting one of the top famous tomb in Huế.

The 8-kilometre from city center Tu Duc tomb makes it the most easily accessed tomb by motorbike, car and bus. Furthermore, an impressive renovation in this Hue attraction turns it into visitors’ favorite Nguyen royal tomb to visit.

Another side note is on way to Tu Duc you will visit incense village, a beautiful village hidden under the foot of Vong Canh Hill and embraced by the romantic Perfume River. Finally, it takes around an hour to walk around the entire of Tu Đuc tomb and you will absolutely not regret for this journey.

The second most-visited imperial tomb in Hue is the Khai Dinh Royal Tomb. It is a proud work of Khai Dinh himself combining both Western and Oriental features. Furthermore, the well-decorated artworks in Khai Dinh tomb also make it a rare gem of Vietnam art and architecture in the early 20th century.

When doing a self – exploration in here, the visitor can easily see that it comprises five consecutive terraces connected by 127 steps. Until now, the unique beauty of Khai Định tomb still preserves well for more than 100 years.

Khai Dinh’s location is stunningly leaning on the side of a hill, named Mount Châu Chữ which is about 7 km from city center. Finally, you can quickly conquer this special Hue royal tomb in 40 minutes. Thus, it is definitely an Hue attraction that you should not miss.

The Hue Imperial tomb of Minh Mạng (known also as Hiếu Lăng) is the last resting place of the second Nguyễn dynasty, Emperor Minh Mạng. Surprisingly, this is on top 4 places to visit Hue city if you are a history buff. Considered to be the largest tomb in Hue with an impressive lake and monument systems, Minh Mang Tomb attracted visitors for its nature and historical value.

Just about an hour, you will have a great chance to learn about the history of Vietnam as well as explore the original beauty of a magnificent work under Nguyen dynasty.

Although traveling by car or motorbike is easy and convenient today, it’s not a bad choice to take a two-hour boat trip from Hue to visit this tomb. It is about 18 kilometers to the southwest and is the third-most visited Hue Imperial Tombs by visitors.

Most visitors often choose to visit Tu Duc, Khai Dinh and Minh Mang tombs in their half a day tour in Hue. However, you can consider to replace one of the above with one of these stunning hidden Hue tombs below:

The non-touristy Nguyen royal tomb in Hue is the Gia Long Imperial Mausoleum or Thien Tho tomb complex. The fact that this extraordinary tomb complex of Vietnam Founding Father, is praised to be best-kept architectural secret in Hue.

Built at a valley surrounded by spectacular mountain ranges with a rarely-seen double grave of Emperor and his Empress, visitors can relax in a quiet but poetic space to reflect on the successes of life as well as the honor of the first king of the Nguyen Dynasty. Finally, if you want to enjoy the scenery in quietness, Gia Long tomb should be definitely on your attraction list in Hue.

Getting to Gia Long Tomb

As the furthest tomb in Hue, about 18 kilometers in the upstream of Perfume River, the best transport to visit Gia Long tomb is by private car or arranged tour. The non-touristy side of it will reward those who break from the crowd to have a unique experience in Hue.

The last Hue imperial tomb worth to mention for your Hue city tour is the Thieu Tri tomb. Built by his successor, Tu Duc, after the death of his father, it took 9 months to finish. Known as the Tomb of Goodness, its un-walled resting place in the middle of a large paddy field make it the most noticeable and accessible one in the West of Hue.

Although Thieu Tri mausoleum has some similar features with other Nguyen Royal Tombs, it still has its own characteristics and can be considered a unique Hue attraction.

Getting to Thieu Tri tomb

It locates only 6 kilometers from Hue Center. There are not many bus tour option. Only with private tour,Grab Car and motorbike rental will get you to this site.

For many visitors who have only one day in Hue, it is hard for you to squeeze all the beautiful Hue imperial tombs into your Hue travel plan. Thus, we recommend you to pick 3 out of 5 these best to visit Hue Royal Tombs, as said above.

Furthermore, we’d like to give you some best ways to visit Hue Royal Tombs to make the most of your time in Hue.

By combining in a Hue full day tour

There are many ways for you to get around in Hue but the best choices for you to visit Nguyen emperor’s mausoleums in Hue city is hiring Hue private car or joining a tour.

In particular, Hue Full Day City Tour or the Nguyen Emperor Tombs Tour is a perfect options for you and your family to see these outstanding Hue royal tombs during your short time in Hue.

Secondly, for visitors who like to be tomb hunter, you can choose motorbike option. Rental motorbike is also very popular in Hue City. Hence you are completely assured about transport for your journey.

However, if you are not familiar with the road in Hue, do not forget to bring your phone and use map online to avoid getting lost. With this option, you can be a tomb hunter in 6 hours.

By booking a Hue Bus Tour

The last way to get to Hue Royal Tombs is by bus. You want to see the beautiful scenery but you don’t want to deal with the crazy traffic in Vietnam, the Hue City Bus Tour is probably the best choice. Moreover, traveling by bus is quite safe and comfortable. However, this option does not take you to visit Gia Long or Thieu Tri tomb. Furthermore, you have to accept that you will have limited time to visit a specific Hue tomb, and, most of the time, it’s pretty crowded in a bus tour. 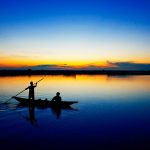