Cao Bang has a lot of potential for tourism growth, including tours to Pac Bo, Lam Son temples, Tran Hung Dao park, Dong Khe historical monument, the basement of the fort in Cao Bang city, Ban Doc waterfall, Nguom Ngao cavern, Thang Hen lake, and border gates. Furthermore, there are several ethnic groups in Cao Bang, each with their own unique rituals, customs, and festivals, which is beneficial to tourism growth. Cao Bang Province is situated in the Far North-East and borders China to the north and east, Bac Kan and Lang Son provinces to the south, and Ha Giang and Tuyen Quang provinces to the west. Because of the complicated topography, inter-transportation is limited. The cool weather combines with many high mountains and stunning scenery to form a convenient for relaxing and exploring tour. Thang Hen Mountainous Lake in Tra Linh, Ban Gioc Fall, and Nguom Ngao Cave in Trung Khanh are all well-known attractions. Among them, Ban Gioc Dropping is most definitely Vietnam’s most spectacular waterfall. Pac Bo, Coc Bo Cave, Lenin Dam, and Khuoi Nam Stream are among the areas where Uncle Ho lived and worked prior to the August 1945 Revolution. Popular festivals in Cao Bang have ethnic features, such as the Long Tong Festival and the Inviting the Moon Mother Festival (Moi Me Trang). 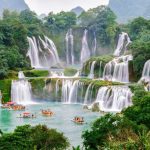