Home » Travel Blog » My trip to Singapore — How to spend 4 days in Singapore?

My trip to Singapore — How to spend 4 days in Singapore?

What would you do if you had four days in Singapore? For me, I’d rather explore this Lion nation via metro because it would save me a lot of money while also exposing me to Southeast Asia’s most sophisticated metro system. Let’s have a look at my journey to Singapore – How to Spend 4 Days in Singapore — to learn more about this lovely and lively country.

Jetstar Airlines planes arrive at Changi Airport’s Terminal 1 in Singapore. After completing entrance formalities and following the indications for the Skytrain to T2, I transferred from Terminal 1 to Terminal 2 in order to take the metro to the city center. At Terminal 2, follow the Train to City sign, take the elevator down, and then turn left approximately 50 meters before the Terminal 3 entrance gate. Go down to the basement, where we can view Southeast Asia’s most advanced metro system. I stood in line in front of the customer service counter to purchase an EZ Link card to begin my adventure.

To use the Metro (also called MRT) from Changi airport to Clarke Quay, I travel from MRT Changi Airport CG2 to MRT Tanah Merah EW4. When the metro stops at Tanah Merah station, I get off and take Joo Koon metro to Outram Park, where I transit to Punggol and get off at Clarke Quay. It takes about an hour from the airport to the city center. 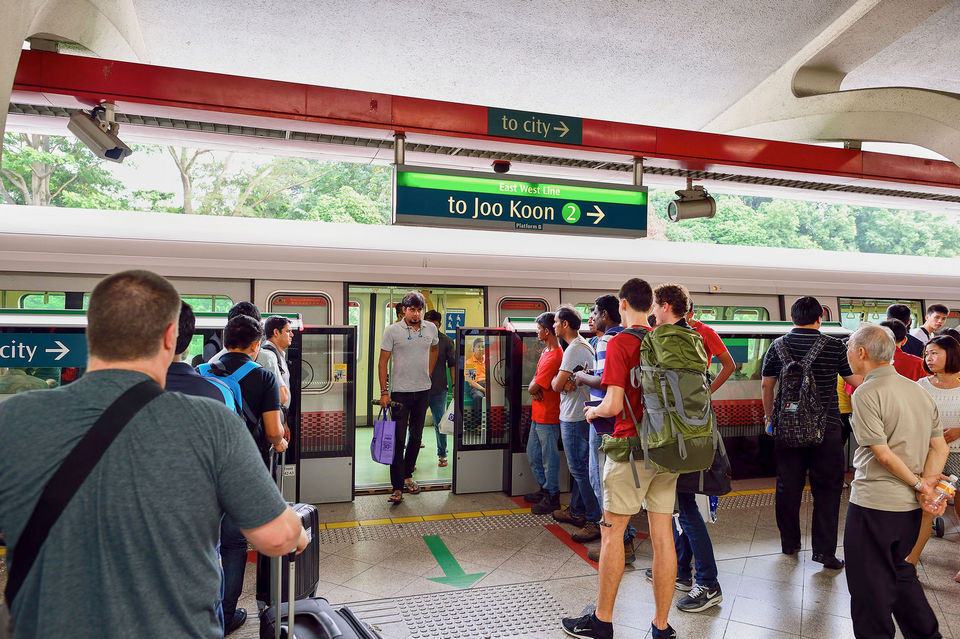 To get to grips with the ethnic groups in Singapore, I tour around United Arab Emirates, Little India streets and Chinatown.

I proceed to Little Indian Street after exiting MRT Little India station, which used to be a major location for Middle Eastern merchants. This roadway is designed in Islamic and Middle Eastern designs. Every day, both residents and tourists visit this location. The street sells Muslim women’s clothing, hijabs, and accessories. Furthermore, owing to its floral designs and colors, carpet is a popular commodity among customers in this area. Stores on Serangoon Street sell a wide range of clothing, footwear, watches, hairpins, jewelry, and wreaths. Small stores are painted in a variety of colors and have eye-catching neon signs. Jewellery is priced at 10 SGD for three items here. 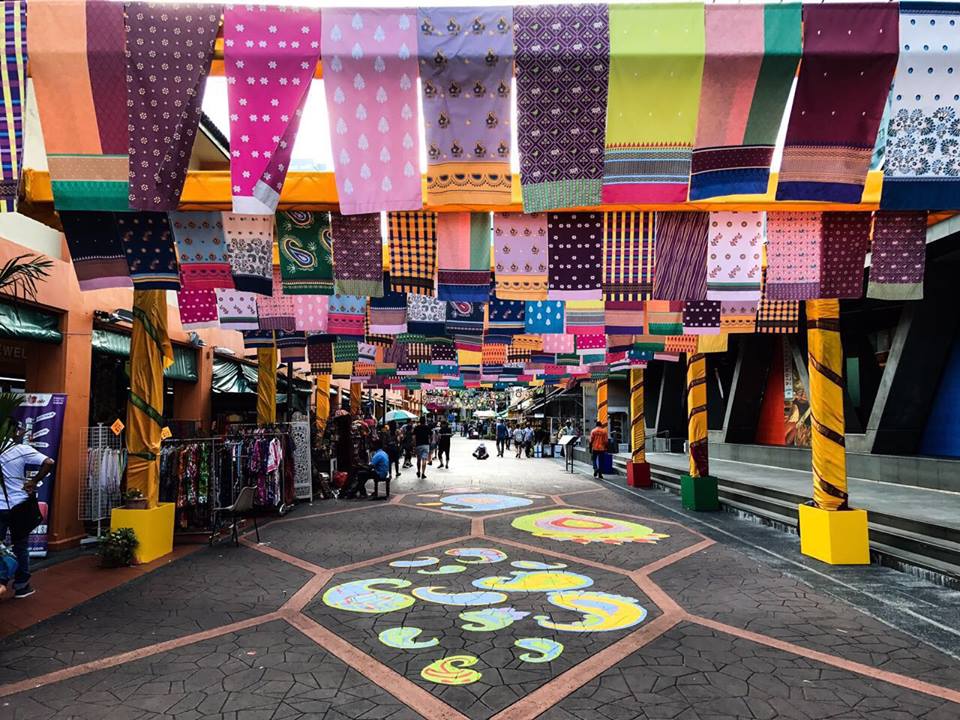 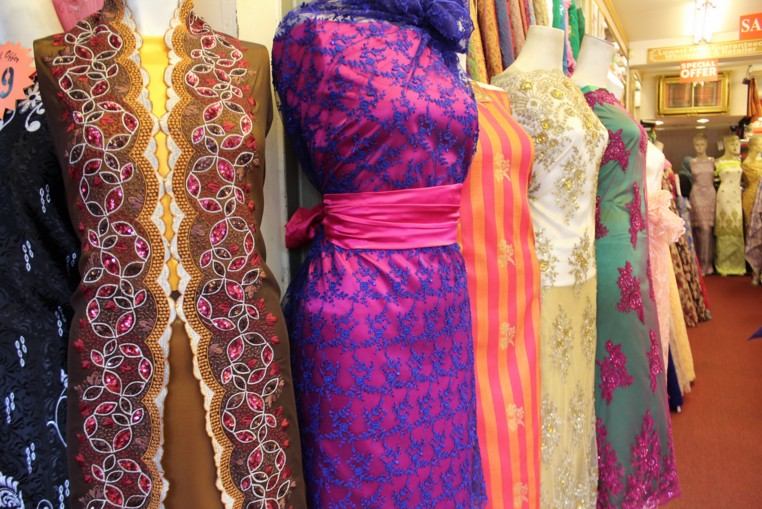 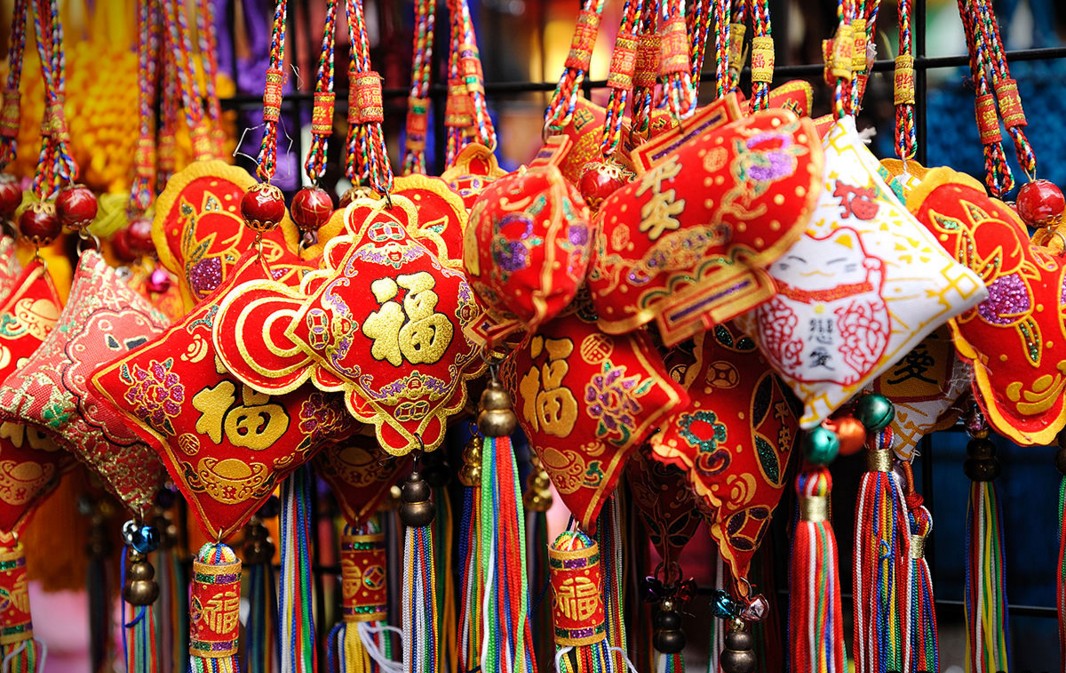 If you visit Chinatown, you must see the holy Buddha Tooth Relic Temple. This temple is now regarded as a modern Buddhist aesthetic museum with exceptional architectural style. Stepping through the huge gate, I leave the sweltering atmosphere of this tropical area behind me and enter the temple’s cooling system, which makes me feel better after a hard day of traveling.

The temple is constructed in the Mandala style and in the Tang period (China) architectural style to reflect Buddha’s notion of the “growing cosmos.” The temple has five levels and a basement. Visitors can take the elevator to the upper levels and borrow scarves to wrap over themselves if they are wearing shorts or skirts. Each level has a huge altar with three enormous Buddha sculptures in the main hall. A line of tables in front of the main hall display glass cups holding candle and scented jasmine chains donated by guests. Hundreds of tiny Buddha sculptures are set around the walls.The magnificence of the temple lies in the altar space which is built high with two dominant colours, yellow and red.

Here in the temple, I can enjoy a peaceful ambiance while contemplating the works of Buddhist Relics.

The Esplanade Theater is Singapore’s pride and joy due to its unique construction in the shape of a durian. As a result, the theater is also known as the Durian theater. This is the most impressive artistic stage, with a seating capacity of 2000 and a music hall seating 1,600 people. The theater also features a studio, a library, an outdoor arts center for weekend performances, commerce centers, and dining sections.

Surprisingly, Helix Bridge, Singapore’s longest pedestrian bridge (280m), is the world’s first helical double bridge. Like an ADN structure, opposing steel arcs are linked by numerous bars. Marina Bay’s wealth and pleasure are symbolized by the bridge. I can get a panoramic view of the bay from the bridge. This is a great place for both locals and tourists to get some fresh air and enjoy excellent ice cream at the low price of one Singapore dollar.

Merlion Park, located beneath the Helix Bridge, is considered as a “Welcoming emblem in Singapore.” The Merlion monument is 8.6m tall and weighs 70 tons, with the head of a lion and the body of a fish surfing the waves. The Merlion is the national personification of Singapore and is utilized as a mascot. The water gushing from the Merlion’s mouth symbolizes prosperity and good fortune. I take use of this opportunity to snap several photographs with the Merlion, such as using my hands to collect the water or opening my mouth to sip the Merlion’s wealthy water. 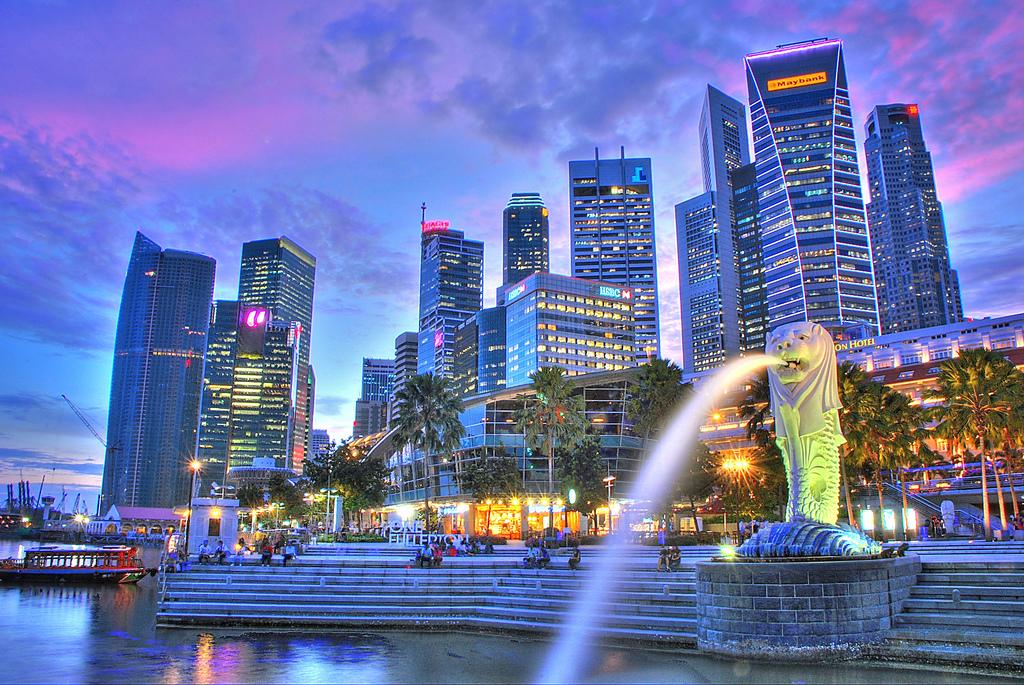 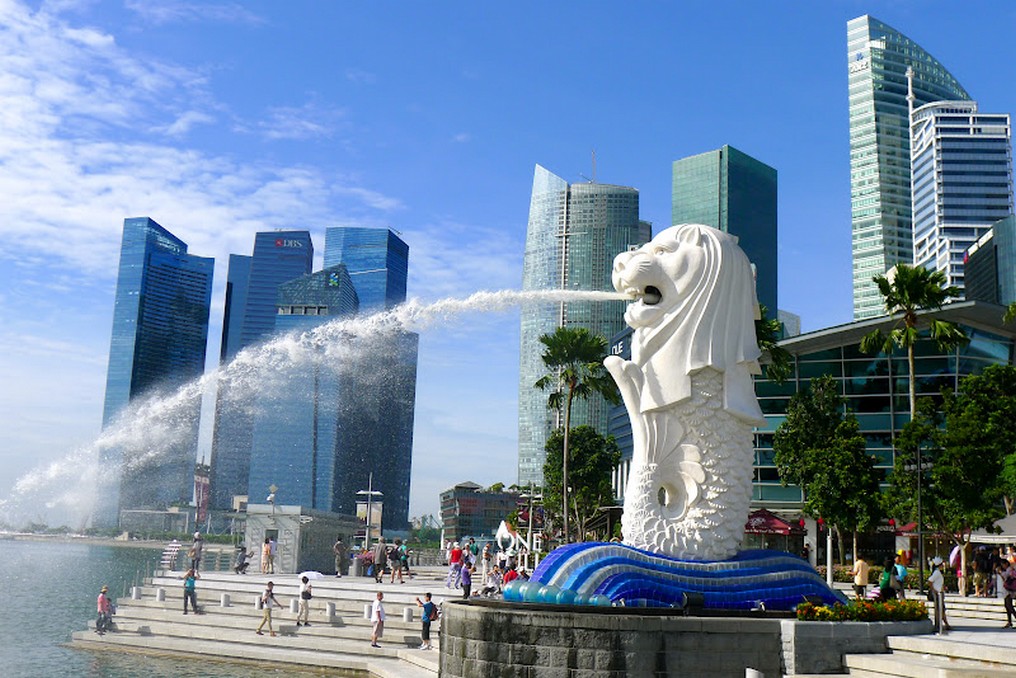 At the conclusion of the day, I had the chance to see Singapore from a beautiful vehicle. I’m on an escalator that connects five-star hotels to the Cavenagh historic bridge at the Boat Quay dock. The escalator leads me through tunnels lined with glass and adorned with pictures of Singapore and hotels, as well as pleasant yellow lighting. This is comparable to a contemporary and romantic speed train. I next take a short walk down the riverbank to Clarke Quay. This is an intriguing shortcut! 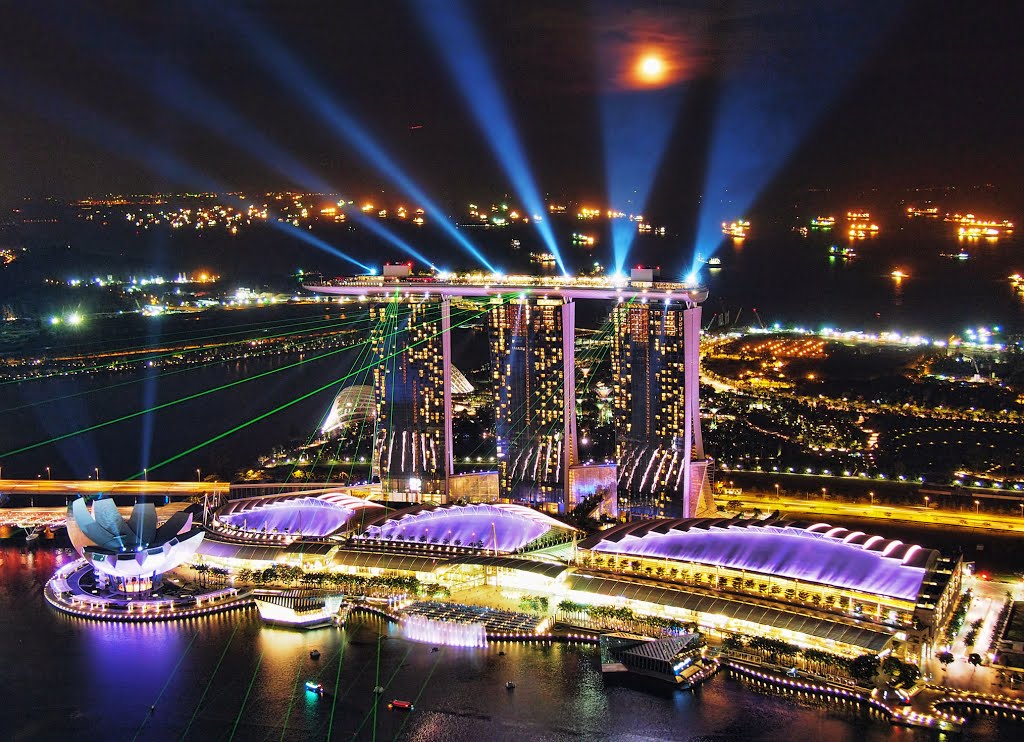 It takes about an hour to get from Clarke Quay metro station to Bayfront. From here, you can visit Gardens by the Bay and Marina Bay Sands.

The underground path is rather long (about 1km) from the station to Gardens by the Bay. Both sides of the path are pressed with glass and colorful flowers. If you walk outside Gardens by the Bay, you will not have to pay any charges. However, if you go inside the two glass green houses named Flower Dome and Cloud Forest, you have to pay 28SGD. 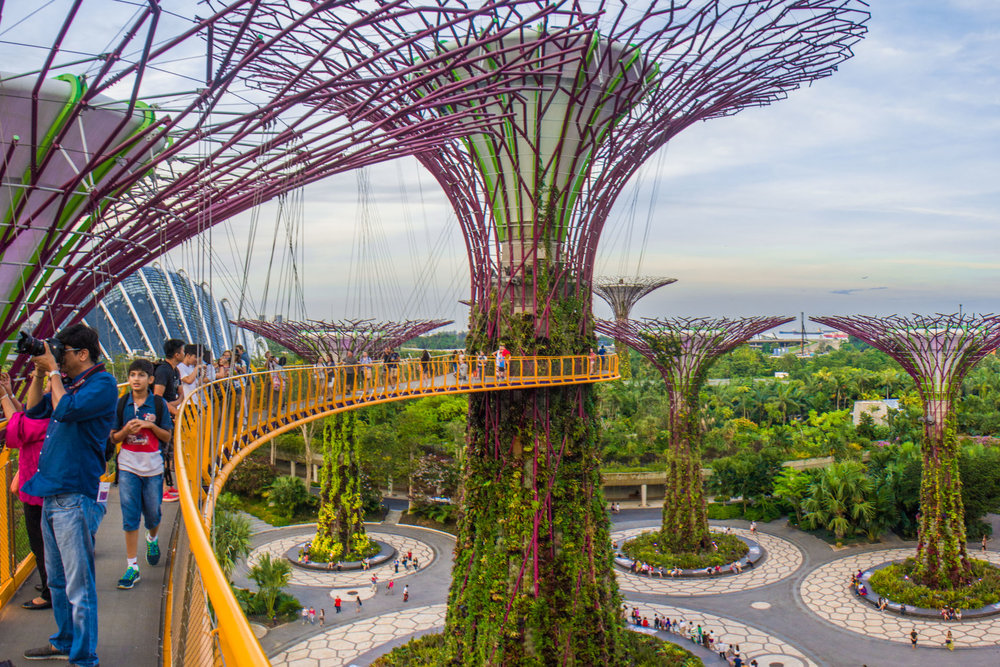 To get a bird’s-eye view of the garden, I walk across the 22-meter Skywalk bridge, which is surrounded by 50-meter solar “super-trees” made of steel and cement. When night falls, these “super-trees” will be illuminated with creative lights that change colors on the fly, accompanied by melodious music. I could spend hours roaming around this location admiring the beauty of the trees and flowers displayed in the green homes.

I return to Bayfront Street and arrive at Marina Bay Sands. This is a complex that includes a hotel, a casino, and a posh shopping center designed in the shape of a maze. I’m drawn into the building by the sparkling boutiques and eye-catching décor. A transparent pond within the structure is meant to resemble a river in Venice. I rent a small boat and cruise around the building looking at high-end stores. 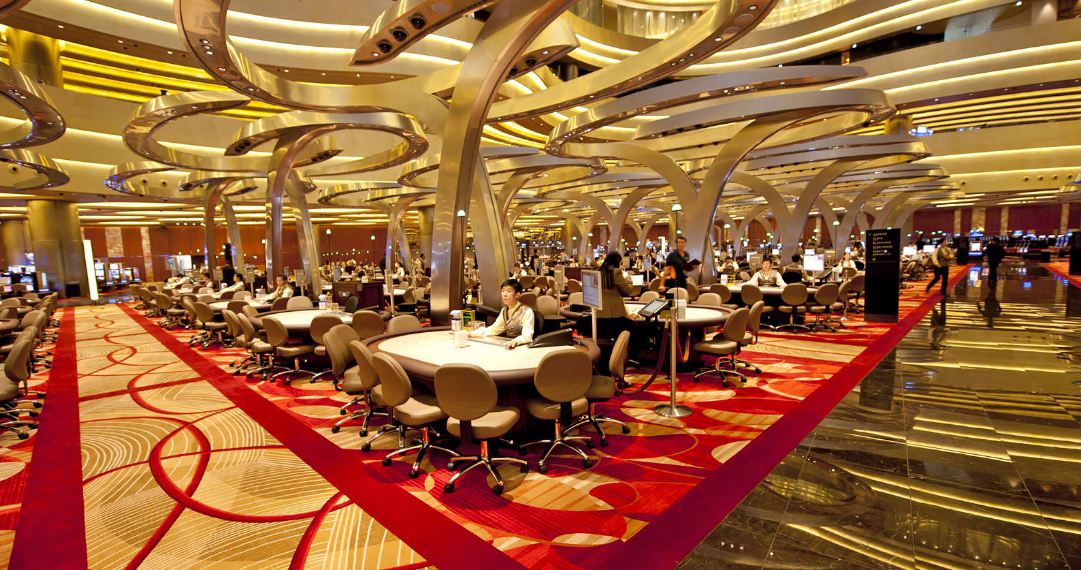 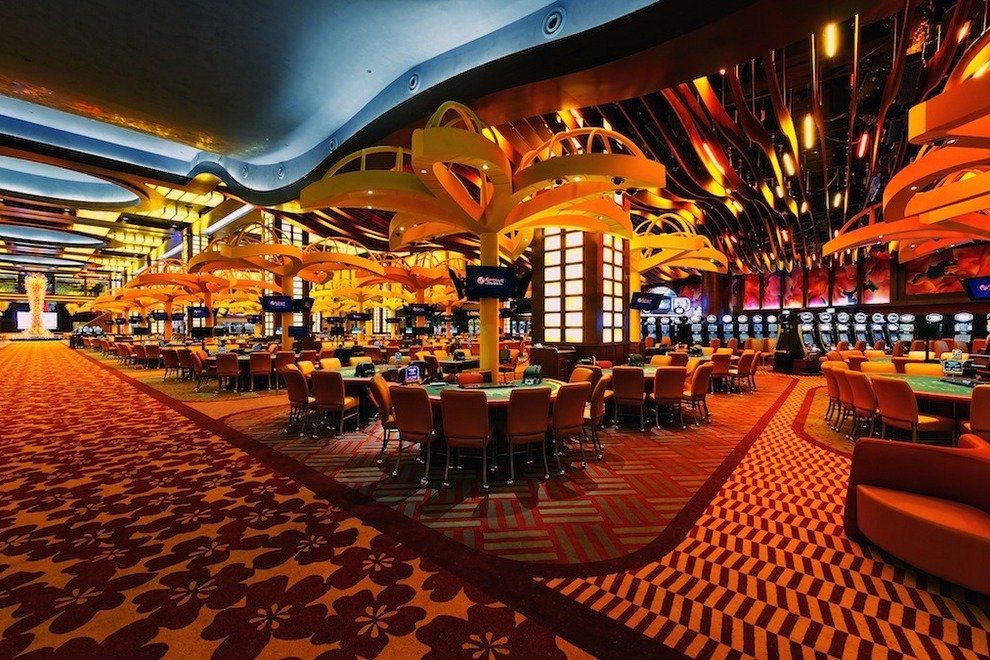 There is a large crystalline funnel pond in front of Marina Bay Sands’ main entry gate. Singaporeans think that if they toss a penny into the pond, their wishes would be granted. The coin will tumble to the bottom, leading to Venice’s water and retail center.

On Saturday and Sunday evenings, the retail center’s outdoor space is filled with locals and visitors who come to enjoy fantastic free entertainment. Water, light, and sound are examples of these. The curriculum emphasizes the significance of strong ties between family members and ethnic groupings. 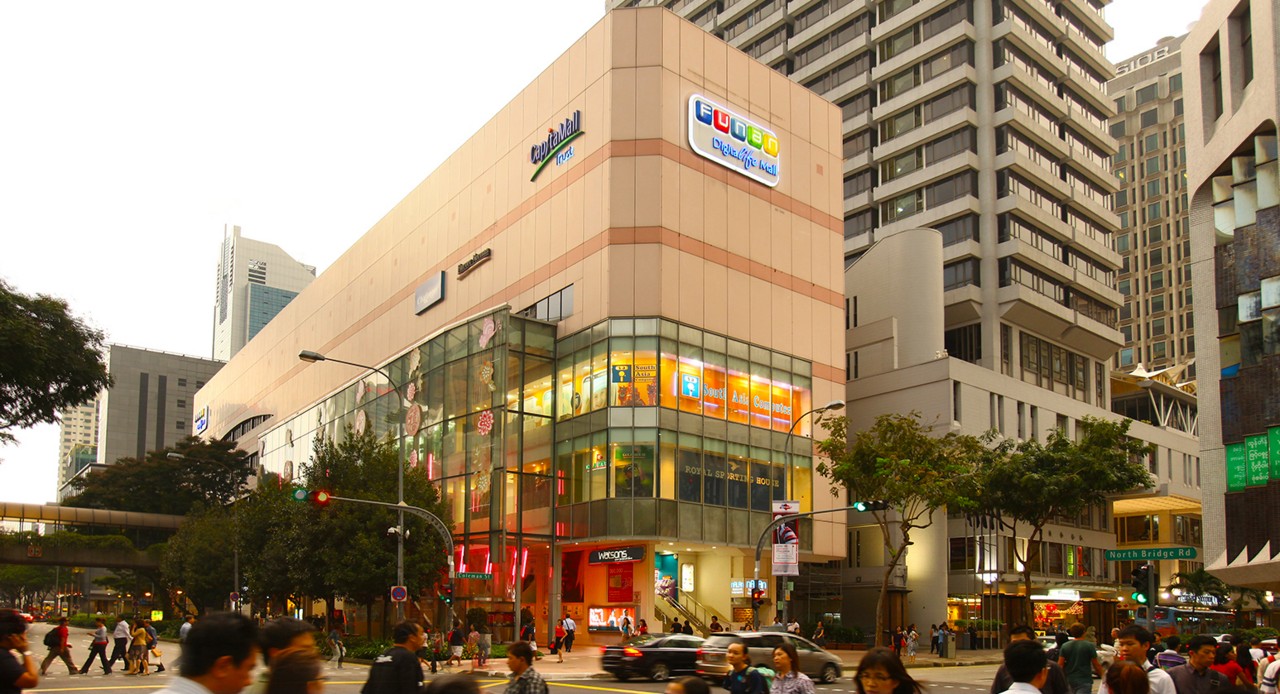 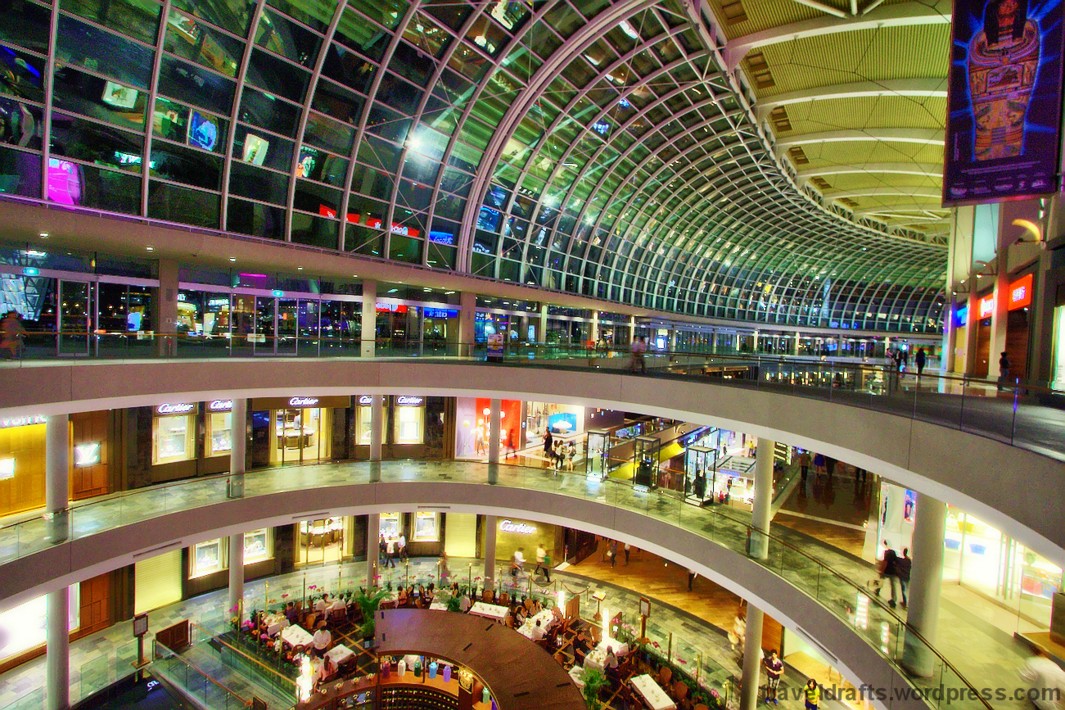 For my last day in Singapore, I stroll around Sentosa because all tourists in Singapore visit this vivid island.

From Clarke Quay MRT, passing through Chinatown and Outram Park stations, I get off at HarbourFront to take another metro to the entertainment center in Sentosa. At HarbourFront, I go up to the ground to the top floor of Vivo City commercial center to take the metro to Sentosa.

Sentosa is a natural island featuring famous recreational activities with the enormous statue of the Merlion, 4D cinema center with frightening movies of pirates, underwater world, maritime museum, dolphin circus center, water music stage, fireworks and two beaches. Visitors can tour around the island with free vehicles that are convenient for guests to travel to their favorite attractions. 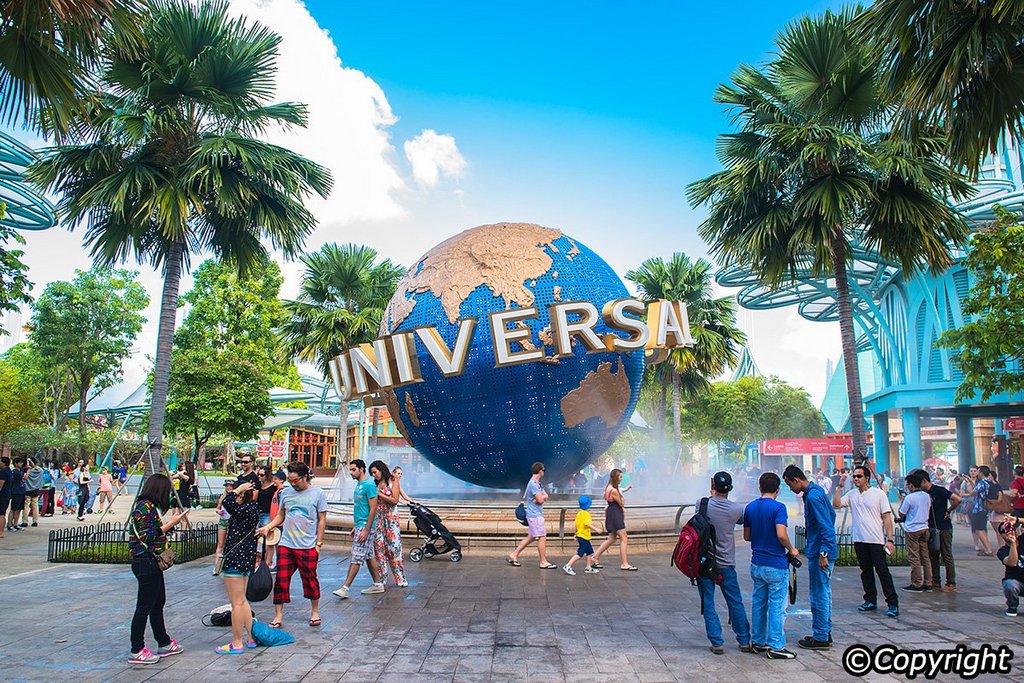 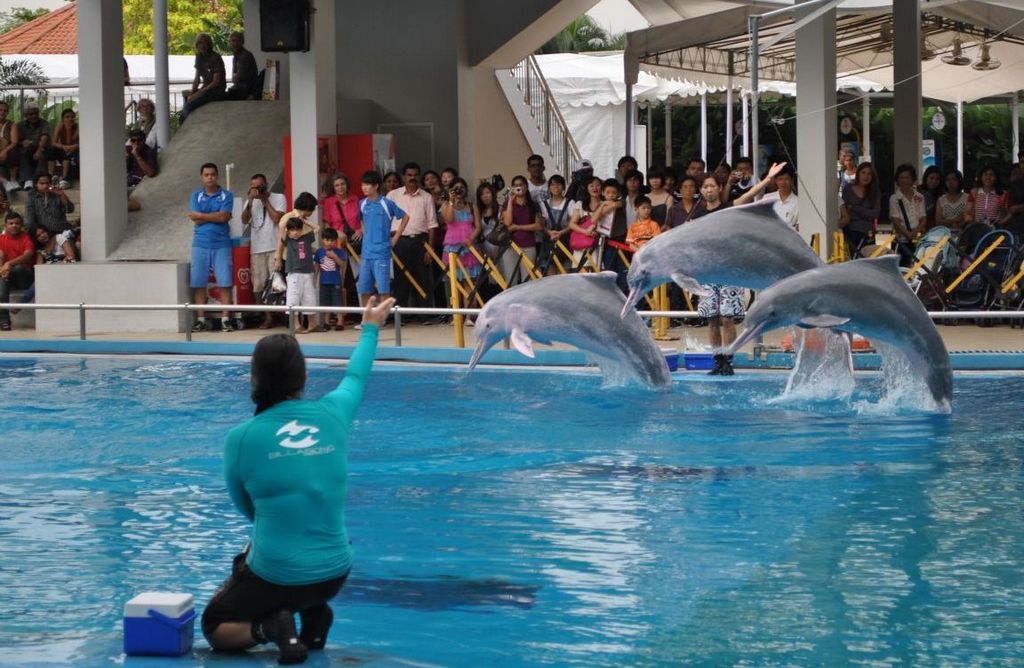 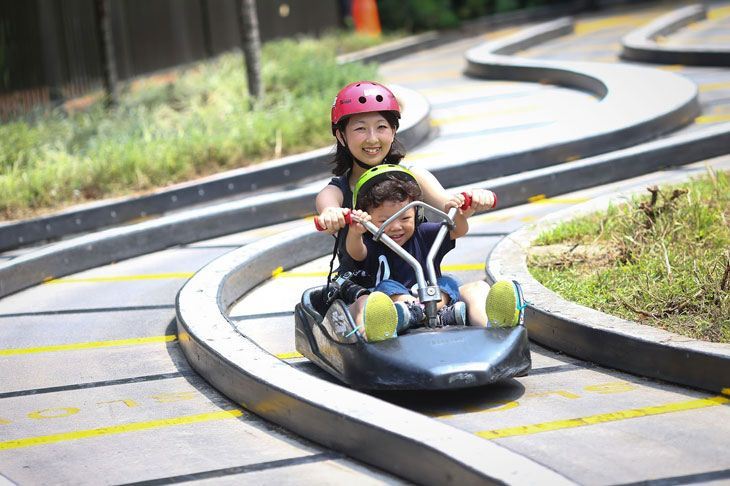 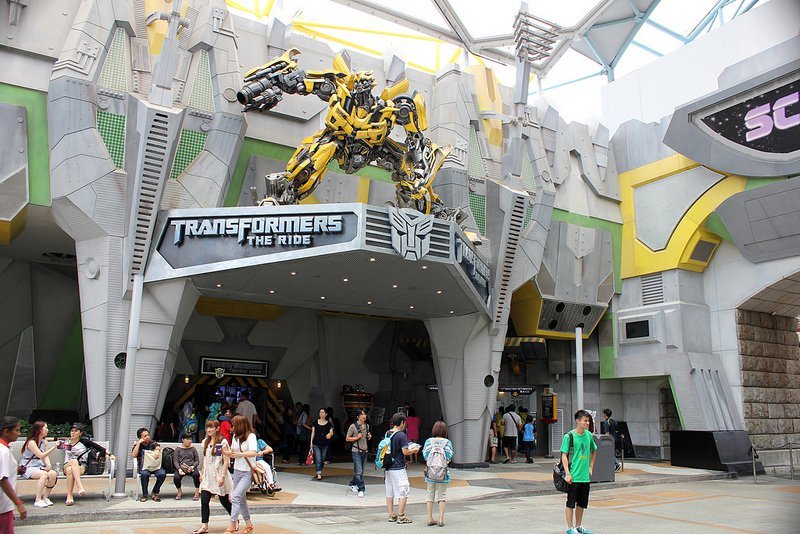 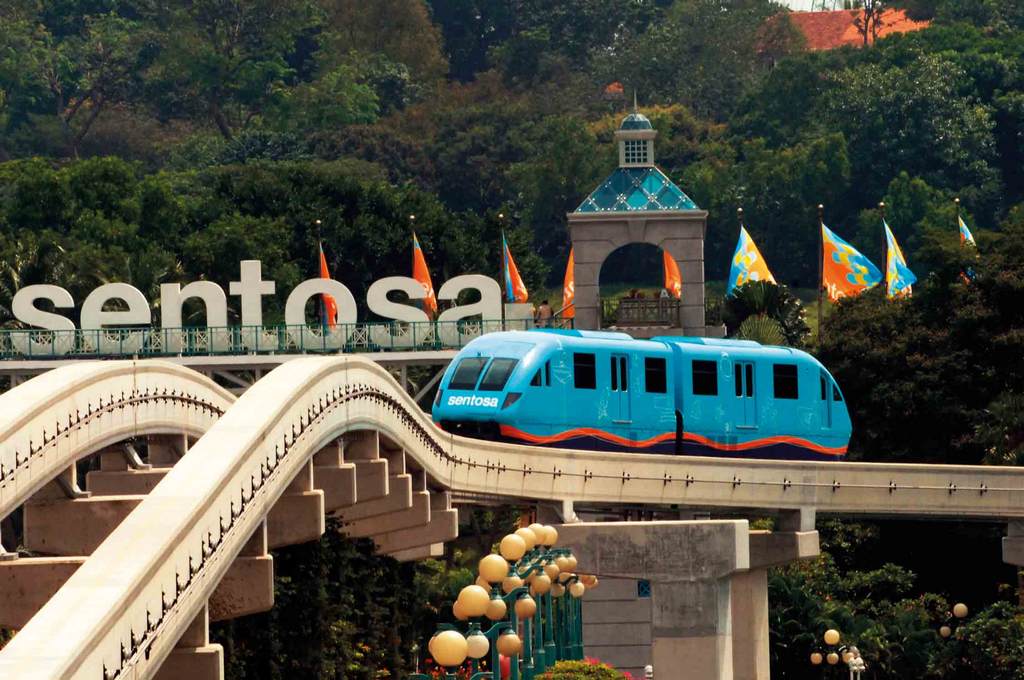 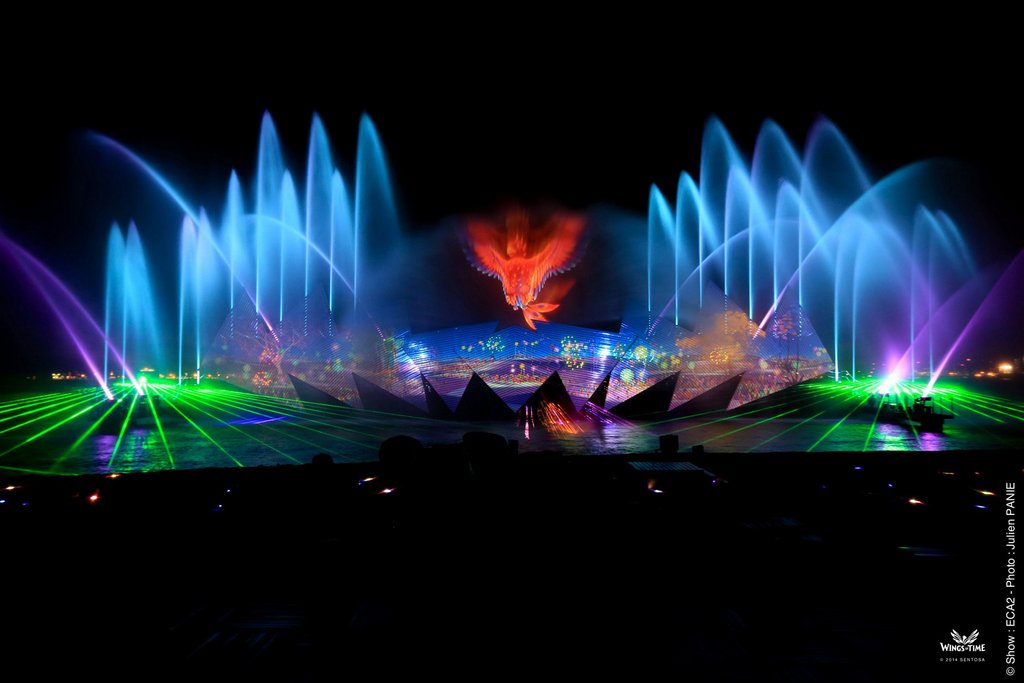 A guide to the Mekong Delta, Vietnam