How to Experience the Authentic Side of Phuket

With its powdery palm-lined beaches, spectacular scenery, stunning tropical sunsets and gin-clear turquoise waters, and of course, that famous Thai hospitality, it’s no wonder that Phuket is a favourite destination for Australian travellers. And while Thailand’s largest province has responded to its rapid tourism growth with a multitude of western-style tourist attractions and nightlife, there are still plenty of places where you can still find a slice of the authentic Phuket.

I start my exploration in Phuket’s Old Town, which is jam-packed with Chinese, British, French and Portuguese influences, evidence of the tin merchants that occupied the island a century ago.

Wandering along Thalang Road, one of Phuket’s oldest streets, I get a taste of local life and the city’s rich heritage on a walking tour. I browse the character-laden mix of quaint shops, cafes, and Thalang National Museum; but the real charm is in the small alleyways that run off the main road, with treasures such as the ornate Shrine of the Serene Light Chinese temple, and the Buddha amulet market, where I bargain hard for a good luck charm for the rest of my journey.

It’s hard not to get swept up in Buddhist culture in Thailand, you’ll find temples and shrines everywhere you go, including the tiny ‘spirit houses’ that adorn the streets. There’s around 28 major temples (called ‘wats’) on Phuket, including one hidden inside a cave, so it’s well worth visiting a few.

It’s impossible to miss the Big Buddha, visible from more than half of Phuket, but even better is a pilgrimage up the winding road through terraces of banana trees to the foot of the giant deity. Up here, all you hear are the tinkling of bells and the Buddhist prayer flags flapping in the winds blowing off the Andaman Sea. Even if you’re not into religion, the views from the top of the hill of Chalong Harbour, Kata Bay and Karon Beach are more than worth the effort. If you are interested in experiencing Thai culture – the most impressive Buddhist temple is Wat Chalong, which is dedicated to two monks who used their knowledge of herbal medicine in the late 1800s. You’ll need to remove your shoes, so don’t wear your best ones.

The island’s centre is brimming with lush green vistas and waterfalls and places where the jungle kisses the water’s edge. There’s no better to soak up the sublime scenery of Phang Nga Bay than from the water, so I board a trip from beach to bay by traditional long-tail boat, marvelling at the limestone cliffs jutting out of the emerald waters, and the flawless view of the colourful coral reefs below. We pass Khao Phing Kan, nicknamed James Bond Island because it featured in the 1974 spy film The Man with the Golden Gun.

All that sightseeing works up an appetite, and the aromas of Phuket’s tastiest temptations hit me before I even see the menu at Old Siam Authentic Thai Restaurant housed in an old teakwood house right on Nakalay Beach. Thai green curry, pad Thai, fried rice and the tasty national soup, tom yum, and other ‘royal-inspired’ cuisine, the hardest part is what to choose. I’m so inspired by the perfectly balanced flavours of real Thai cuisine, that I sign up for a home cooking class the next day to learn more.

But Phuket’s star attraction will always be its beaches, and catching a tuk tuk back to my accommodation at Karon Beach, the sand is white and soft between my toes, and squeaks when I walk on it. Seems like that amulet has worked a charm. 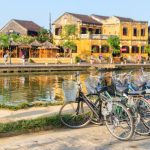