Cu Lao Thu islet (Autumn islet, Thu islet) is another name for Khoai Xu islet, Thuan Tinh Island, or Phu Quy island. The locals refer to it as an “islet,” whereas the French refer to it as Pulo Cecir de Mer. Whatever its name, this is a magnificent Binh Thuan destination. Sail a boat to the sea to experience nature’s enchantment and the Creator’s might be in awe among the ocean.

The way to Thu islet is rather complicated. From Saigon, travel 200km to Phan Thiet beach city. Then, from Phan Thiet wharf, go on a boat for about 7 hours to the remote island. The Binh Thuan 18 boat surfs the waves to the island. Waves of 6 or 7 meters in height hit the boat so strongly that even sitting on the third floor we are shaken. The boat is like a small leaf in the anger of the immense ocean that makes my friend travel sick. I fall asleep in the swinging feelings and am woken by the horn signing that we have arrived at the island while the sun is setting behind the horizon. Mr. Vy – the “island expert” and Tam, his daughter welcome us at the wharf. We stay at their house to start for the following day discovering the new land amidst this massive ocean. 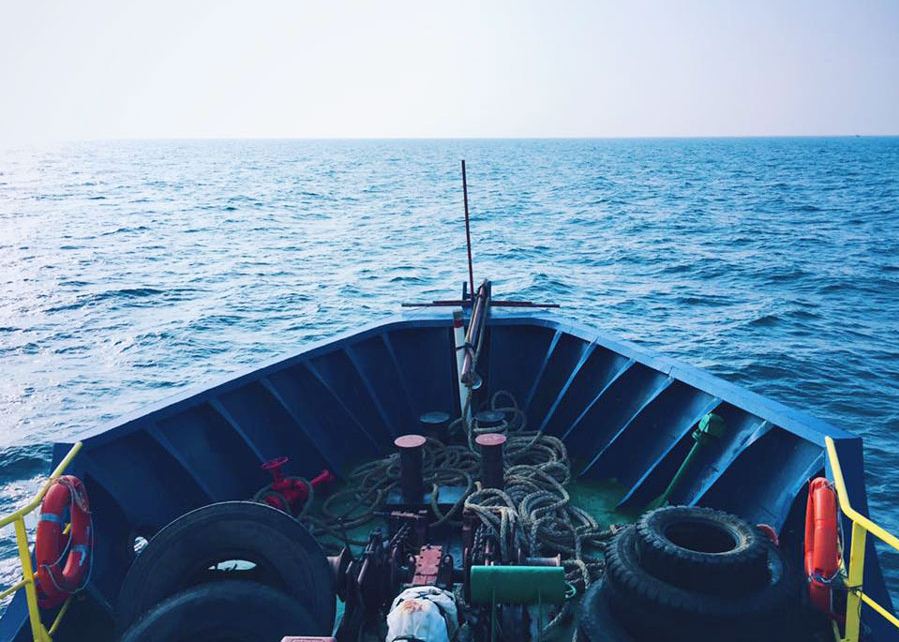 Expanding an area of 16km2, Phu Quy island of Binh Thuan is about 540km from Truong Sa archipelago in the northwest and 150km from Cam Ranh, Khanh Hoa in the South, 330km from Con Dao in the Northeast, and 200km from Vung Tau in the East. Apart from the main island, Phu Quy island is also surrounded by other islets such as Da Cao islet, Hon Do, Hon Tranh and Hon Hai. Phu Quy district includes three communes: Long Hai, Ngu Phung, and Tam Thanh. According to history, the island was known as Co Long or Thuan Tinh Island. From the fourth Thieu Tri period (1844), the island was renamed from Tong Ha to Tong Phu Quy in the present Tuy Phong, Ninh Thuan, Binh Thuan for its economic potentials and various specialties. At present, Phu Quy is a remote island district of Binh Thuan province. 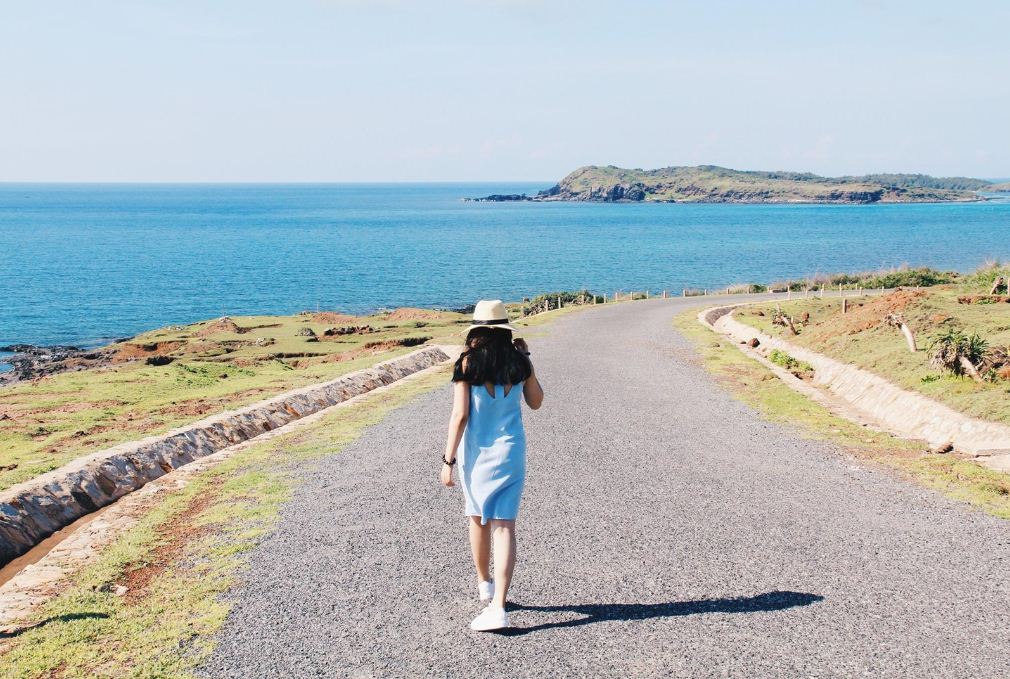 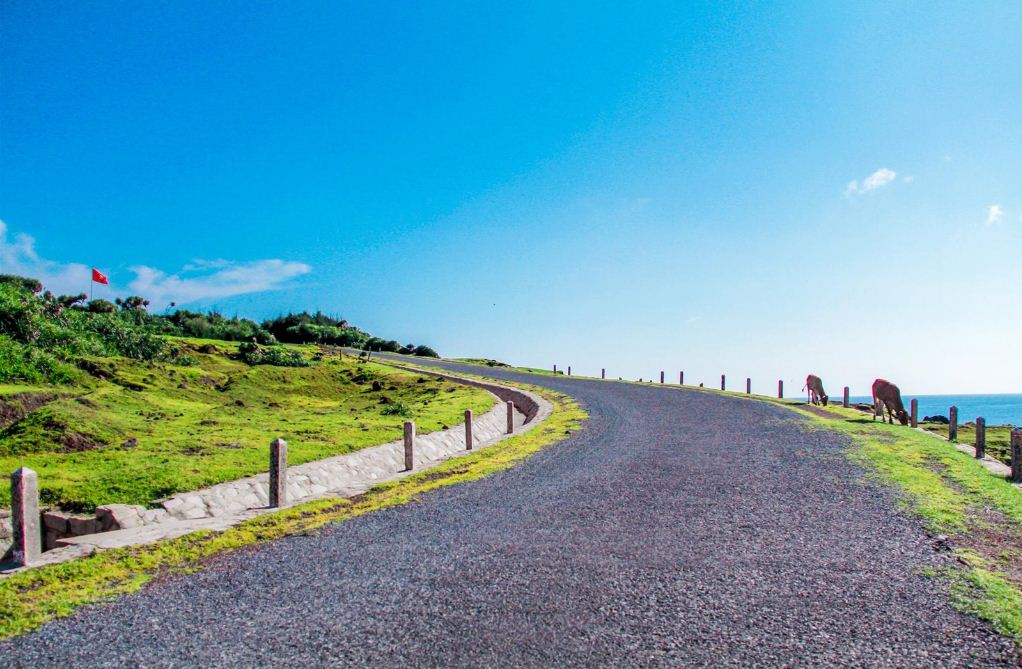 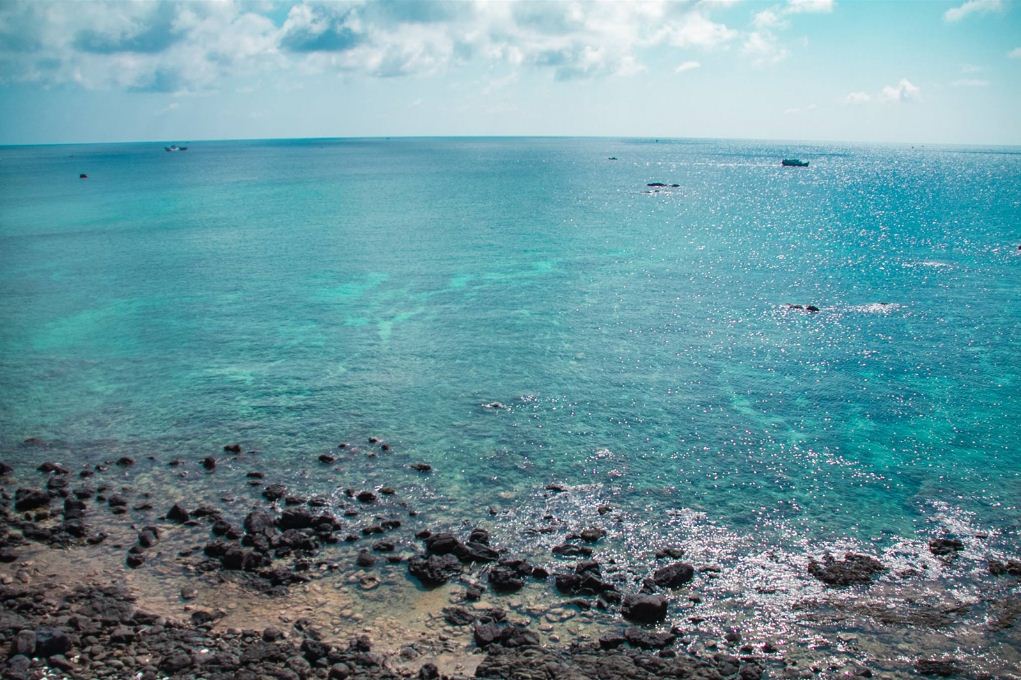 The following morning, after having a delicious breakfast at Long Vi restaurant, Mr. Vi takes us to tour around the island. Firstly, we visit teacher Nai’s tomb. Built in Dong Hai hamlet, Long Hai commune in 1665, this tomb has been connected closely with the spirit life of Phu Quy’s local people. It was said that teacher Nai was a general of the army, who was very good at astronomy. When knowing that the dragon often appeared on the island, he stayed here and helped the local people. After he died, he was buried on this island. Local people of later generations believed that he would bring them good luck, therefore, they built a temple to worship him. Standing on the cape and looking over the sea with white surfing waves, you can feel relieved from tiredness and pressures of daily life.

With a motorbike, we ride around the island. Passing by a high slope, we reach the peaceful Trieu Duong beach. The beach with smooth sand is regarded as the most romantic beach on the island. An arc formed by the cliff protects the beach from the anger of the sea. Here and there, girls play on the sandy bank and boys go fishing with a rope and a small fish-hook. Incoming waves wash away the footprints in the sand as well as the worries of daily life. 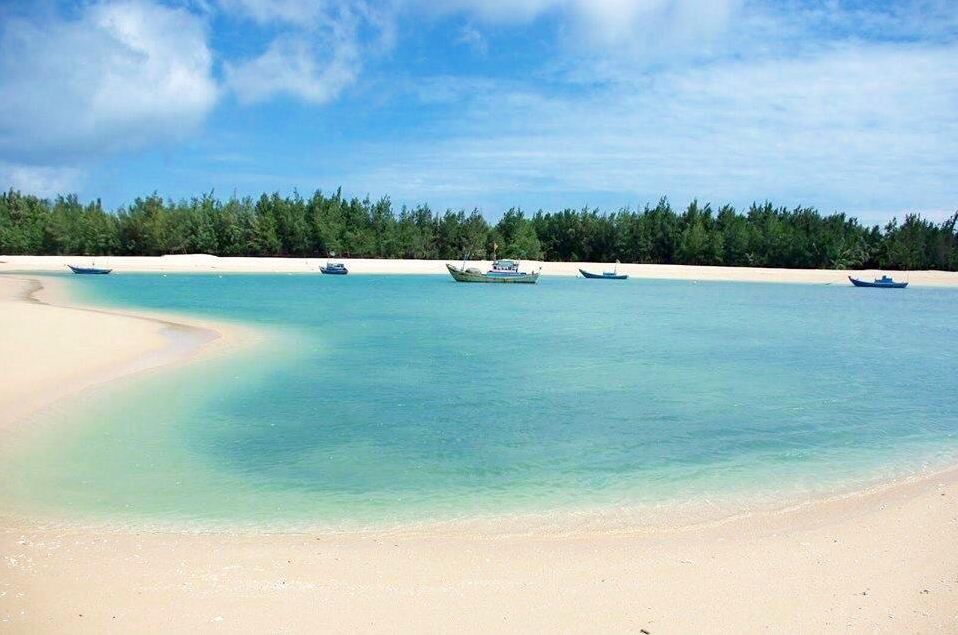 Here and there, girls play on the sandy bank and boys go fishing with a rope and a small fish-hook. Incoming waves wash away the footprints in the sand as well as the worries of daily life.

Leaving Trieu Duong, we stop at Cao Cat mountain with the original Linh Son pagoda, a part of which was built in the cliff, and huge electric plants providing electricity for the whole district. Then, we wander around Doi Dua, Doc Cai beaches or witness the daily life of local people in Van An Thanh. 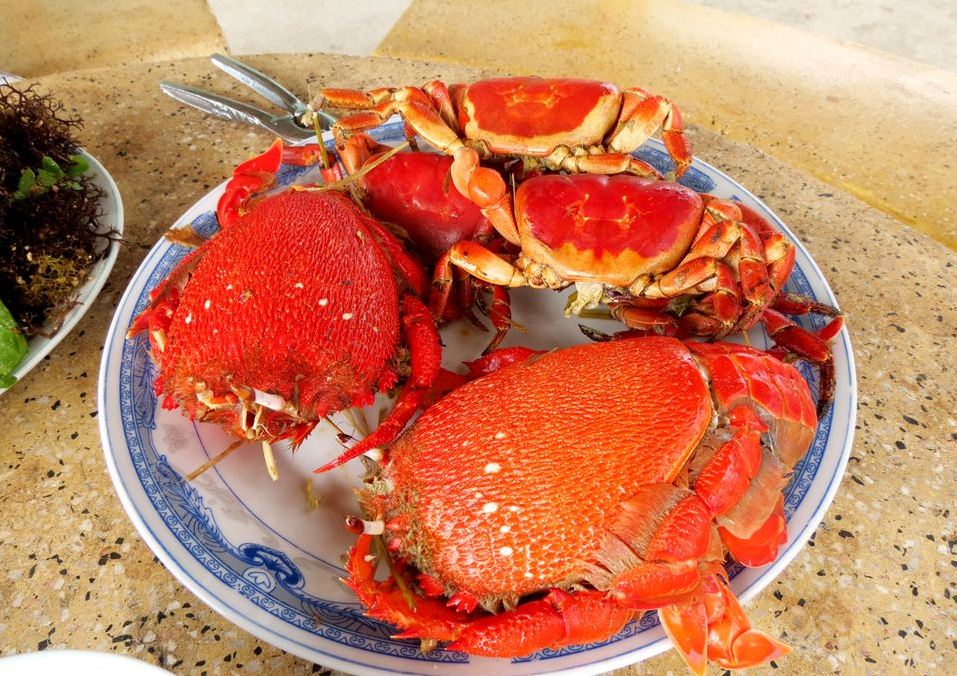 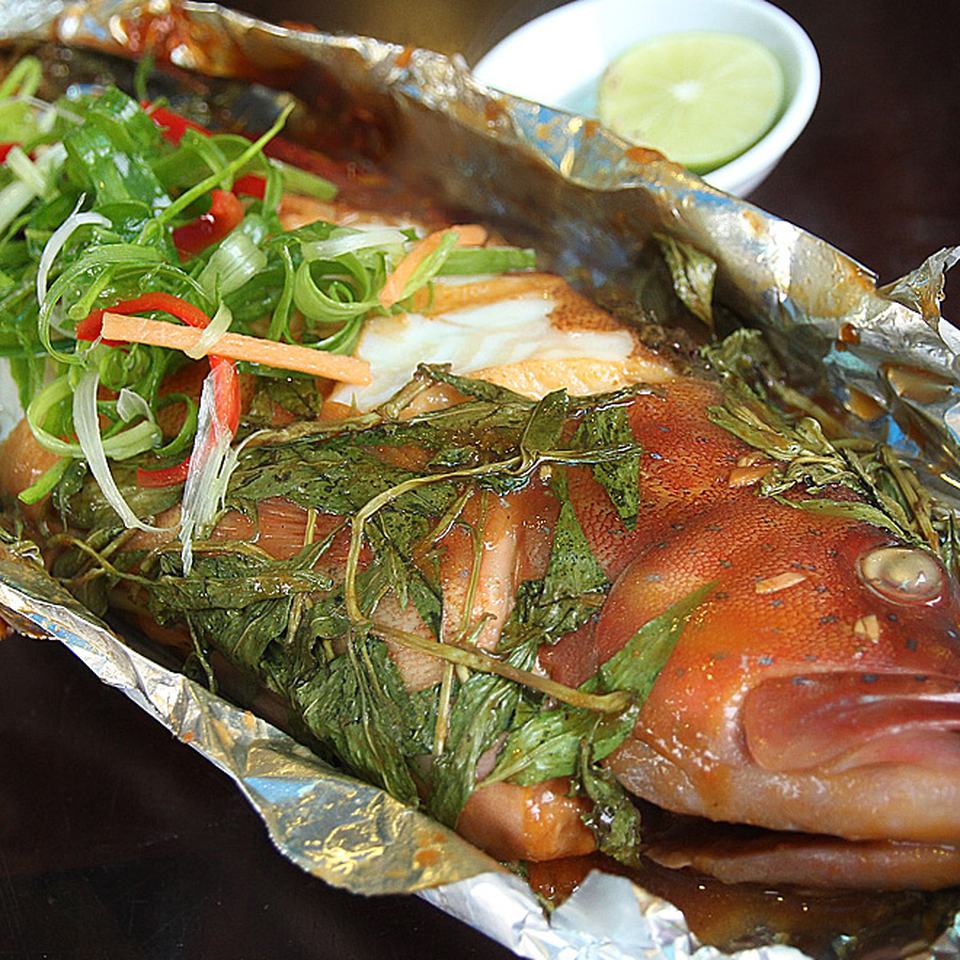 Following Mr. Vi, we pass by beautiful seaside roads. The Hon Tranh islet, which is settled by naval forces to protect the island’s outpost, is very striking. Hon Tranh is also set with radar devices with a range of 500 sea miles to the Pacific Ocean. While we are listening to his enchanting stories, he suddenly stops the car. Then, he takes us to climb over a high cliff. The wind blows more strongly. When reaching the peak, I am petrified. The place where I am standing is a high peak near the abyss with screaming waves surfing to the cliffs. The sea water changes colors, from the blue to emerald then to sapphire and the deep blue at the horizon. Then, the sea and the sky meet and hide the border of the Creator. 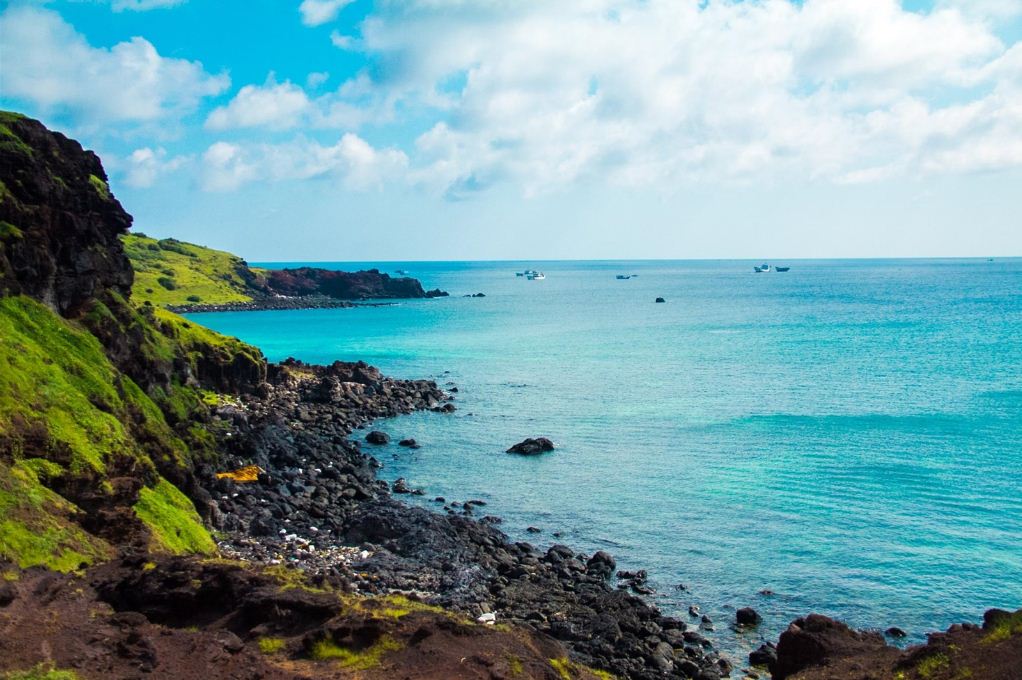 We had to lean against the cliff and close our eyes because the wind is so fierce. I feel as if I’m dissolving into the vast cosmos right now. The picture of ships sailing out to sea to extend their environment, as well as ancient people sacrificed for our peace, is vividly visible. 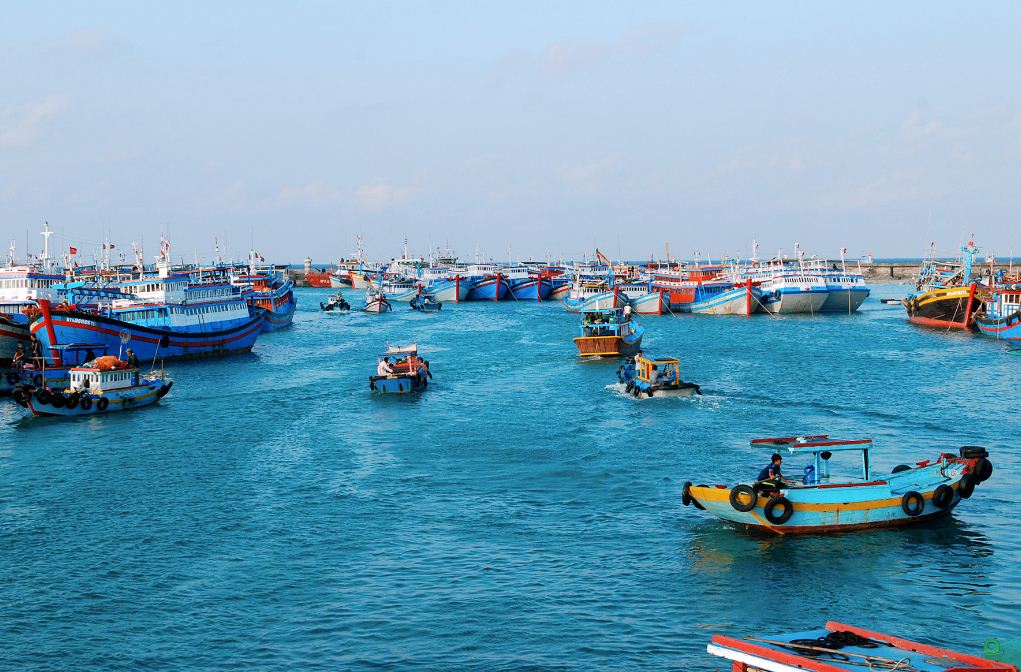 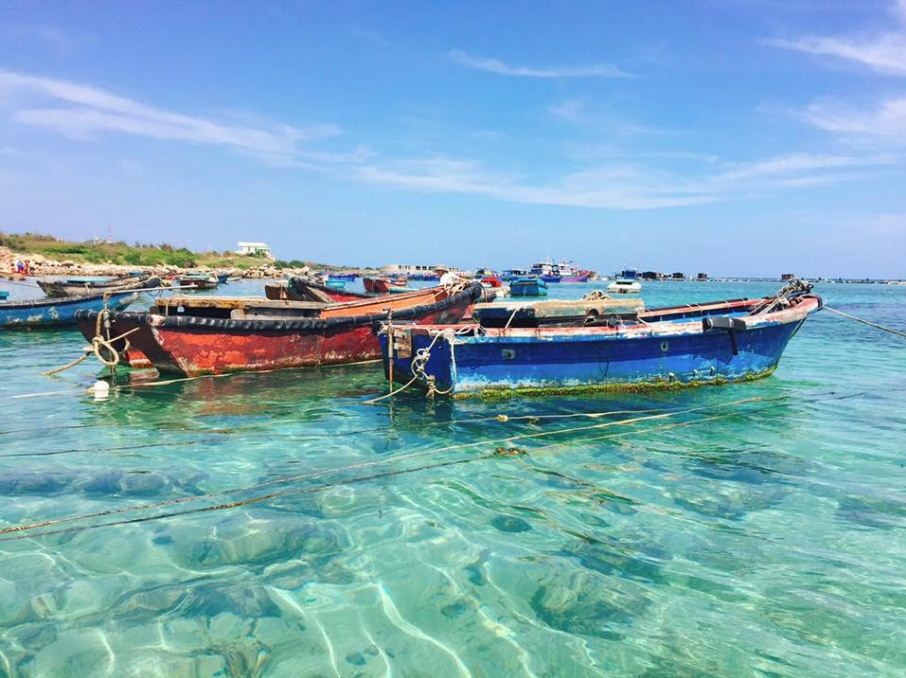 The entire area is sparkling in the sea. Boats full of fish come back after a hard day. At the wharf, wives and children are waiting for their husbands and fathers for their dinner. 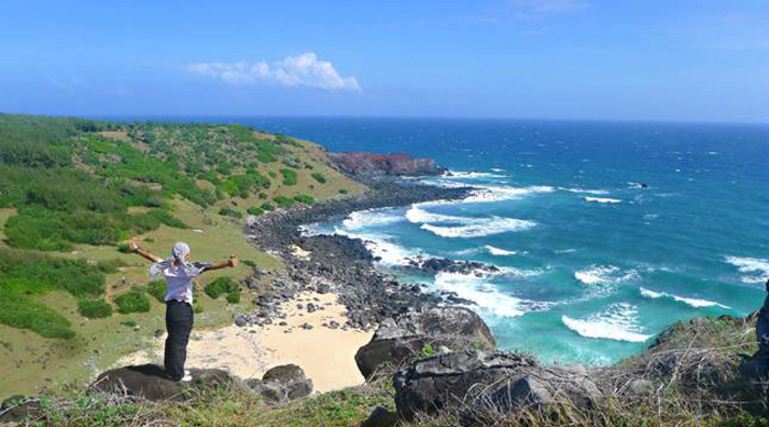 We will remain there till the sun sets in the horizon. The next stop is Cam Mountain, which has the finest sunsets. The sun sets slowly above the sea from the lighthouse, as the wind sweeps across the vast woodlands. The entire region glistens in the sea. After a long day of fishing, boats loaded with fish return. Wives and children are waiting for their husbands and dads for supper at the wharf. When the last rays of sunshine fade, dazzling stars emerge in the sky. Lamplight from little cottages on the island sparkles like though stars swooped down and floated on the ocean. 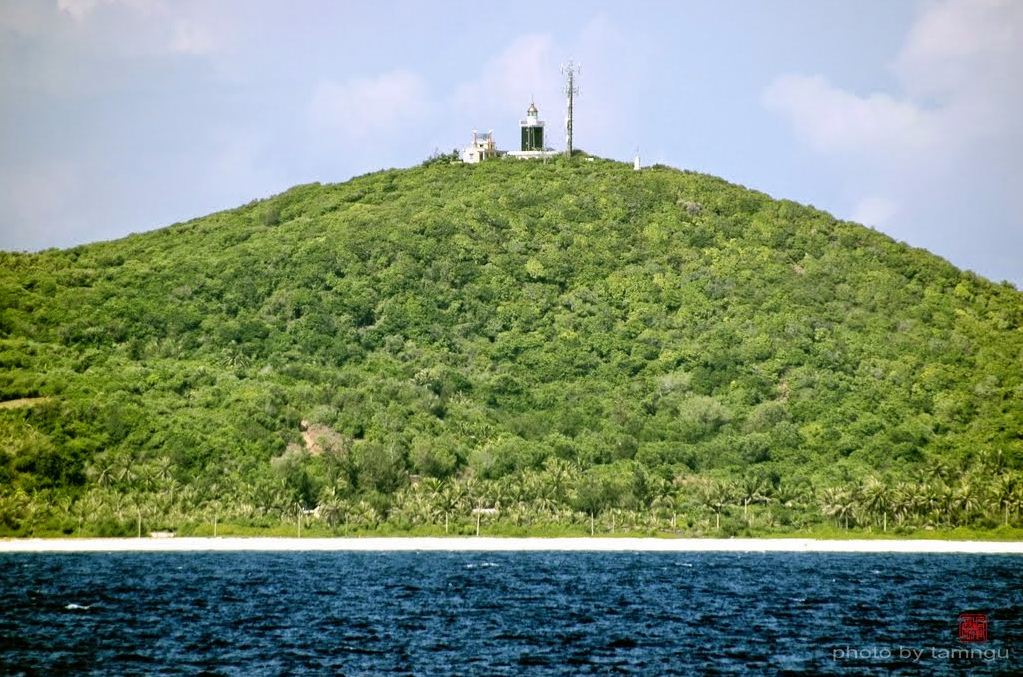 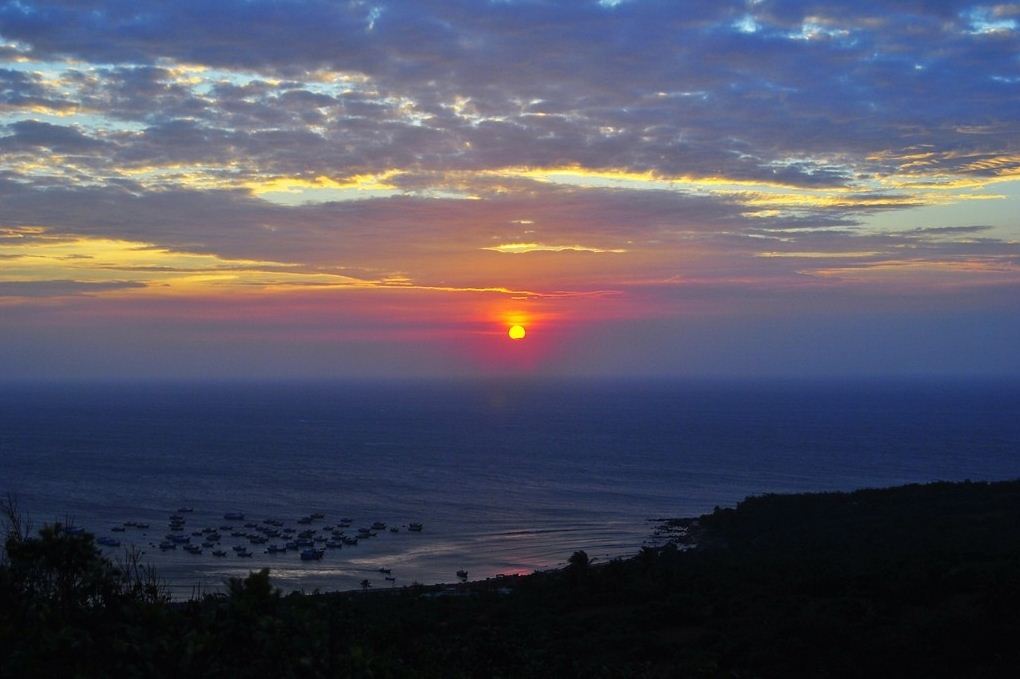 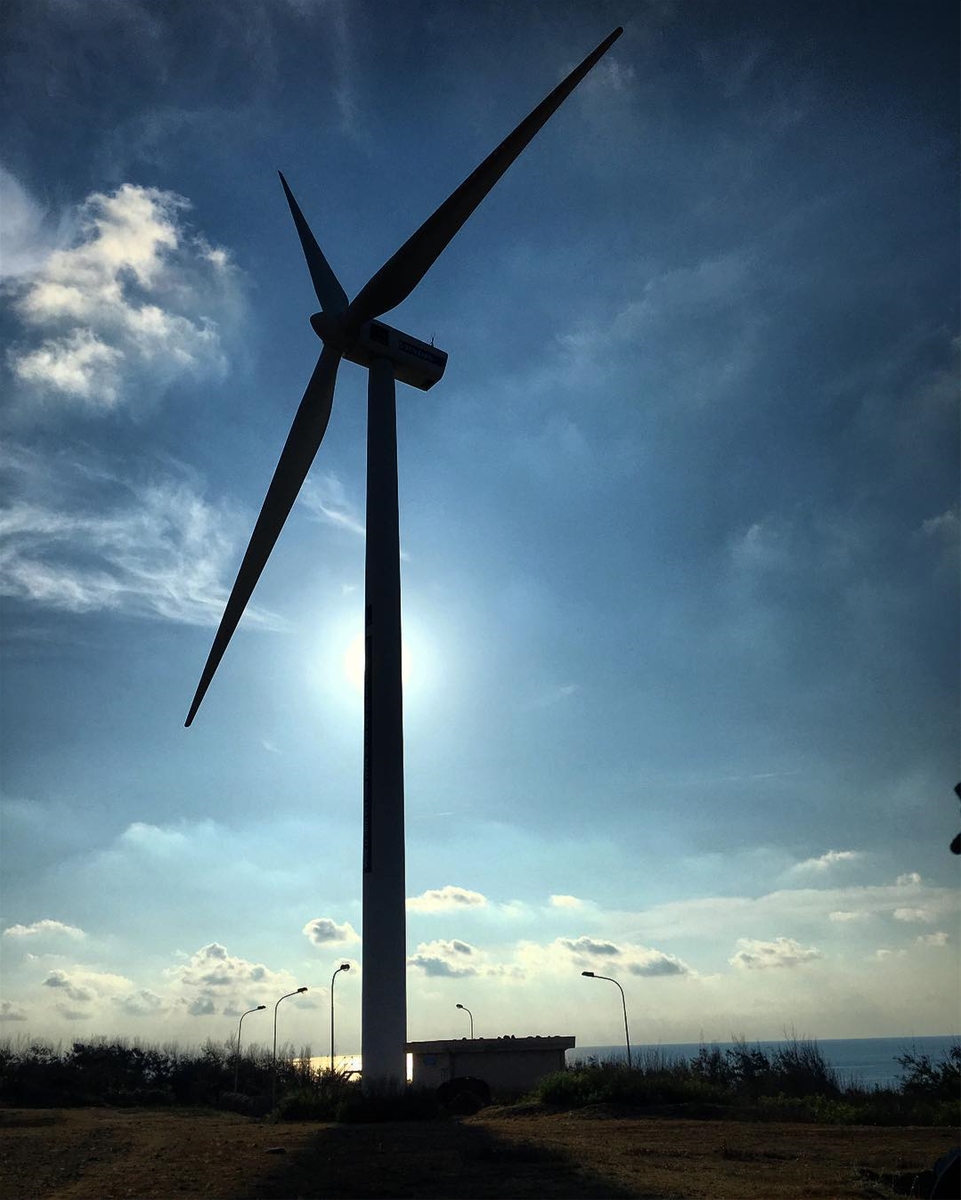 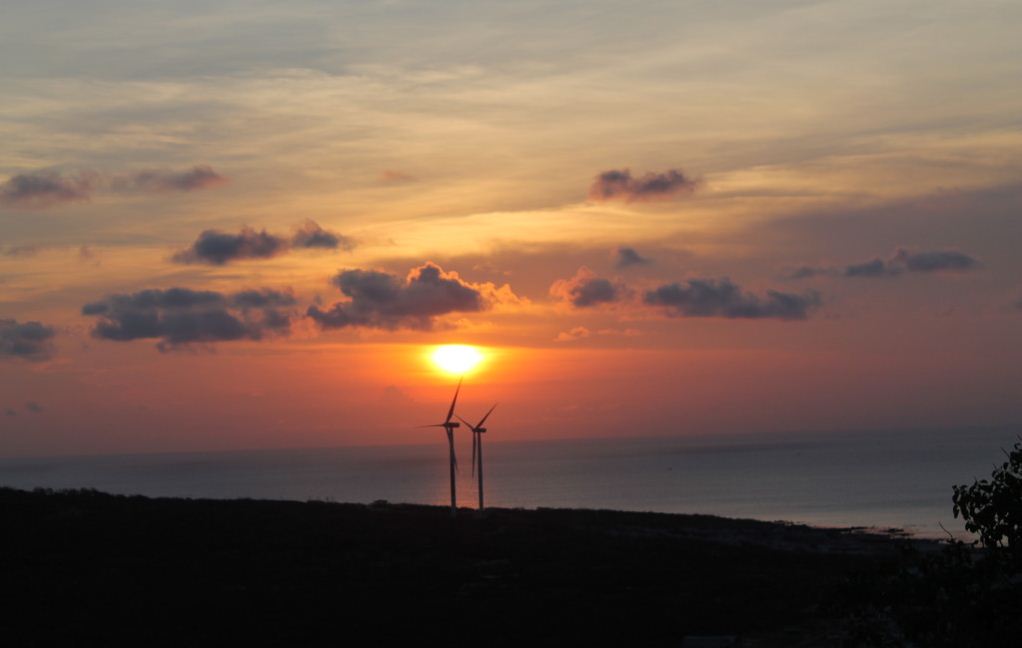 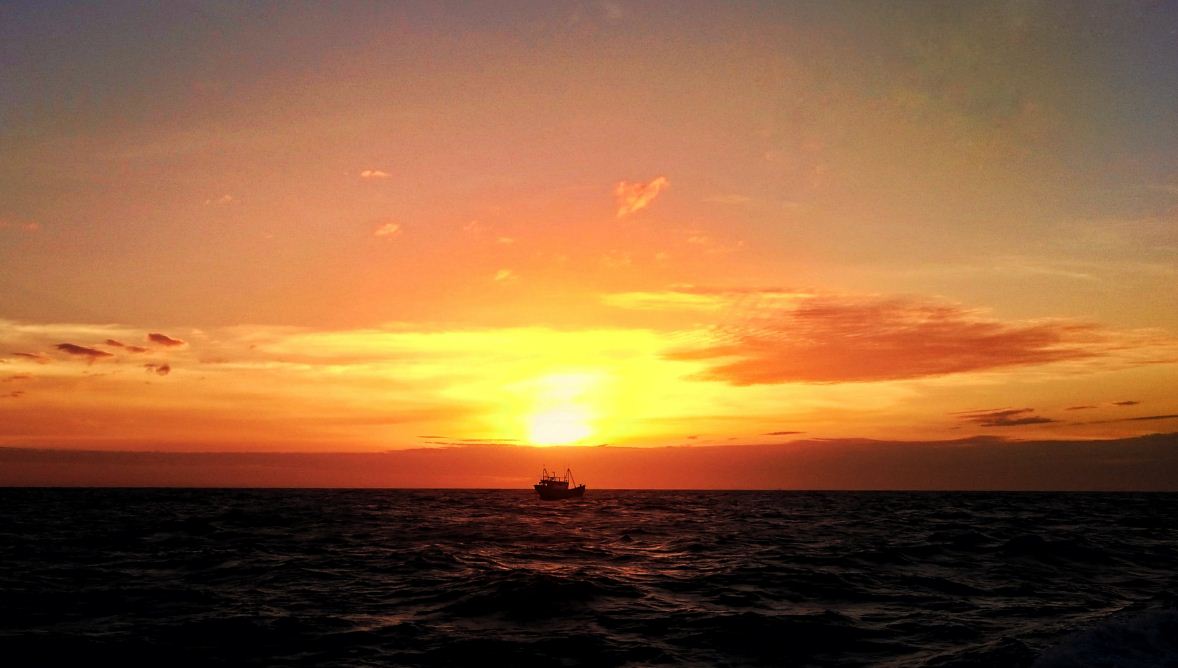 Only standing here in this moment, can you feel a deep longing for this landscape. Amidst the immense ocean, small people unyieldingly confront nature and make a great effort to have a prosperous life. More importantly, each of them is a brave soldier protecting their nation.

How to get to Phu Quy island 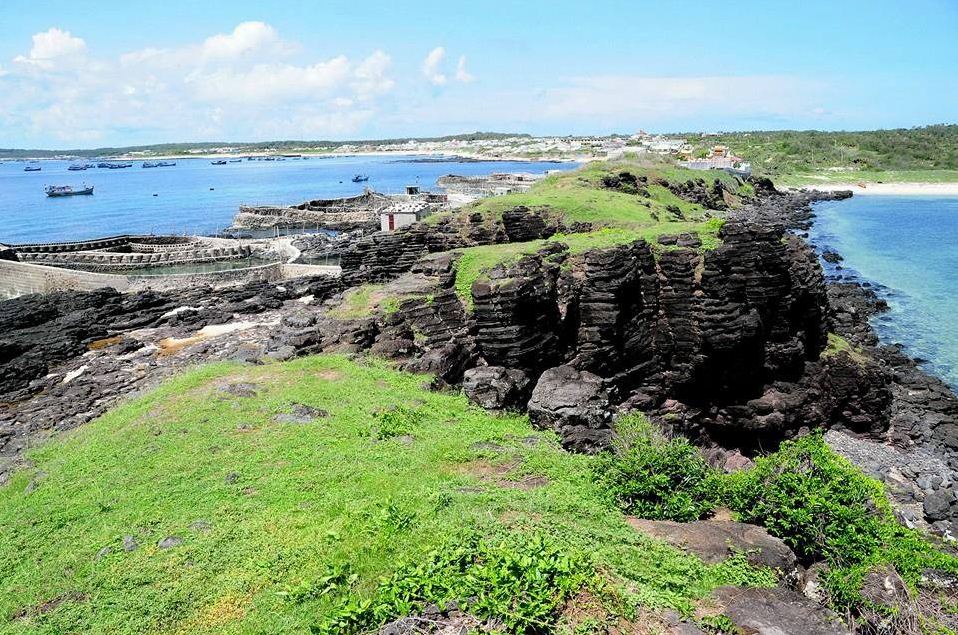 You can rent a guest house Phu Quy Island such as Long Vi guest house at Doi Thay cape (Mo Thay) at 062. 3509 509 – 0918680344 120. This guest house features the best view of the sea with spaces for many activities such as camping, burning campfire, walking and fishing. 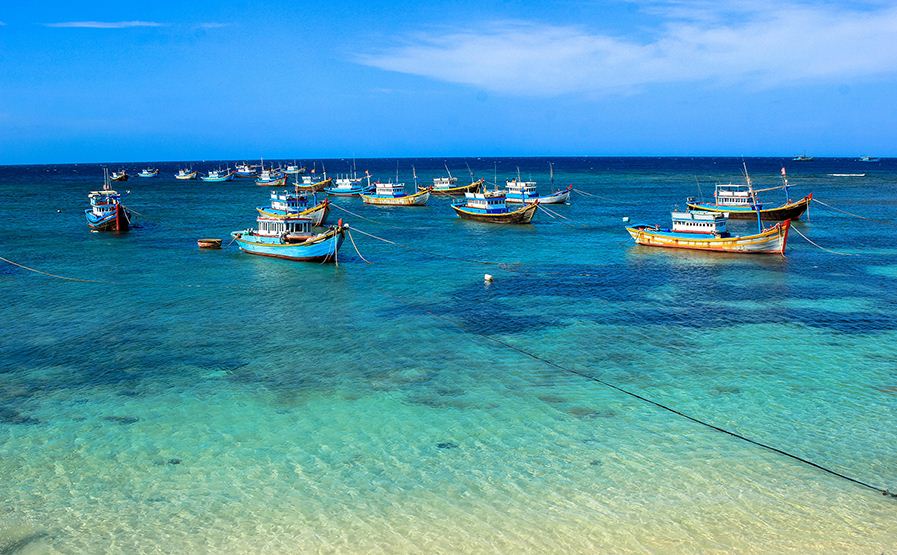 You can view the skeleton of whales at Van An Thanh, sunset at the lighthouse on Cam mountain, Linh Buu pagoda, Linh Quang pagoda, Thanh Lam, Lien Thanh, and Hai Hoa. Is Traveling with Face Masks Necessary in Vietnam?