Alexander III of Macedon (also known as Alexander the Great) established one of the world’s biggest empires, stretching from Greece through the Middle East, India, Egypt, and northeast Africa. Alexander, who succeeded his father, Philip II, as ruler of Greece and Macedonia (today’s northern Greece), conquered several empires and great kingdoms.

In modern-day Greece, several notable Alexander the Great landmarks, towns, and historical battles from his formative years may be found. As a former archaeologist who has always been interested in Alexander III and the influence he and his father had on history, no vacation to Greece would be complete without a journey along with Alexander the Great’s route.

Loading up our rental car with everything we’d need — plenty of hiking gear, good road maps (this was pre-smartphone era), a massive stack of Alexander the Great books, and a bottle or two of ouzo (the local Greek liquor) — my travel companion and I set out from Athens in search of Alexander and what made him “The Great.”

We traveled north from Athens to the ancient city of Thebes. In 335 BC, Alexander’s soldiers fought a ferocious fight in and around the city against the Thebans. The Macedonian soldiers eventually triumphed and destroyed ancient Thebes to the ground. This was the last strong Greek city-state to fall, and it was a crucial success for Alexander in gaining control of the Greek mainland. All that remains of ancient Thebes now is a scattering of shattered stones on the once-mighty acropolis.

The tides turned at Chaeronea

We made our way through the steep, olive tree-lined hills of central Greece, from the modern-day metropolis that has built up around ancient Thebes, in search of the famed historical battle site of Chaeronea. The wide, dry landscape serves as a reminder of how difficult it was to deploy an army through central Greece quickly and efficiently. We discovered the enormous stone lion commemorating the grave of the Sacred Theban Band after a few incorrect turns and a lot of “Do you believe this is the field where the fight took place?” The lone stone sentry guarded the tombs of legendary soldiers and was the location of one of the most important historic conflicts.

On a hot August morning in 338 BC, the united armies of Thebes and Athens clashed with the Macedonian army headed by Alexander III and his father, King Philip II. The troops of Alexander and Philip achieved a decisive victory. The Battle of Chaeronea signaled the end of the great Greek city states and the beginning of Philip II’s and subsequently his son, Alexander’s authority over Greece. The Sacred Theban band was considered the greatest fighting force, and Alexander buried the men under the enormous stone lion, which still remains today, to honor their skill in battle (even for the losing side). Less than three years later, Alexander the Great would finally conquer Thebes.

Our journey along Alexander’s road proceeded through the hilly area of central Greece to Mount Parnassus and the ancient ruins of Delphi, where the famed oracle declared Alexander unbeatable. This prediction came close to coming true; Alexander survived several near-fatal wounds before his death (probably from poison) in 323 BC.

Up close and personal with Philip II

We drove north from Delphi into Greece’s historic Macedonian area, through the fabled Mount Olympus, home of the Greek gods, and on to Aigai, the old Macedonian city (known today as Vergina). A huge burial mound with four graves, including the sealed burial mounds of Philip II and Alexander the Great’s son, Alexander IV, may be found here. The Argead dynasty was buried in Ancient Aigai, which was the ancient Macedonian capital before it was relocated to Pella. Archaeologists used a state-of-the-art subterranean museum to conserve the tombs inside the burial mound. Wandering amid the valuables Philip II planned to take to the afterlife, the sumptuous presents Alexander III buried with his son, and the massive interiors of the tombs filled us with amazement and astonishment. A gold barrel carrying Philip II’s ashes is located in the middle of this enormous mound burial site. Aigai’s history does not end there; it is the site of both Philip’s assassination and Alexander’s coronation as king, with vast, sweeping stone boulevards and mosaic floors still intact.

Where It All Began: Pella

We traveled from the location of Philip II’s death and Alexander’s reign to the birthplace of Alexander the Great, ancient Pella. Pella was the capital city of the Macedonian monarchy of Philip II and Alexander III. I could imagine what life would have been like for the young prince, and future ruler of empires, as he grew up and learned the art of strategy, governance, and philosophy — as well as the ambitions of a conquor — as I walked among the columned, stone boulevards of the ancient agora where merchants sold their goods, taking in the well-preserved palace walls and studying the beautiful mosaics that remain. 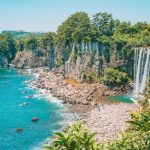 Sapa-The stunning scenery of the Northwest