Vietnam has become well-known for its stunning scenery, welcoming, friendly people, rich history, and fine cuisine, but it is less well-known as a trekking and walking destination. Nonetheless, trekking opportunities abound in mountainous areas of northern Vietnam near the borders with Laos and China. Cuc Phuong National Park, founded in 1962, is considered Vietnam’s oldest, with a total area of 25,000 hectares and 140 kilometers to the south of the capital Hanoi. Since it is home to a vast number of flora species and areas of primeval woodland with ancient trees with dense root clusters, ligneous creepers, and parasitic plants, this forest has exceptional botanical diversity. This national park straddles three provinces. Lam Dong, Dong Nai, and Binh Thuan were all in Vietnam’s south. This national park is well-preserved, with high biodiversity that includes a vast number of ancient trees that have lived for thousands of years. The river system and waterfalls are breathtaking. When it comes to geological features, the Central Highlands of Vietnam (also known in Vietnamese as Tay Nguyen (Tây Nguyên) is distinguished by an arid climate and rolling hills in comparison to the southern province. Hoang Lien National Park is about 15 kilometers from Sapa. Fansipan, Vietnam’s highest mountain at 3143 meters, is located in this region. This national park is home to over 2000 plant species in various stages of growth. It is regarded as an excellent location for trekking and ecotourism, as well as one of the most important forested areas in Vietnam’s northern province. There are many ethnic Hmong communities that live here. During the rainy season, keep an eye out for poor terrains, such as mud and landslides. Dong Van Karst Global Geopark is located in Ha Giang, Vietnam’s northernmost province, which shares a border with China to the north. It is at an average elevation of 1400 to 1600 meters above sea level, with limestone covering 80 percent of the region. Many 400 to 600-year-old fossils can also be found here. The annual temperature varies from 24 to 28°C, with a low of around 5°C in the winter. There are about 17 ethnic minority groups, and it is believed to be Vietnam’s first global geopark. It is a fascinating newly discovered trekking path in Vietnam.

Bai Tu Long National Park, situated in the northeastern region of Halong Bay, has many spectacular varieties of scenery on both land and sea. It is about 30 kilometers east of Halong Bay, so it seems to be the less popular tourist destination. This national park has 672 species of terrestrial plants, 178 species of aquatic flowers, 170 species of terrestrial animals, 132 species of invertebrates, and 119 species of fish spread over 61.25 km2 of land and 96.58 km2 of water. It’s surrounded by massive limestone cliffs. It is the smallest national park located about 70km west of the capital Hanoi. There is a mountain, about 1200 meters above sea level, considering as the major point of the national park. Trekking lovers can reach this mountain on foot or by motorbikes (the distance is about 12km). On the weekends, this is a frequent destination for Hanoi residents to visit. Transportation Guide: Getting Around in Da Nang 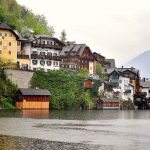