Spain has over 1,000 miles of Mediterranean coastline, a mix of ancient port cities, and resort towns that attract European aristocracy. True beauty, however, is not limited to seaside landscapes—the food of San Sebastián, the art of Málaga, and the marbled walkways of Alicante make these some of the most beautiful places in the country.

Palma is the gateway to and capital of Mallorca, Spain’s largest Balearic Island. Aside from being the starting point for exploring the island’s many golden and white-sand beaches, the city itself has a beauty derived from its history: Because of its strategic location, it has been conquered by nearly everyone who has passed through at some point. So, after you’ve had your fill of sand and surf, you can immerse yourself in history by getting lost in the Old Town, a Moorish fortress of winding alleyways and immaculate courtyards.

Málaga is more than just a place to land before embarking on an Andalusian road trip. The city, which was once home to Pablo Picasso, is a cultural hotspot, and we’re not just talking about the museum dedicated to the legendary artist. To begin, check out what’s on at the Cervantes Theater, a must-see for national flamenco stars and global ballet legends alike. But it’s not just about what’s going on in the city center. The city’s beach, La Malagueta, is ideal for a refreshing mid-afternoon dip, a leisurely stroll, or a delicious meal at one of the many chiringuitos, beachfront restaurants where the seafood is grilled right in front of you on glowing hot coals.

Nothing beats sitting on La Barceloneta beach at dusk with an aperitivo in hand after a day of exploring the streets of Catalonia’s capital. You’ve been blown away by Antoni Gaud’s cathedral masterpiece, La Sagrada Familia, and eaten your fill of freshly shucked oysters at the city’s food market La Boqueria, and meandered through the mazes of El Born, and now it’s time for some R&R with a breathtaking view of the Balearic Sea.

There’s a lot to do in San Sebastián’s Parte Vieja (the Old Town), you could spend an entire day surfing (or napping) at the happening beach Playa de Gros, or you could shop your way through the rea Romántica. No one would blame you if you spent your entire visit eating, because the food is as stunning as the city’s architecture and ocean views. While it may appear that you can’t turn a corner without coming across one of the world’s best restaurants, the city is also famous for its pintxos, the Basque version of tapas. Find a seat in one of Old Town’s more casual eateries, and we wouldn’t blame you if you Instagram your meal.

Yes, Ibiza is a popular destination for ravers and full-moon partygoers. But there’s a lot more to Ibiza’s island and town than thumping electro music and hordes of inebriated, sunburned tourists. If you dig a little deeper, you’ll discover a place rich in history and breathtaking in beauty. To begin, climb to the top of Dalt Vila, a UNESCO World Heritage Site, where you can enjoy panoramic views of the Mediterranean from 16th-century battlements.

Cádiz’s geography is what makes it so distinct—and beautiful. The oldest continuously inhabited city in Spain, it sits on a small strip of land in the southwest, almost entirely surrounded by the Atlantic Ocean, and it embraces the sea perhaps more than any other coastal town in the country. Lighthouses and lookout towers dot the cityscape, and the city is built around its port, which has served as a lifeline for gaditanos (locals) for thousands of years.

Alicante, more than any other place on this list, is an ideal destination for those who want all the trappings of a beach vacation without the hassles of more DIY itineraries. A well-developed tourism infrastructure makes this coastal town on Spain’s southeastern Costa Blanca ideal for both families and bachelorette parties. However, the fact that the beach town is dotted with tourist-friendly resorts and restaurants does not detract from its beauty. Do you require proof? Take a stroll down La Explanada de Espaa, a palm-lined promenade made of 6.5 million marble tiles that runs parallel to the port.Getty

Valencia is Spain’s third-largest city, often overshadowed by Madrid and Barcelona. But take a walk and you’ll realize that the city is a work of art in and of itself. When the Turia River flooded the city, officials responded by diverting the river’s flow and transforming the remaining riverbank into a massive, winding green space that allows residents to traverse the city without ever getting in a car. When you reach the City of Arts and Sciences, a glass hemisphere that rises out of the ground like something out of an Isaac Asimov novel, you know you’ve arrived at the park’s eastern end.

Marbella, on the Costa del Sol in Andalusia, is (in)famous for mega-yachts, supercars, and as a summer hangout for Europe’s aristocracy. However, if you venture just a little bit outside of the main tourist strip, it transforms into a completely different town. The labyrinthine Old Town revolves around the central Plaza de los Naranjos, so named because of the orange trees that surround it. On the Avenida del Mar, stroll through a collection of Salvador Dal sculptures that are casually on display to the public, and then follow the seaside promenade all the way to the neighboring town of San Pedro de Alcántara. That is the real Marbella, not the glitz and glam that dominates the news.

Are you sick of Barcelona? (What’s the matter with you?) Sitges provides a welcome respite from the city’s never-ending bustle. Just 25 miles from Catalonia’s capital, the former center of Spain’s 1960s counter-culture retains much of its artsy past—it hosts a variety of film and music festivals and one of Europe’s wildest Carnival celebrations—but it’s also a place where you can sleep in, go for a long swim, or simply sit back, people watch, and sip on an ice-cold caa. 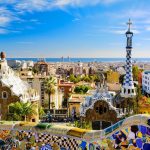 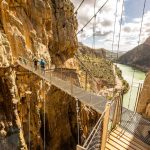