The Space of Gong Culture in Central Highlands

Nowadays, the space of gong culture is found in Central Highlands of Vietnam including 5 provinces of Kon Tum, Gia Lai, Dak Lak, Dak Nong and Lam Dong and playing an important role in spiritual life of ethnic minorities of Ba Na, M’Nong, Xo Dang, Co Ho, Ro Man, E De and Gia Rai, etc. For these ethnic groups, the gong performance is a part connecting closely to their community cultural rituals and ceremonies. Based on ethnic people’s belief, ceremonial musical instruments and its sound are considered as a means of communication with gods and deities.
The materials to make the gongs are brass alloy or a mixture of gold, silver, bronze and brass. The diameter ranges from 20cm to 60cm or from 90cm to 120 cm. A set of gongs considered perfectly has 2 to 12 or 13 units and even to 18 or 20 units in particular places.

As for Ma and M’Nong people, gongs can be played by both men and women. However, most of ethnic minorities like Gia Rai, Ede Kpah, Ba Na, Xo Dang, Brau, Co Ho, etc. it is only played by males. On the other hand, only female of few ethnic groups like E De Bih can take responsible for gong performances.
Most of ethnic people in Central Highlands believe that gongs are musical instruments having sacred power and every gong is represented for a god whose power is stronger when the gong gets older. These gods are assumed as the tutelary deity for life of each community who will be closely tied with every event of a person such as inauguration of new houses, funerals, buffalo sacrifice, crop praying rite, new harvest, ceremony to pray for people’s and cattle’s health, ceremony to see-off soldiers to the front, and the victory celebration.

Traditionally, gongs are played in the orchestra form. The orchestra has it’s a particularly natural sound-scale with 3, 5 or 6 sounds in common. However, a part from basic sounds, the gongs also have additional ones. In general, a 6-gong orchestra can perform less or more 12 different sounds which are solid and echoing. A gong orchestra needs to be performed in a wide space that creates the melody in different pitch, length and resonance.
Thank to the space of gong culture in Central Highlands, cultural identity of ethnic minorities in this region has been shown profoundly through each categories, sound-amplifying method, sound scale and gamut, tunes and performance art, etc. Besides, this heritage also presented for long-standing history through a thousand year of many communities. Because of these values, the space of gong culture in Central Highlands was recognized as an oral-transmitted masterpiece and intangible cultural heritage of the humanity by UNESCO in 2005. 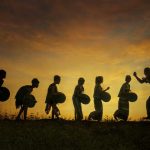 The Space of Gong Culture in Central Highlands 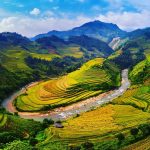