Som Rong pagoda in Soc Trang- as beautiful as Thailand

Soc Trang is a long-standing settlement land of three ethnic groups, namely Kinh, Khmer and Hoa. Therefore, the spiritual culture here is very developed, with more than 200 temples, of which 92 are Khmer. Most of these places have hundreds of years of history and are of great religious role to the whole community. If you have the opportunity to visit this place, you can take the time to visit Som Rong Soc Trang Pagoda to learn about culture as well as check in a beautiful set of photos. 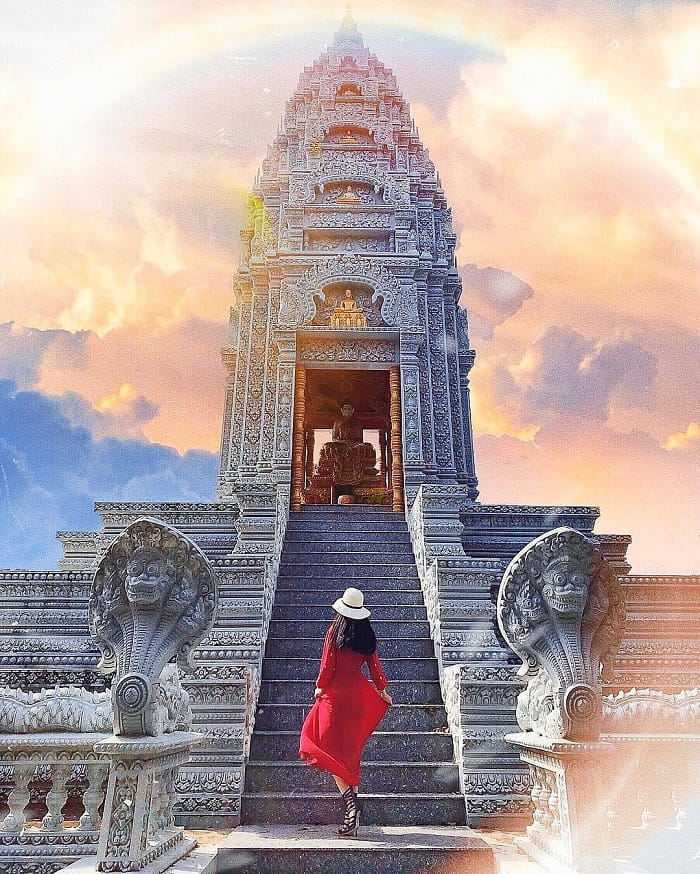 Initially, Som Rong pagoda was located at 367 Ton Duc Thang street, cluster 2, ward 5, Soc Trang city. The full name of the pagoda is Bôtum Vong Sa Som Rong (Wat Pătum Wongsa Som Rong), which is named after the species of som algae growing much on the old land, with flowers called bôtum. Up to now, the pagoda still has two ancient trees. With a history of over 600 years old, from a temple built only from bamboo, the simple wood has now been built with solid materials on land up to 5 hectares wide. Let’s find out with Focus Asia Travel ! 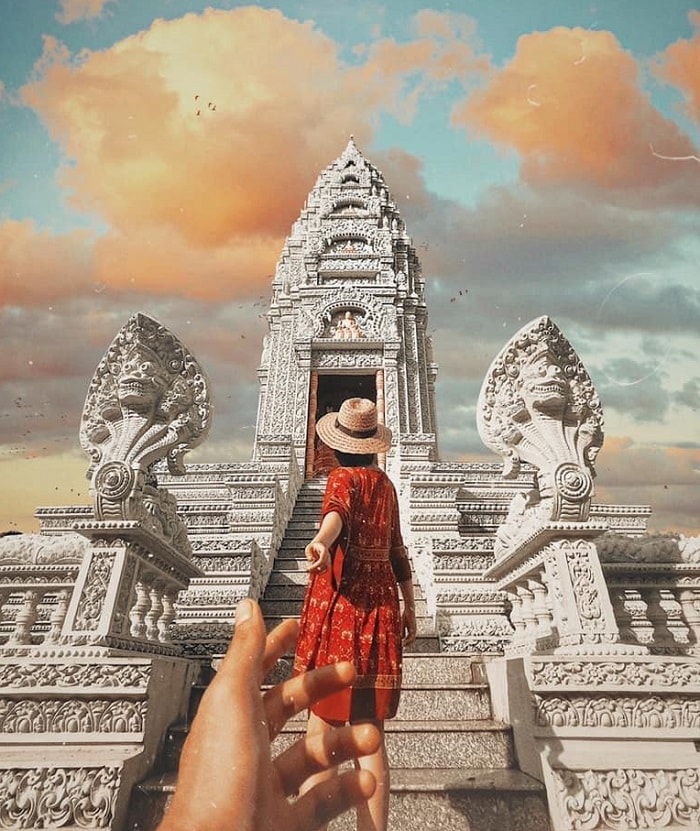 Som Rong pagoda has a history of more than 600 years

Som Rong pagoda gate is covered with emulsion gold, decorated with many images in Khmer culture such as Naga snake god, etc. The five towers on the gate are symbols of Mount Tu-di. The entrance to the pagoda is planted with many old star trees. 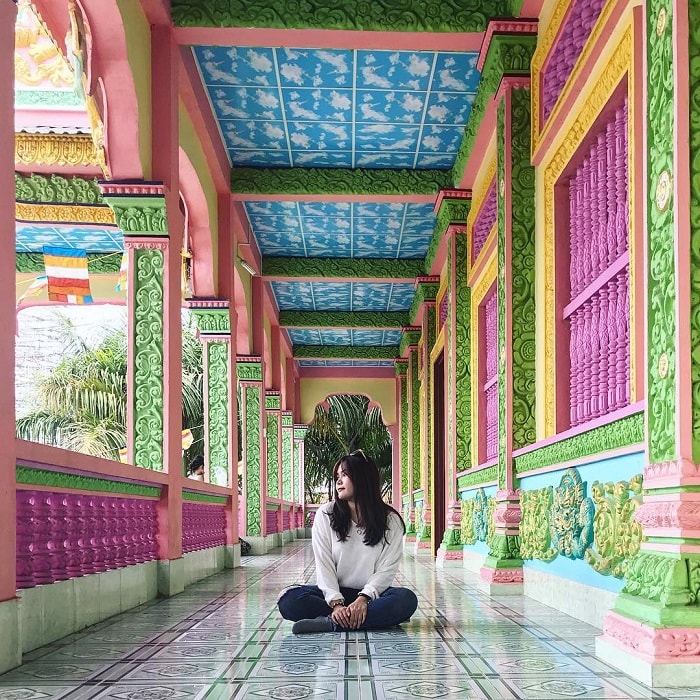 The main hall is the main place to worship Buddha and a place to celebrate the great altar of monks who are practicing at the temple. Six columns support the main hall. Three layers of overlapping roofs in the style of typical Khmer pagoda architecture. Each corner of the roof floor is decorated with a Dragon image. 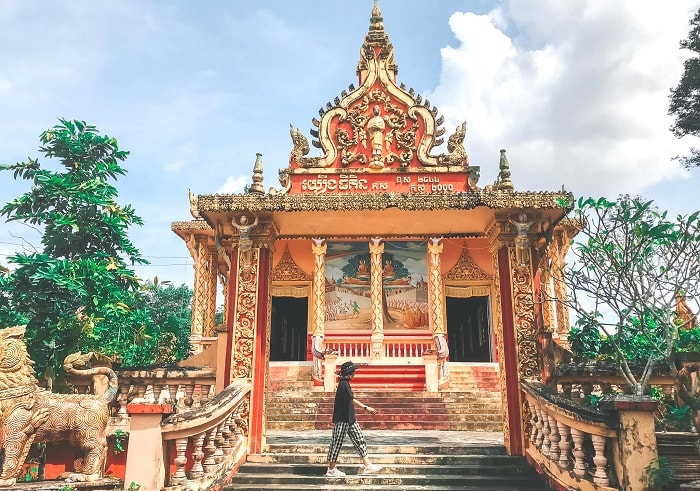 The exposed corner of the horizontal roof and vertical column embossed the image of the goddess Keynor supporting the roof. On the walls and ceiling of the main hall are frescoes depicting the life of Shakyamuni Buddha. The altar in the main shrine houses many statues of Buddha Shakyamuni including two statues carved in wood in a standing position from nearly 300 years ago.

The stupa is located right in the entrance to the pagoda, parallel to the main hall, built on an area of ​​100 m2, 25 m high and is the place to keep more than 400 jars of ashes of the monks, vows and temple abbot. Instead of the traditional yellow color, the gray painted tower looks majestic and ancient as carved from monolithic rock. Four-sided tower with four paths representing love, compassion, joy, discharge, carved many delicate Khmer patterns. The entrance to the stupa is a statue of Naga snake god.

Stupa of Som Rong pagoda – The most popular check-in point

This is also the very hot check-in point of Som Rong pagoda. The Stupa towered on a strangely beautiful image, radiating a mystical spiritual atmosphere. Many young people choose to check-in at sunset when the orange sunlight turns to a fanciful purple color coating each pattern. If you catch the moment when the pigeons flutter their wings on the top of the tower, you will get an image with a beautiful background that vibrates.

The sala house is the lecture hall and monkhood of Som Rong pagoda, inaugurated in 2017 with an area of ​​more than 1 ha and a total budget of nearly 16 billion. The sala house is a specialized place to receive guests, organize offerings and great traditional ceremonies. It is an indispensable part of the architectural complex of traditional Khmer temples.

In the Khmer religious buildings, it is very common to see the image of M’ko releasing animals, especially releasing dragons. In Khmer culture, this image is a symbol of prosperity. Som Rong temple library is the old sala. Currently, more than 1500 books are kept to serve the learning needs of monks, students, Buddhists and local people. 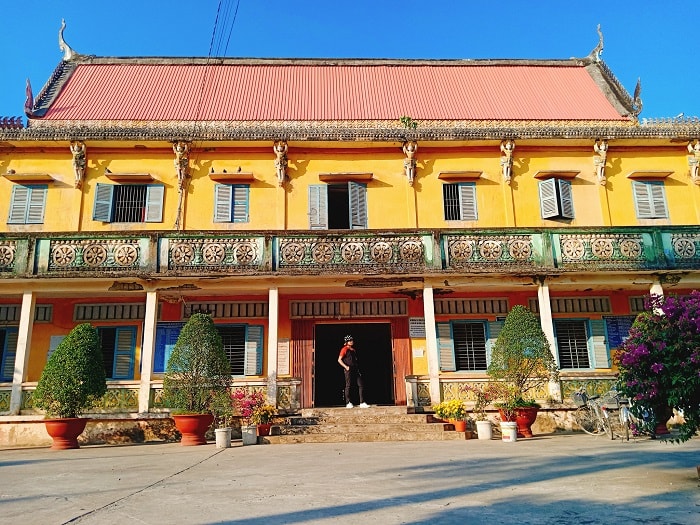 The multi-purpose house of Som Rong pagoda is both a canteen and a guest house for Buddhists from all over the world. In each Oóc Om Boc festival season, many teams participating in the ngo boat racing festival – a sport of the Southern river region – also stay here. 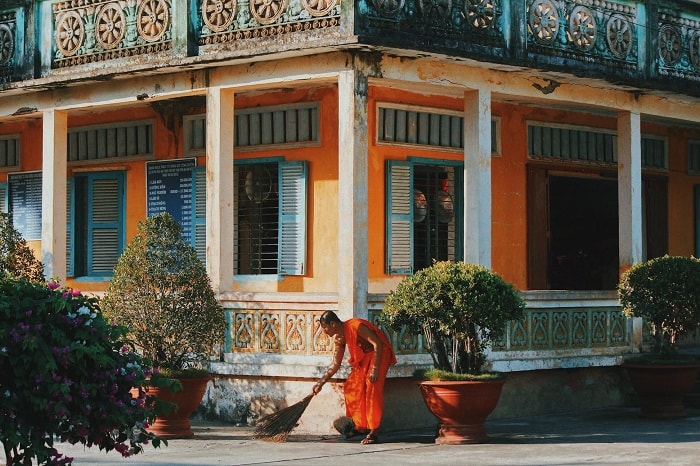 Som Rong pagoda is home to the largest giant reclining Buddha statue in Vietnam that was just inaugurated in 2020, with a length of 63m, a height of 22.5m and a weight of 490 tons. From a distance, visitors can see the majestic statue of the Buddha Shakyamuni Buddha. This is the highlight, creating a harmonious beauty in the overall architecture of the temple. 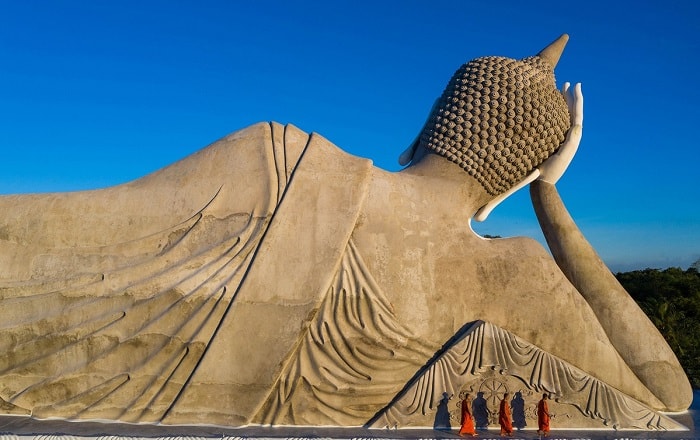 Som Rong Soc Trang Pagoda is a solemn place, so you should choose beautiful clothes that are still polite and discreet. In the temple grounds, there are many animal statues such as elephants, snakes, etc. If you go with the children, please remind them not to climb because these are sacred symbols of the Khmer people. Som Rong pagoda in Soc Trang- as beautiful as Thailand