Phat Diem Cathedral is a Vietnamese architectural marvel that spans over two hectares (five acres) and includes a bay, a grand Cathedral with five different side chapels, three artificial grottoes, and a magnificent bell tower known as Phuong Dinh. The unusual architectural style of this Catholic Church, which resembles a Buddhist temple or pagoda and is distinguished by many layers of overhanging curved roofs, is of particular interest to visitors.

Father Tran Luc, also known as Father Six, the then parish priest of Phat Diem, oversaw the construction of Phat Diem Cathedral, which took twenty-four years to complete (1875-1899). Phat Diem began as a simple parish before becoming the seat of the newly formed diocese in 1901. Without a question, if Phat Diem cathedral had been founded by a European missionary, it would have looked similar to the other Catholic churches of the period. Instead, it has been one of the most historically significant churches ever designed in Asia in Far-Eastern architecture. When the tourist arrives in the courtyard, he or she cannot help but be impressed by the Cathedral. The stone façade of the Cathedral is elegant, in comparison to the colossal Bell Tower. On the right, a memorial stela carries a Latin hymn in honor of Mary, as well as the dedication of the Cathedral of Our Lady of Holy Rosary, signed by Father Six A.D.1891. On the central tower, we see two Angels bearing the cross, two others blowing trumpets, and four characters that signify “foreboding of Judgement Day.” The towers are constructed of bricks. Stone is used to build the five porches. The central porch is a huge slab cut into an intricate rose bush scattering its twigs, with seventeen Angels among them. Above the porches are fifteen stone reliefs depicting episodes from Jesus’ and Mary’s lives, as well as the fifteen mysteries of the Rosary. Five stone entrances, 9m deep (291/2 feet), lead to five wide carved wood doors.

Over each Angel carrying a holy water basin is a Latin sentence describing the proper attitudes a Christian should have while coming to pray. When one enters, one is struck by the interior’s dimness and quietness, as well as the good feeling of warmth emanating from the wood construction and decoration.

A famous statue of “Our Lady with Infant Jesus” can be found in the sanctuary. Saints are shown on both sides. Six Martyrs are depicted on the glass windows above, five of whom are Vietnamese and one is European. The top image depicts Our Lady giving St. Dominic the Rosary. The pictures and monument, which are mostly painted blue, suggest a large crucifix. Despite a hundred years and war destruction, the lacquered and gilded woodwork has held up remarkably well. 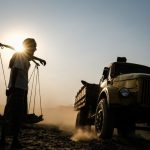