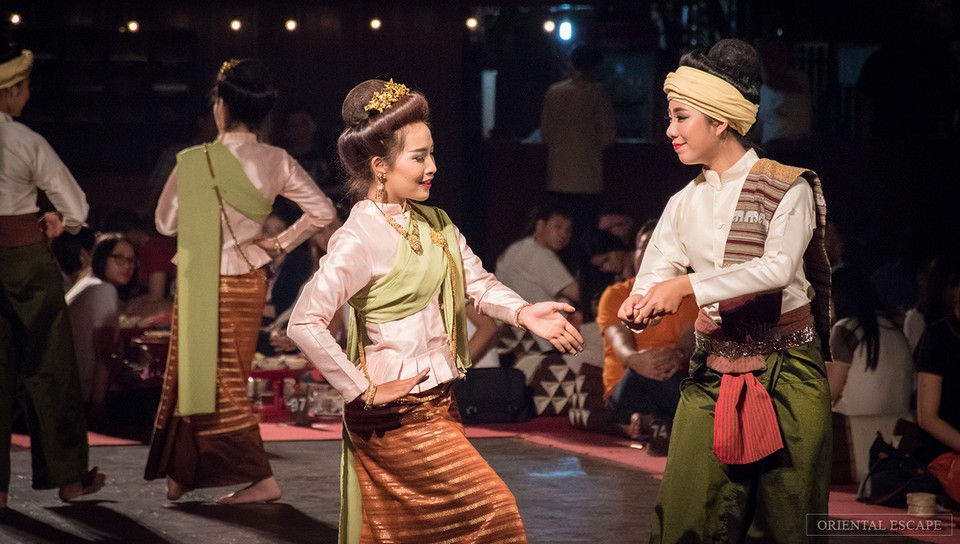 Before visiting Chiang Mai, I read a lot of documents and articles about this city that was once the capital of the Lanna Kingdom. Before that, I only knew Chiang Mai was the capital of Northern Thailand, as well as an important traffic gateway to other cities/famous destinations in the north such as Chiang Rai, Pai, Lampang, and so on. My intention at the time was only to visit Pai and the Golden Triangle, but I ended up staying in Chiang Mai for much longer than that. As a result, I was able to partake in Khantoke, a traditional royal dining ritual of the ancient kingdom of Lanna. 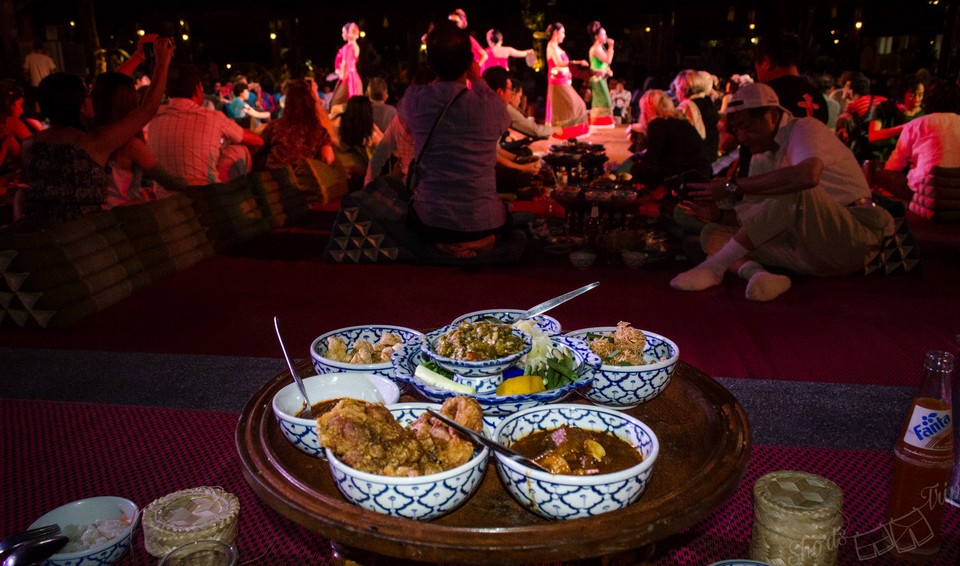 According to legend, this dinner was once served only to the royal family or wealthy and influential families on special occasions (weddings, housewives, celebrations, ordinations, etc.). Visitors from afar who wish to join Khantoke must be personally invited by the host and must be in a loving relationship. This meal is also served to welcome ambassadors from other kingdoms. 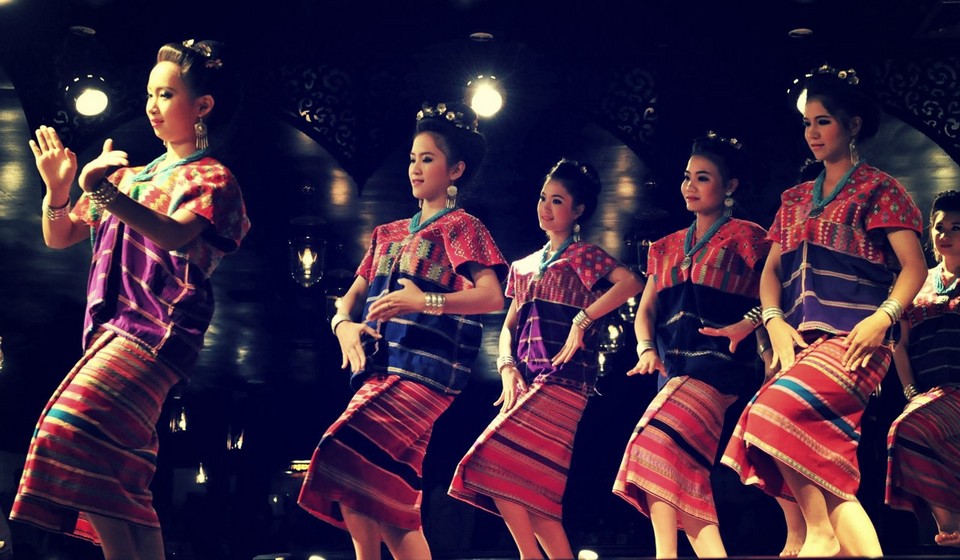 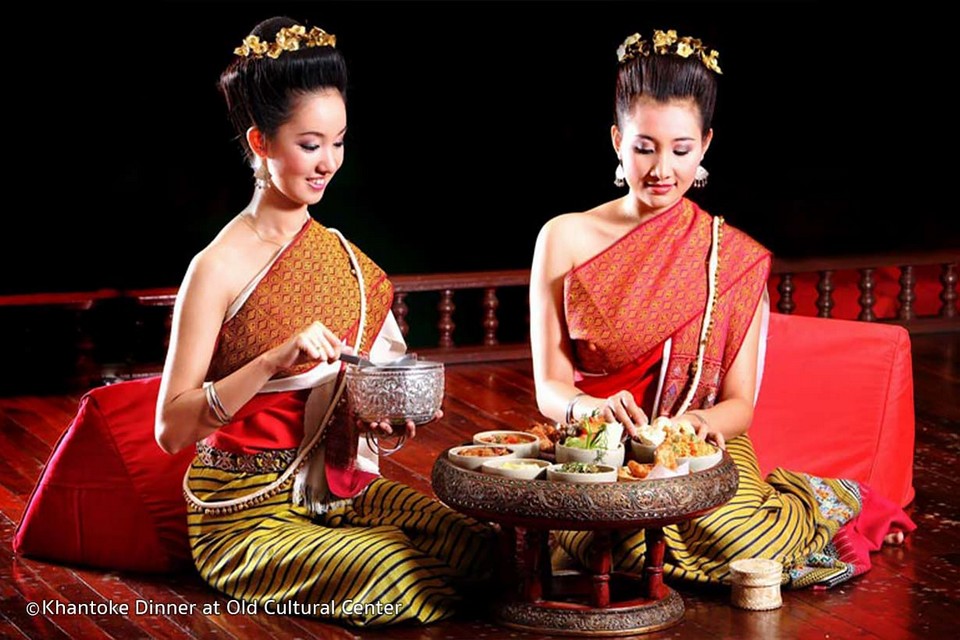 Why is it called the Khantoke?

Because Khantoke is essentially the name of a food tray made of wood or rattan that can hold 7-9 dishes and has an average diameter of 30 centimeters, it was commonly used during the time of the ancient Lanna kingdom. People eat Khantoke with their hands rather than chopsticks, and there are a variety of spoons available to scoop soup and broth. Coconut wood was used to make these spoons. The small trays that remain are made of wood, bamboo, or rattan. 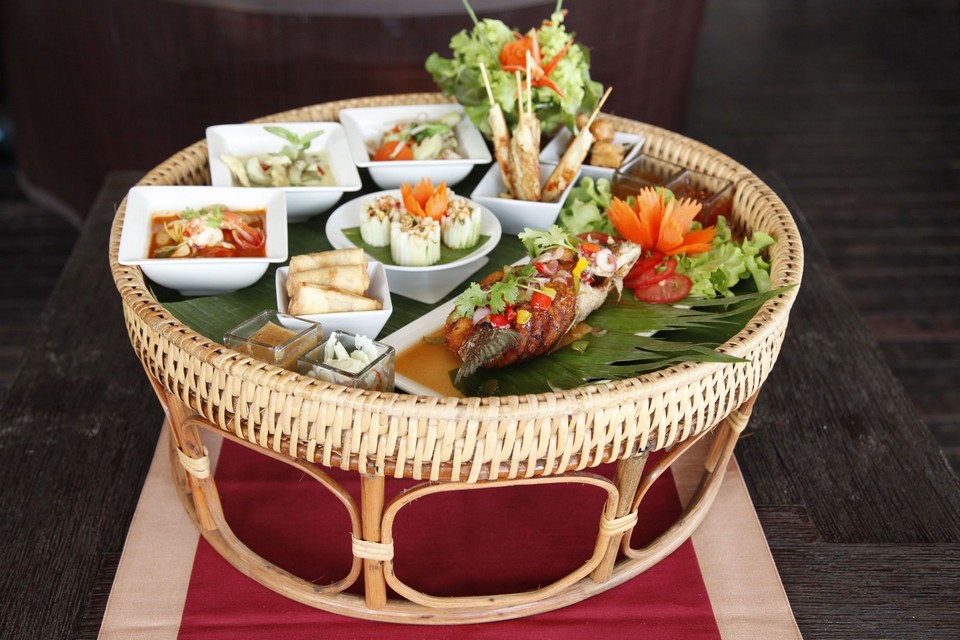 The best thing about Khantoke is the combination of delicious food and graceful dances (Khantoke dinner and cultural show) – the essence of this region’s culture. The show, which lasts about 2 hours, is a must-see if you have one last night in Chiang Mai. 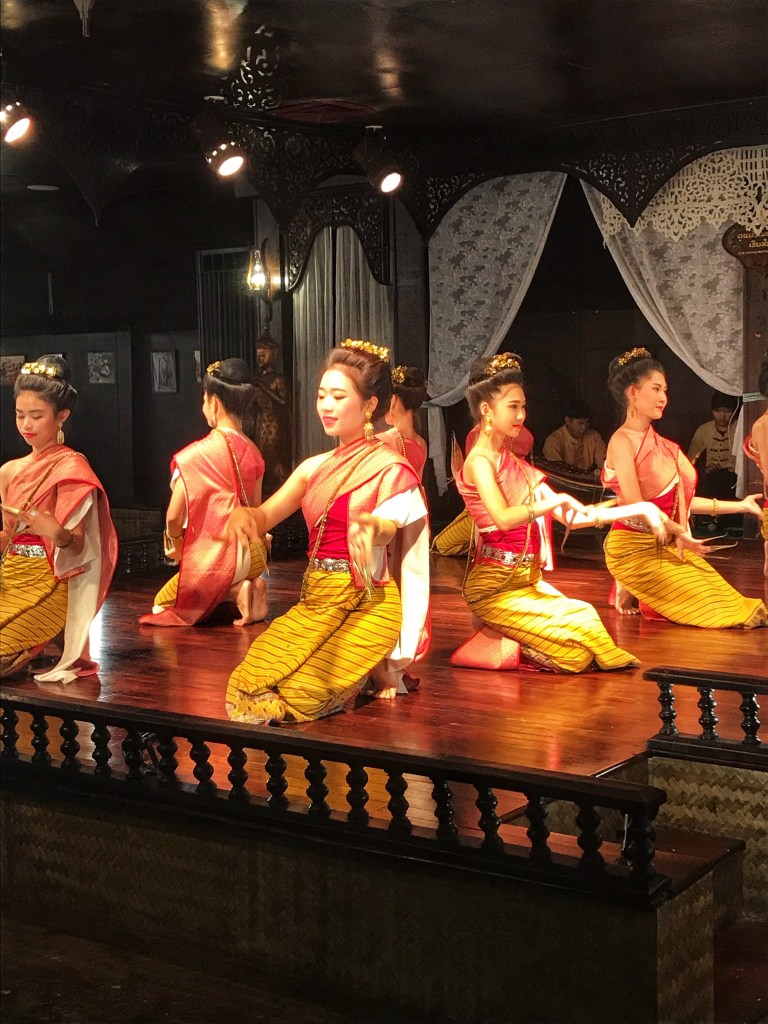 Khantoke is a formal, sequential meal. In which, the participants (diners) will gather around at the small tables below. While the opposite direction is a stage set up for diners to enjoy traditional art dances during their meal. It was a stage in the hall made of teak.

Royal court dances, beginning with the fingernails dance of extremely graceful and beautiful girls, were among the dances to be performed. The following are performances of sword dance, archery, and majestic drum dance by the hefty and handsome young men of Thailand’s north. Following that is the Magic Bird dance or the silk spinning dance, which depicts the daily life of this location. 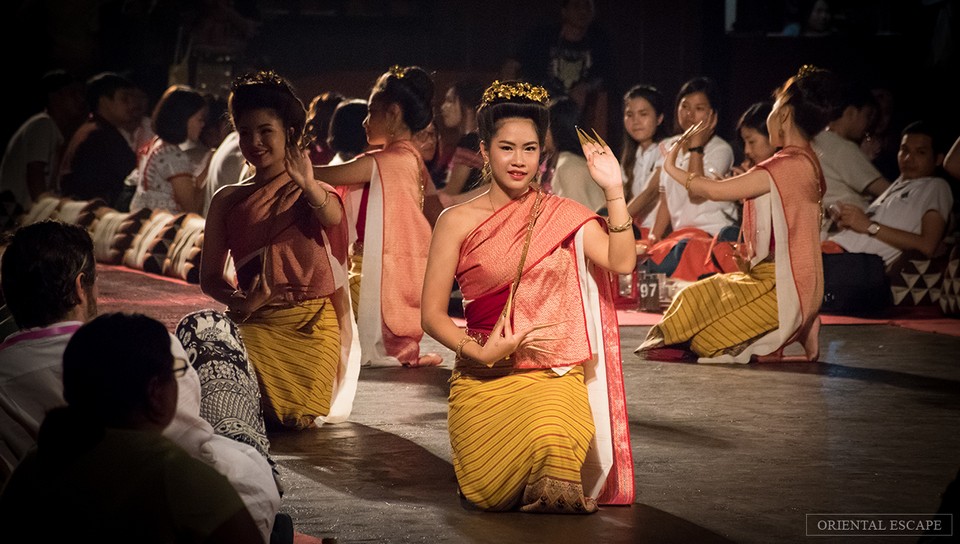 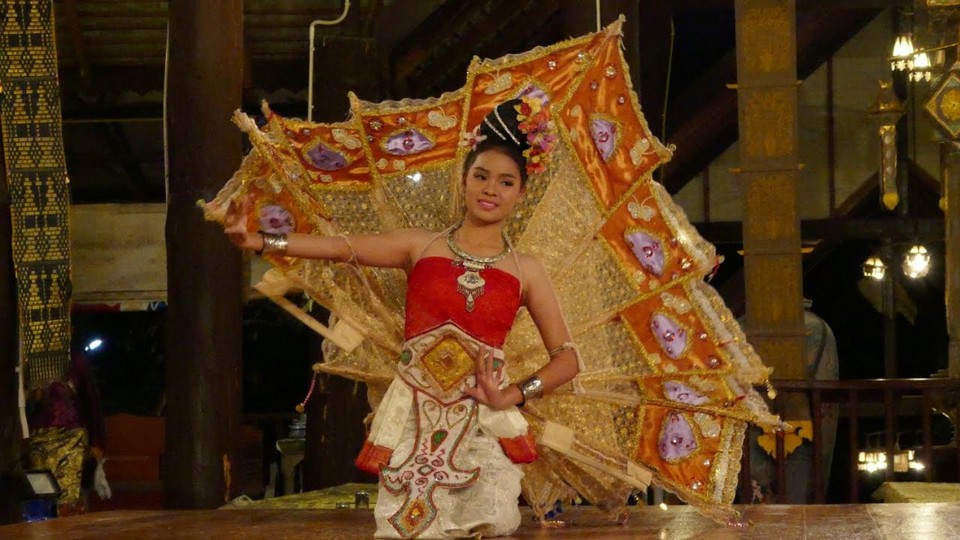 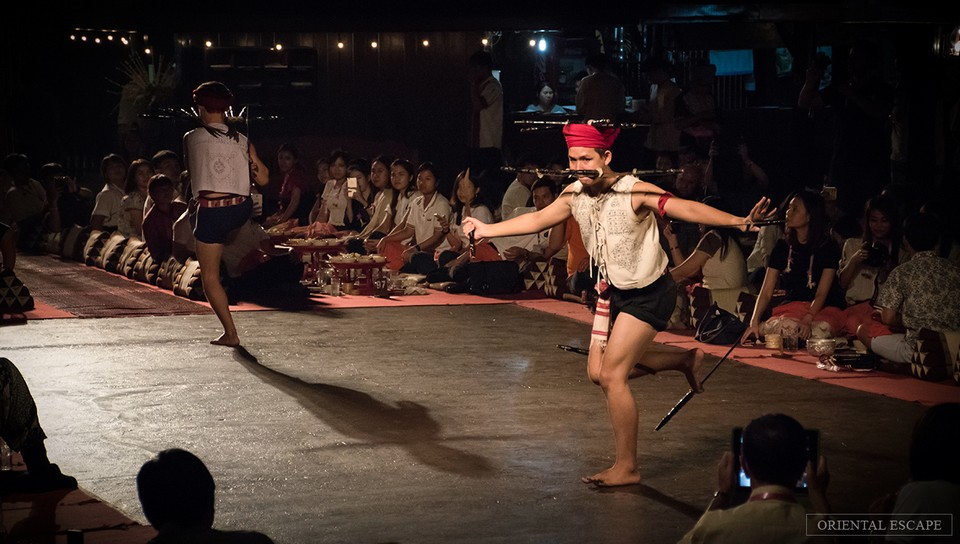 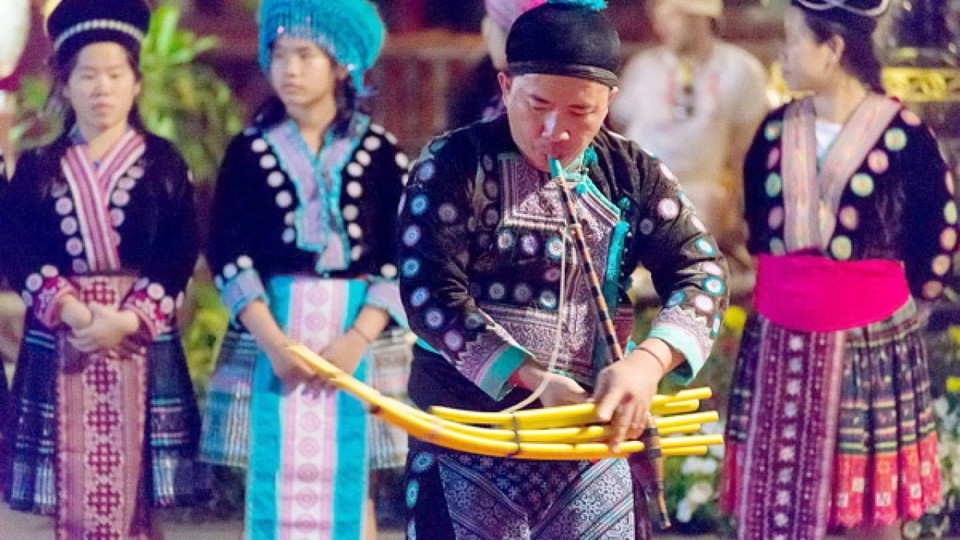 Visitors will also be able to admire the unique and exotic songs and dances of Northern Thai mountainous ethnic groups, the Shan people, and the Burmese, including the Mahn Mui Chiangta Dance, in the show. Unexpectedly, visitors sitting down to eat will be “led” to the stage by surprise to participate in the dances of Northern Thai girls. That is such a fun experience! (I, too, have had this experience.)

When it comes to Khantoke’s food, I must admit that it is not very tasty! However, don’t jump to conclusions. Because it does not appeal to the tastes of Vietnamese people like myself, not because it has been improperly processed. These are typical dishes that people in the mountainous regions of Northern Thailand used to eat, so they could be considered only regional characteristics. So, what exactly are those dishes? 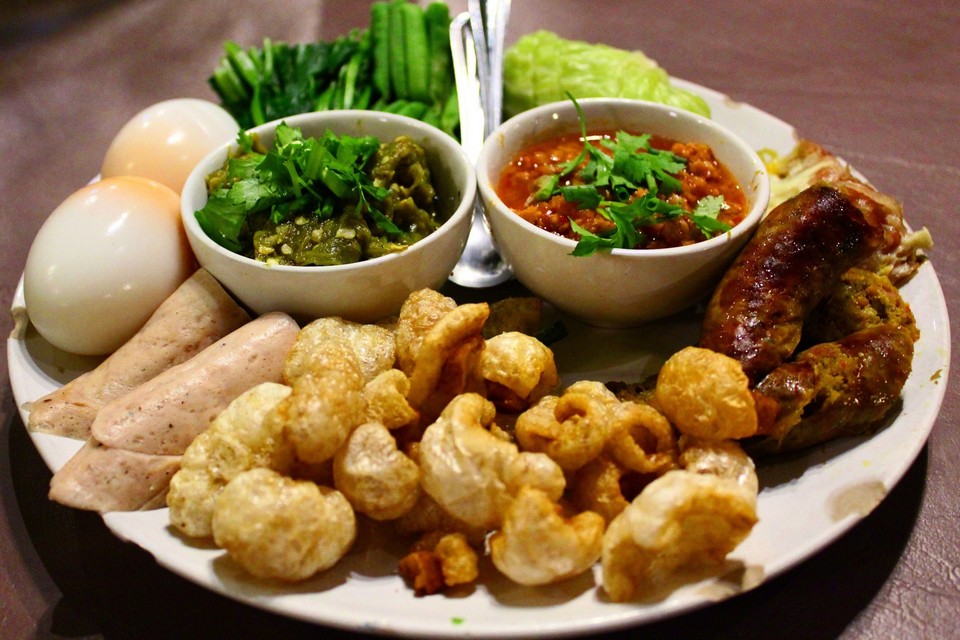 It’s a round tray of dishes with a sticky rice dish contained in a bamboo basket brought out. These are some fried dishes (fried chicken drumstick, fried pork, fried pork skin, soup), the rest are vegetables (pumpkin, cucumber, and some other vegetables), but we prefer steamed and raw vegetables. Each of them will be presented in a different plate in the correct order, and the color scheme is quite appealing and neat. Each diner will also receive a bottle of Chang beer to help them stay up one night “really like a Thai.” 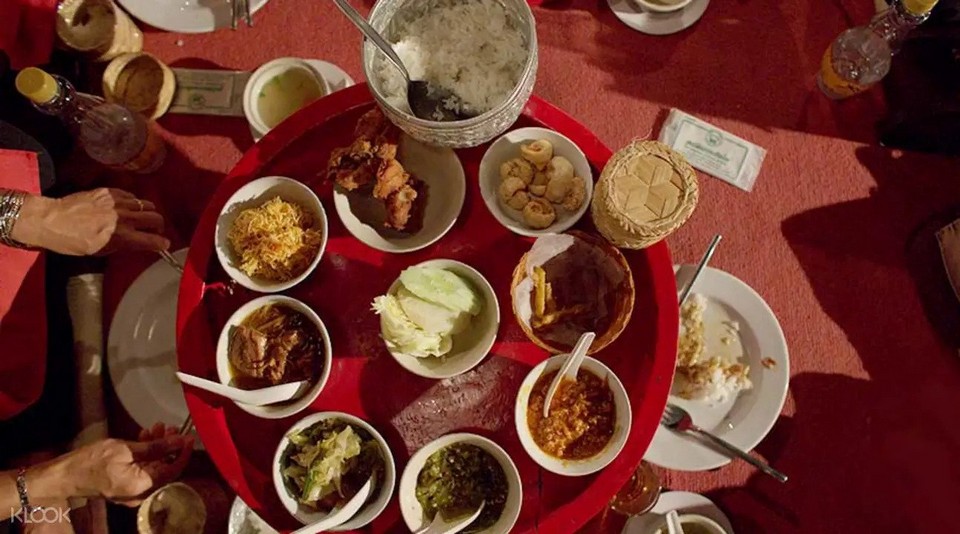 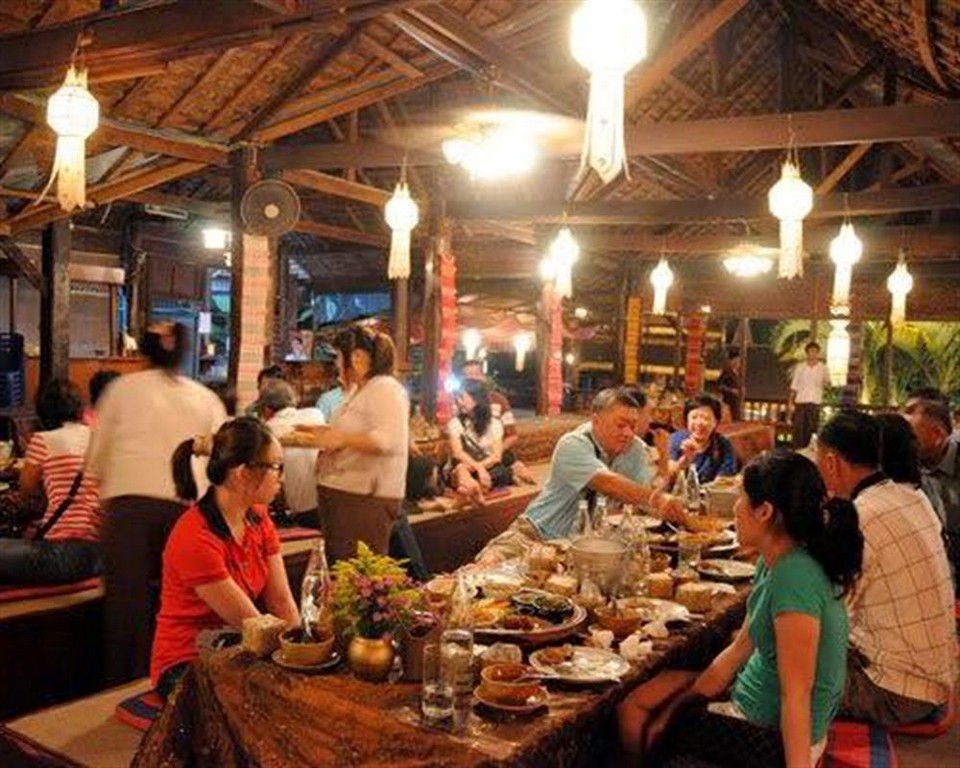 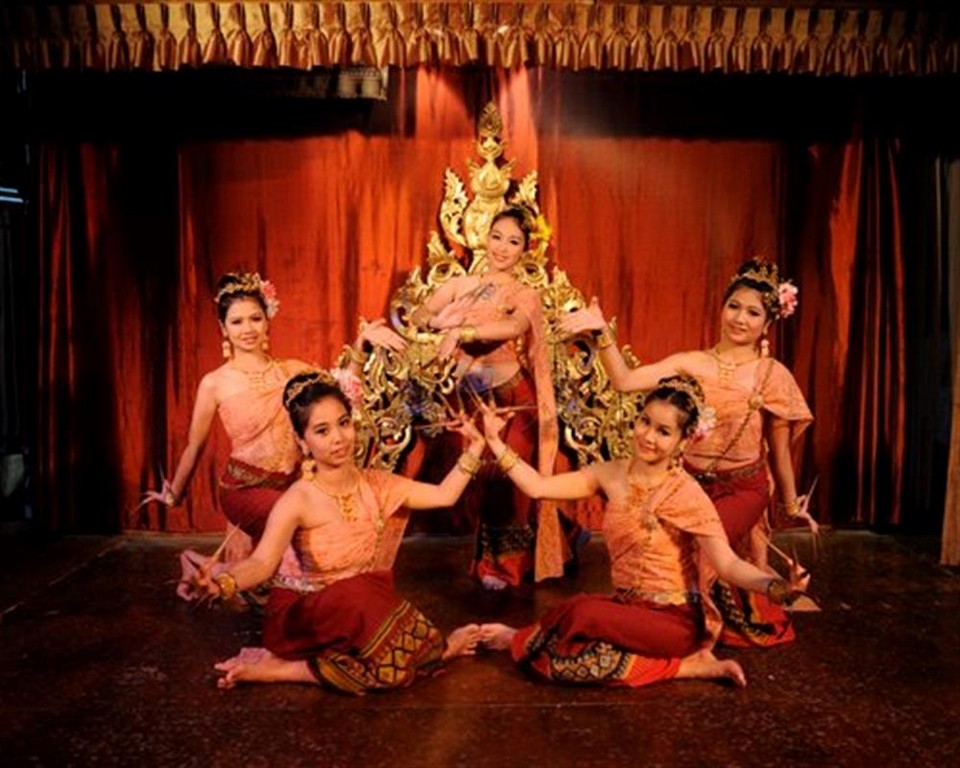 Another interesting surprise was that after the show, people took turns leaving the hall to leave, and right in front of the gate area of the Old Chiang Mai Cultural Center, visitors were entertained once more with some hilarious, funny folk dances. These are the dances depicting the activities of growing rice, farming, and the joy of a good crop… a lovely end to a wonderful night. 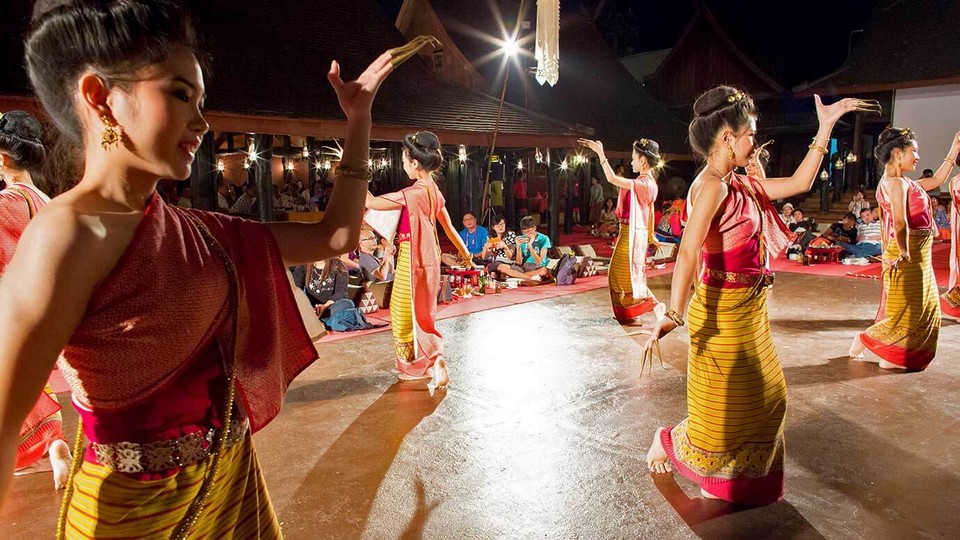 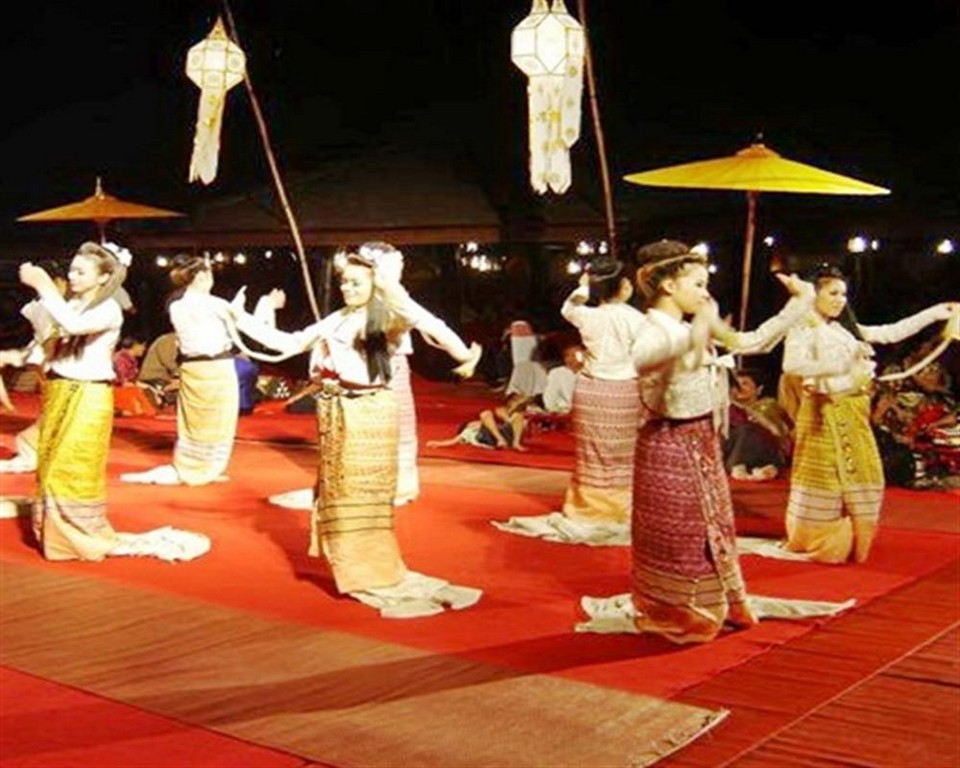 Today, there is no other way to join this Khantoke dinner and cultural show than you have to buy a ticket. There are 2 places in Chiang Mai that also organize Khantoke dinner show to serve the needs of experiencing and learning the culture of tourists: 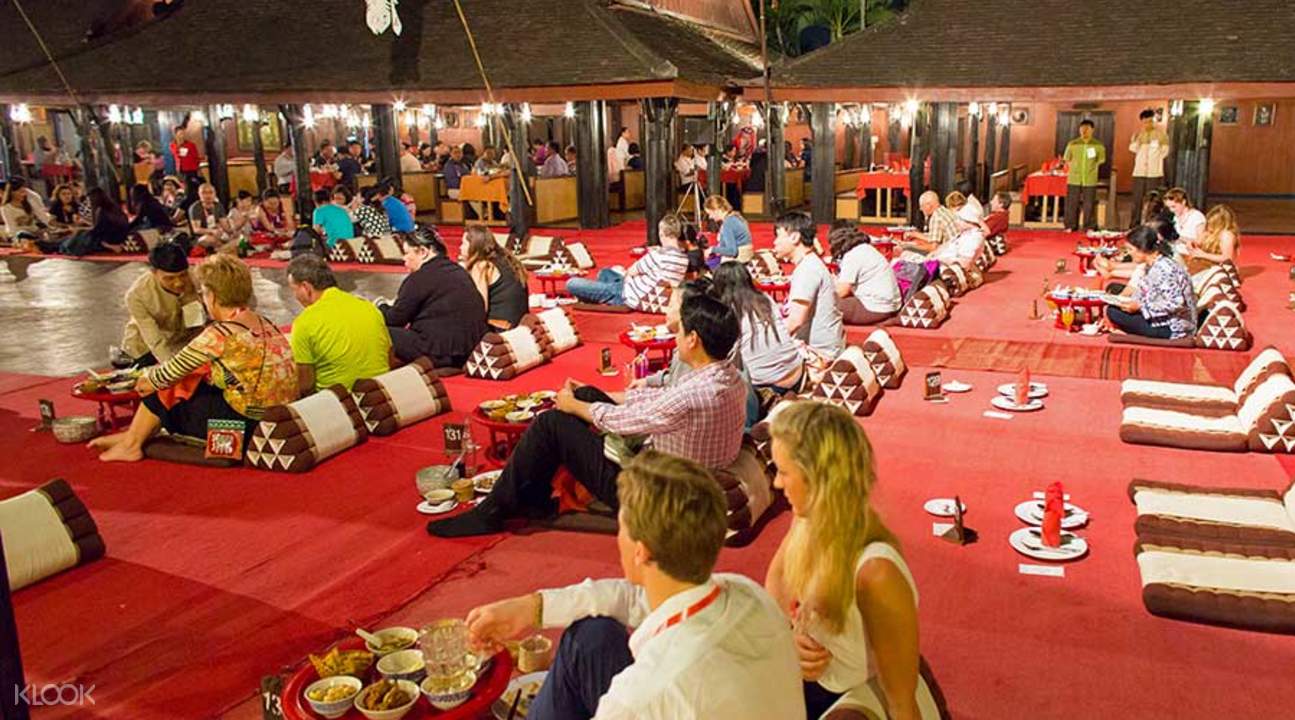 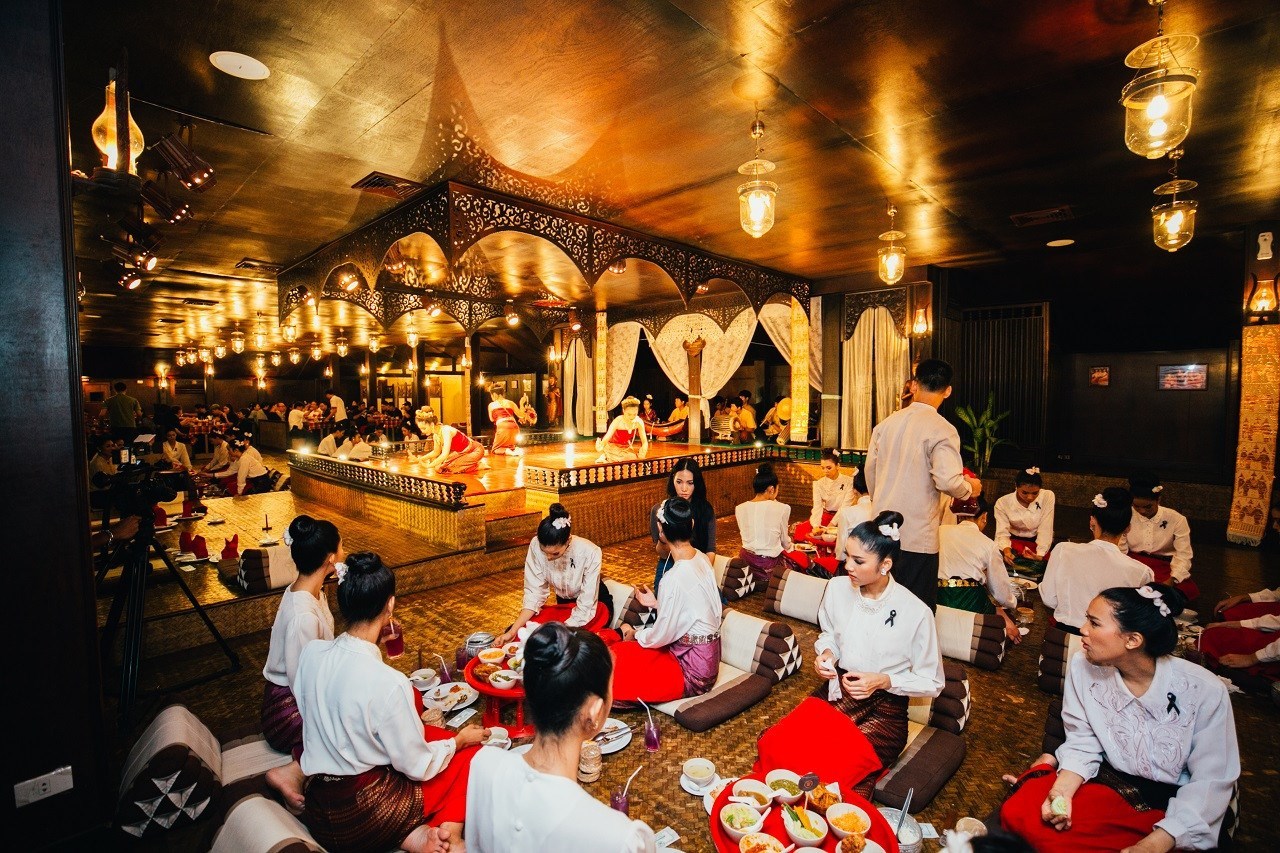 I received a booking confirmation voucher after successfully booking and paying. Because my schedule that day is quite hectic, I also book the pick-up option to stay healthy.

When it was time for the appointment (after a day of cycling around Chiang Mai, promptly returning the bike and returning to the hotel on time), the car arrived to pick us up and drive us to the cultural center. The shuttle bus is a minivan with 12 to 16 seats. We take the voucher and compare it to the guide in order to board the bus. In addition, there is an Indian couple, a Korean female couple, and a Japanese brother.

Note that you should be on time for your appointment because the wrong time of the appointment, people will not wait for long but will … continue going, the rules are so. 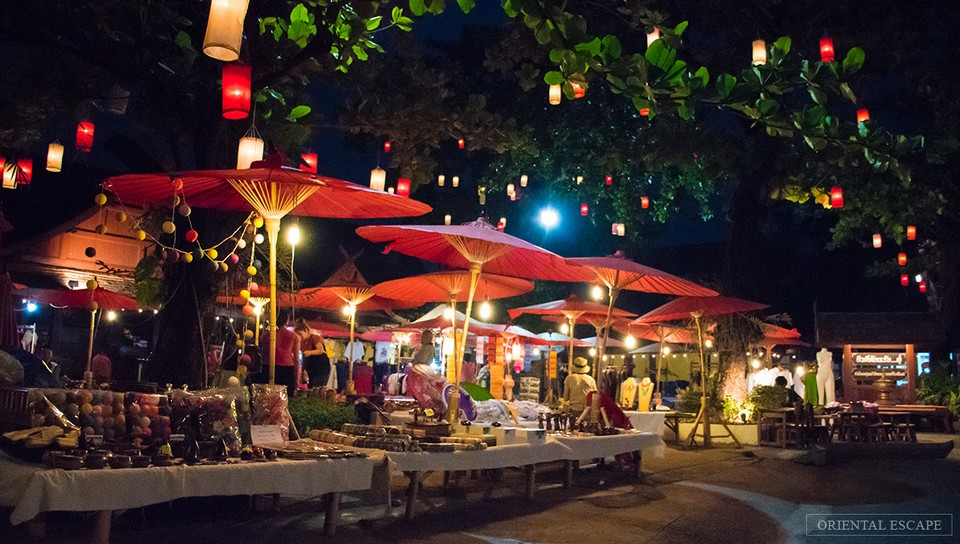 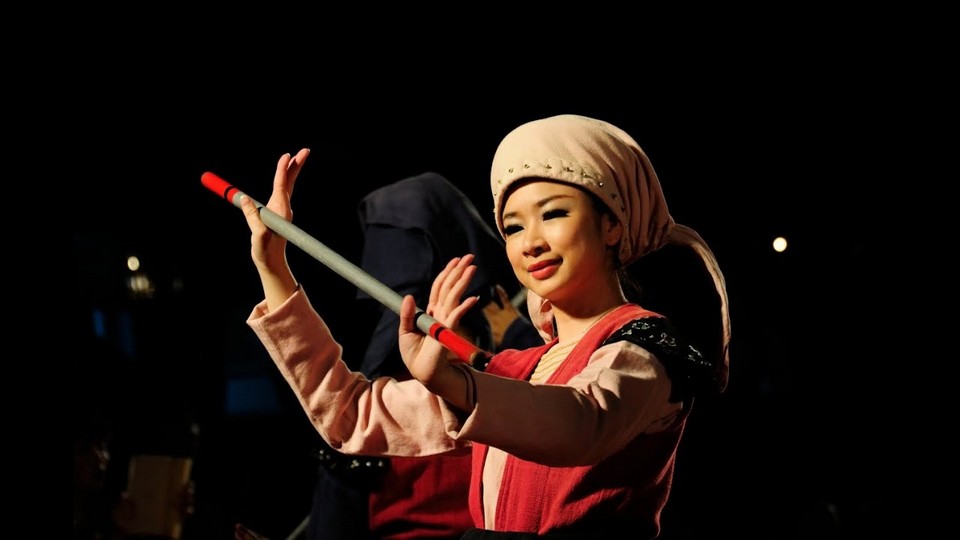 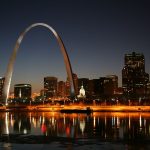 St. Louis travel blog — How to spend one day in St. Louis? Discovering the art of making Washi paper crafts in Japan