Explore the life of the last sea nomads in Bajau Laut.

I am a photographer. For many years, I have traveled around the world and witnessed the existence of the “forgotten ones”: those peoples who, despite the ravages of globalization, are trying to live according to their ancestral traditions.

Just a few days ago, I went off in search of the Malaysian Bajau, who are also known as sea gypsies. My expedition was no smooth ride, as it’s very difficult to come in contact with these people who live far away from civilization. 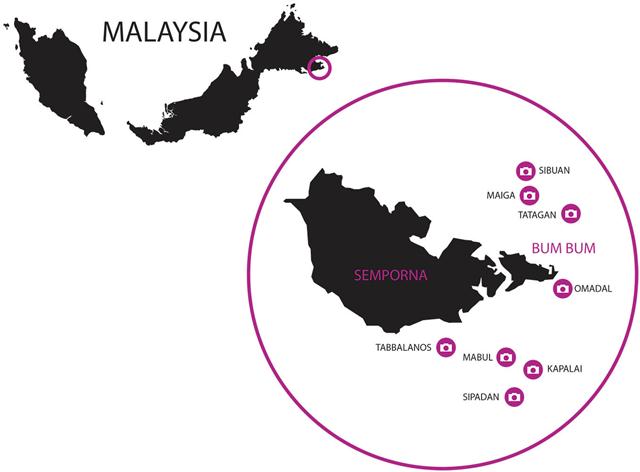 It was a true obstacle course. After several hours in flight, I touched down in Kuala Lumpur before connecting with another three-hour flight to Tawau. After an hour and a half by bus, I finally managed to reach Semporna, one of the largest cities in Borneo and an important harbor. It is from here that the tourists leave to go enjoy the wonderful dive sites that Malaysia has to offer.

Managing with a vague hope

While trying to find a solution on how to cross over to the other side, which only takes an hour by motorboat, I was amazed at how difficult it was to find someone who would agree to take me. Indeed, the few specialized agencies in the area refuse to sail anywhere but to the resorts. I was therefore forced to find a solution on the pier, walking for hours along the waterfront as I addressed the fishermen moored for the day, but unfortunately, no one spoke English. 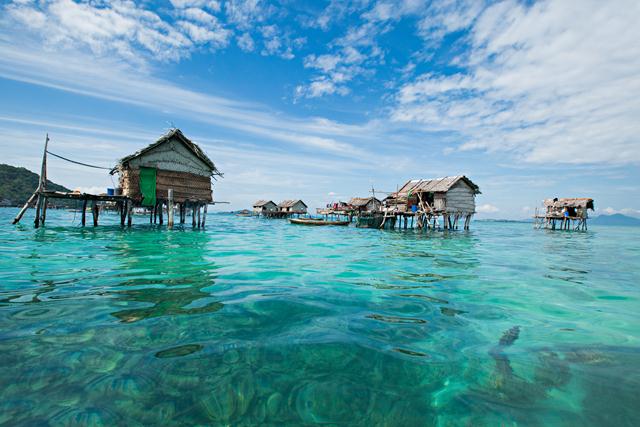 When I finally managed to make myself understood, they gave me exorbitant and unjustified prices. I had no choice but to sleep on-site, being careful to stay on my guard and keep my head down. In recent years, tourist kidnappings have become pretty common on this part of the island. Sometimes Islamist terrorist groups track down holidaymakers, follow them in order to establish the appropriate time to kidnap them, and then demand a ransom for their release. In November 2013, a Taiwanese tourist was killed in one of the bungalows at the resort where he was staying. Tension is omnipresent and kidnappings are becoming more and more frequent in this seemingly paradisiacal destination. Soldiers are everywhere to be seen in the main tourist areas but not on most of the islands I was planning to visit. 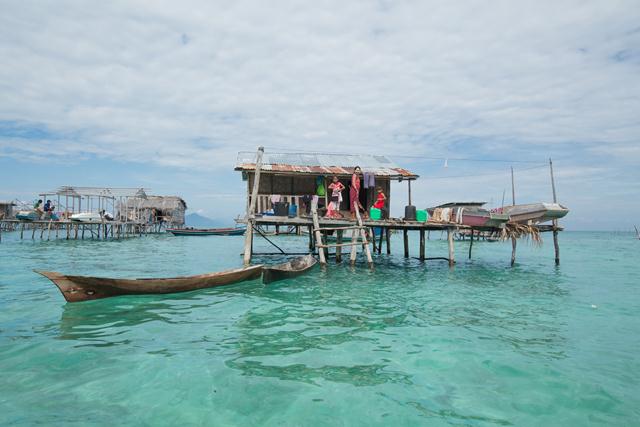 At the heart of this dangerous environment and concerned for my safety, I was almost about to give up. But my patience paid off. One morning I finally saw my chance to reach the islands after meeting a man named Karim, a Bajau who could speak a few words of English. This was a huge stroke of luck for the photographer who was longing to meet these people. Karim offered to take me to the islands inhabited by members of his ethnic group. He seemed surprised by my request, being as most of the travelers usually want to go straight to the lagoon’s coral reefs, and have no real wishes to meet the locals. But, touched by my interest, he accepted to take me with him, and we embarked on an expedition through Malaysian waters.

In the world of real mermen

Traditionally, the Bajau resided in small boats, sailing day and night with the currents, relying only on their fishing gear to make a living. This is how they earned the title, “the nomads of the seas”. Others used to live in hiding, and many still live in remote floating villages built on coral reefs within the trough of the lagoon. Today, many have come ashore to live on the small islands but continue to cultivate their nautical mastery while weighing their fish on a small scale. 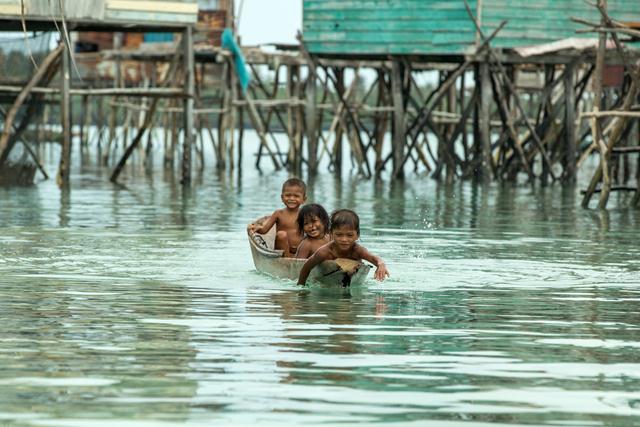 I was curious to know more about these men and women who have chosen to live remote lives, far away from the cities and their temptations. The sight that awaited me made my whole being tremble as I saw in the distance, on the horizon, an island lost in the royal blue immensity. I had arrived at Tabbalanos island. The ship dropped anchor within reach of a tiny island on which only a single tree stood against the sun. I was immediately struck by the magic of the place: a swing was hanging proudly on one of the branches, indicating the presence of children, who quickly came running out towards the boat, intrigued by the presence of this newcomer. 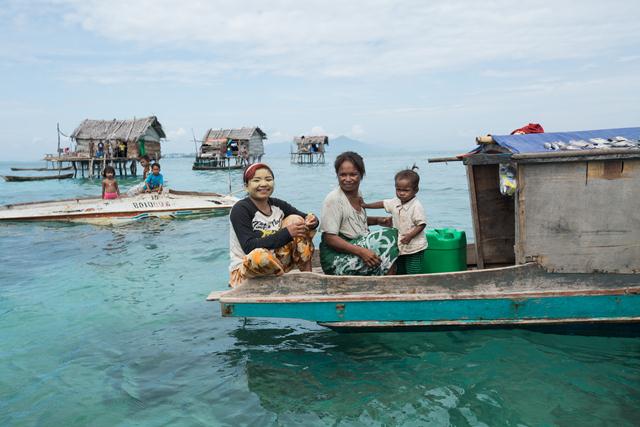 I was greeted by dozens of smiles. The little group of children gathering around me were over the moon with joy as I produced a packet of biscuits from the bag, bought a few seconds earlier from one of the shops. I’m used to being asked for food and money, but by distributing the biscuits and exchanging a few friendly looks, the Bajau children soon got used to my presence and went back to playing in the water. Of all the people in the world, the Bajau spend the most time in the water. These are real mermen, the people who only feels whole when in their element: the ocean. 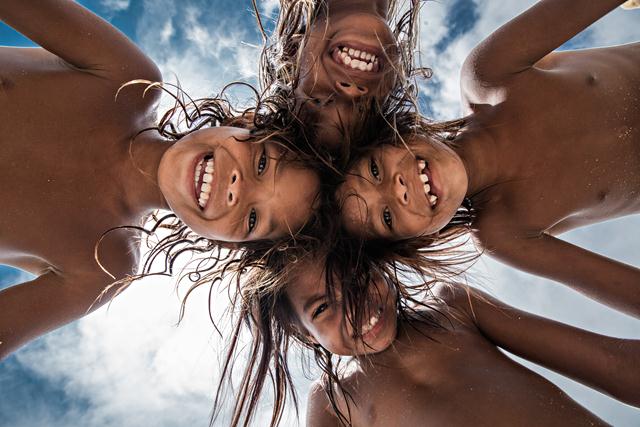 I could easily count the number of bungalows on the island, eleven altogether. Eleven small houses placed there between land and sea. It was later that I learned from Karim that each family had about five children. Women give birth here in their stilted huts. Most Bajau are born, live, and die on their land. Life is organized around fishing, and they have no knowledge of reading or writing. Regardless of age, everyone finds his place and helps catch fish. 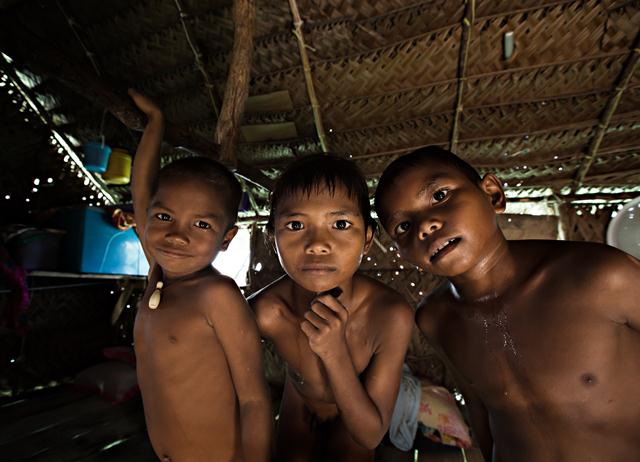 Younger children are constantly on the boats learning how to dive or swim, while those of about 8 years or older are already busy hunting. The Bajau do not know their ages. They have a rough concept of age, but measured time doesn’t matter much to them. Only the present moment counts. I took out my camera to capture the moments, in awe before such wonders, a feeling that you can easily understand when seeing this island lost at sea and it’s inhabitants totally at peace with their values and traditions. 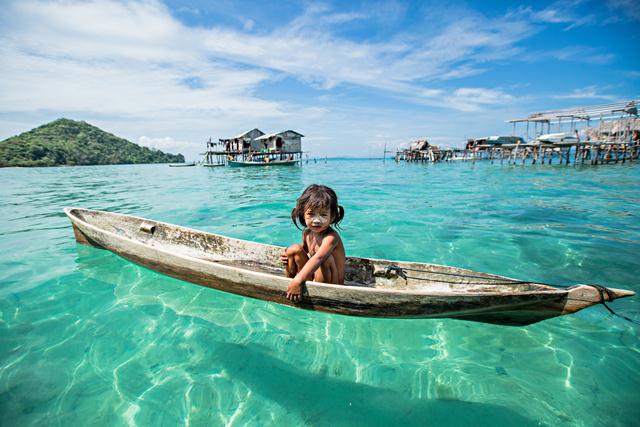 I managed to visit the other islands where the Bajau live over the next four days. Some of the islands such as Tabbalanos are not even referenced on the internet, perhaps because they are too small for the giant that Google has become. Yet this might be what has preserved the tranquility of its inhabitants. I traveled across the ocean and met the tribes on the islands of Mabul, Omadal, Sibuan, Maiga, and the village of Tagatan. The houses in Tagatan are built on stilts over the lagoon. I met a family there who had fled from the Philippines a few years earlier to settle in this peaceful haven. 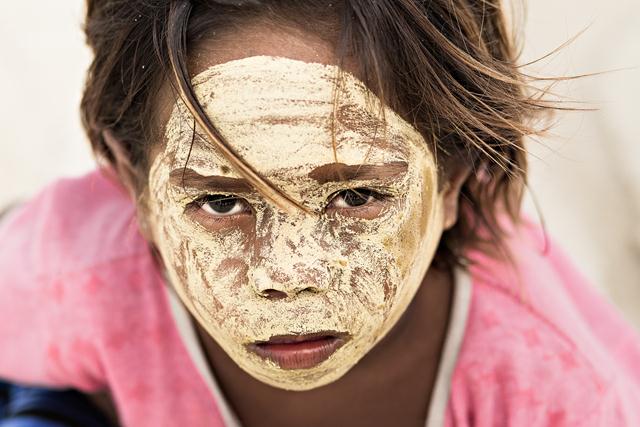 Though small, each of these places are different. Some of them are larger and contain more people. There are seventy families in Omadal living in stilted bungalows that are connected to one another by bridges so that the tight-knitted community may live together peacefully. You can find some small shops (food stands) and even a football field here. Upon my arrival, I was greeted once again by the children and took a picture of them with their hair bleached blond by the salt water. Women further on were smearing their faces with borak, a local turmeric paste they use every day to protect their skin from the sun. 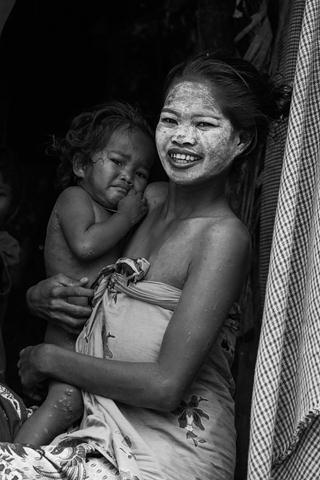 White skin equals beauty in Malaysia, and single women use borak everyday to find a spouse. Mothers apply it to their children’s skin because they are constantly exposed to the sunlight. I noticed a small boat arriving towards the beach loaded with provisions to stock the island’s stores and food stalls. I left a few minutes later with several pounds of fresh fish to take back to the mainland.

My expedition had come to an end. It was a welcomed break from the hustle and bustle of modern living, there in the midst of the blue immensity. I will keep forever in the depths of my heart the feeling of peace and serenity that emerges from these places, of these people who have nothing in common with our lives and who live only for and by the water. The Bajau, the nomads of the sea, are neither recognized nor accepted by the neighboring countries. They are there by choice, the choice to remain in their own little paradise.

+ Itinerary: It takes 2-3 hours to fly from HCMC or Hanoi to Kuala Lumpur, the capital of Malaysia. Fly from Kuala Lumpur to Tawau (2.5 hours), then take a bus to Semporna (1 hour) and travel by boat to the islands (1 hour).

+ Cuisine: Bajaus people live far from the civilization so there aren’t any tourist services here. On some islands where they live, you can find some small shops mainly serving the community.

+ Accommodation: At night you should go back to Semporna. There are some mini-hotels here for about 40USD/night. On some tourist islands such as Mabul, hotels are much expensive.

+ Discover: if you have a chance to visit the islands, you should spend time wandering around floating villages built on the coral reefs in lagoons.