Visiting Cambodia‘s Angkor Wat is like being granted the keys to another world for a short period of time. While I was there, I often imagined in my head that, like a certain CS Lewis novel, I must have walked through a closet and into another realm. Here are Angkor Wat Guide for you to visit Cambodia.

So, what is it really like to visit? What are the can’t-miss sights and the lesser-known gems? What time of day and year should you visit, and what is there to do after you’ve had your fix of this beautiful temple complex? Worry not because all these questions, and more, are about to be answered.

What is Angkor Wat anyhow?

Angkor Wat is the prized temple and showpiece of what is now known as the Angkor Archaeological Park. The city of Angkor itself was built in the 12th century to be an unparalleled Khmer capital for King Suryavarman II. When built, the ancient city extended over 400 kilometres, which makes it the largest pre-industrial city in history. While guesses about the city’s population vary wildly, some prominent historians suggest that the population could have been as high as one million people. Mysteriously, archaeologists are still unsure of what actually happened to this vast empire and its people. Especially, you must concern about these guide below for travelling Angkor Wat.

When is the best time to visit Angkor Wat?

Generally speaking, November to February is going to be your best window for a visit. I had the pleasure of getting some input from Channa, an incredible leader with a remarkable story, and she wholly concurs because, “it is not too hot, and there’s no rain.” Now, it’s worth noting that because you’ve got this window without the aggressive humidity and rainfall, you’re going to have more tourists, so it’s going to be quite a bit busier.

As far as timing for visiting, the Angkor Archaeological Park is open most days from 5am until 6pm. I would very strongly recommend getting there for sunrise. Most people who are visiting Angkor Wat will be staying in Siem Reap, and that means if you want to do this right, you’re in for an early morning. The tuk-tuk ride takes approximately 30 minutes, so factor that into your plans.

Once the park opens, you’re going to want to head straight to Angkor Wat to get the famous sunrise picture. The full breadth of the sunrise usually occurs between 5:30-6:00, so have your camera ready. And prepare for crowds.

Angkor Wat at sunrise is something to behold, do yourself a favour and get up to appreciate it.

What should you wear to Angkor Wat?

It’s important to note that at Angkor Wat, there is a dress code that must be abided by. You’ll need to wear clothing (preferably light) that covers your shoulders and knees. The sun is likely to be quite strong, so it makes sense to bring a hat, and you should be wearing good-quality walking shoes, you need to remember this guide before visiting Angkor Wat. Lastly, you might want to carry around or pack a thin raincoat as weather can be a touch erratic.

What do you need to see if you’re short on time?

If you haven’t got much time, you’re going to want to make the most of every moment. The good news is that you can cover a lot of ground in just a little bit of time if you’ve planned with purpose. There are some places that you simply need to see if you’re visiting the Angkor Archaeological Complex, and they are, in my humble opinion, the following:

Firstly, the Angkor Wat temple itself. I’d recommend taking in the views of Angkor Wat at sunrise, then going directly after to explore the famed temple. Angkor Wat is the pièce de résistance of the complex, and the postcard picture you’ve seen a million times.

Its pointed towers rising up from the base structure are a classic example of Khmer Architecture of the 12th century, and, based on its prominence, some suspect that this structure was actually constructed by Suryavarman to be his final resting place. Angkor Wat, in short, is a temple like you’ve never seen, on a scale you couldn’t have anticipated. It doesn’t disappoint.

Angkor Thom, known as the Bayon Temple, is also an absolute must. Technically Angkor Thom is a city built by the ruler Jayavarman VII and the Bayon Temple is within it, but they’re often thought of as synonymous. Before I move forward describing what the Bayon Temple is, you should note that there’s no need to be intimidated by the distances between temples as you can take a tuk-tuk between sights to save time if you’ve only got a day.

The Bayon Temple is a very impressive temple built towards the end of the 12th century, and it’s beyond photogenic. What makes it unique is the smiling faces which jut out of the rocks and greet you with their warm disposition.

Lastly, you’d be remiss to leave without spending some time at Ta Prohm Temple, which was constructed roughly around the same at Angkor Thom, and commissioned by the same ruler. Ta Prohm was constructed to be a monastery and university, and what is perhaps most impressive is that it’s still in remarkable condition considering when it was constructed. What makes it truly famous, however, is the way the jungle has grown into and straddled the structure. It’s an example of what happens when a man made structure is essentially given back to nature. To me, this is the most unique spot to snap a photo.

What should you see if you’ve got time to spare?

The sights listed above will astonish you, but they’re far from the only sights to see. Preah Khan is also dazzling in its own right, and it’s not too far away from Ta Prohm and other more famous temples. Preah Khan was also built by Jayavarman VII (12 century), but, in this case, to honour his father. It served as a massive administrative headquarters of sorts, but is now famous because of the overgrowth that has added a layer of mystique.

Jayavarman VII also built a small temple known as Ta Som. It’s a temple dedicated to his father, Dharanindravarman II, and it’s not far from Angkor Thom, which makes it well worth checking out. It’s a single-level shrine that has been left unrestored, and also exists in congruence with growth of the jungle. This is a nice temple to check out if all the other more popular temples seem a little crowded.

Perhaps the unsung hero is Banteay Srei, which you wouldn’t be able to fit into a short visit, but is certainly worth fitting into an extended visit. It’s about 25km away from the more well-known temples, but it often receives rave reviews from tourists due to the fact that there are less crowds, and it’s build with red sandstone. It’s not large and imposing, but it’s gorgeous, ornate, and offers something a little different. Not to mention, it was built in the 10th century, so it predates much of what you’ll see elsewhere!

What can you do in Siem Reap?

I’m not going to lie, when I was staying in Siem Reap, I likely stayed out on Pub Street a touch longer than I needed to the night before heading to the Angkor Archaeological Park. Now, while I wouldn’t recommend that, I also can’t say I regret it. Siem Reap is a fun place to be.

That being said, Siem Reap is a lot more than just “Pub Street,” that’s for absolute sure. The food in Siem Reap is just remarkable, and it’s a good place to dive into Cambodian cuisine which, in my opinion, deserves just as much respect as Thai or Vietnamese. I personally love Fish Amok, which is essentially a fresh fish curry (usually served in a banana leaf), but I’m also a fan of Lap Khmer which is more or less beef salad. I’d also say that you’re safe trying most curries, especially red curries, as they’re to die for.

One of the more unique experiences that I had in Siem Reap was taking one morning to go out to the Tonlé Sap Floating Villages. It was fascinating to see how people lived seasonally when the lake flooded, and the communities that formed more or less on stilted houses.

What to do in Siem Reap according to top Cambodian guide :

Go to Phare (a circus with dance, theater and live music that tells Cambodian stories). Go to the Angkor Silk Farm. Go shopping, visit local villages and monasteries, and try a cooking class.

I’ve been to the Angkor Archaeological Park, but I’m yearning to go back because it’s just that special. I’ve always been a creative and imaginative person, and I feel like visiting this place unlocked doors I didn’t know existed for me. It was like watching fact and fiction blur together before my eyes.

That’s what makes this place so unbelievable, it’s the idea that, unless you go, you just can’t imagine being there. I look around today at the skyscrapers that populate the skylines of most metropolitan cities, and I just can’t imagine them being around for too long. Then you have the Khmer temples which have endured centuries, and will still be there long after the skyscrapers are gone. 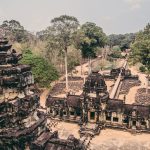