Ho Chi Minh City continues to swell to over 8 million residents. Over the past five years alone, the population has seen an increase of 1.3 million people. That makes it one of the fastest growing cities in the world and one which, by 2025, is expected to hit as many as 13.9 million residents. FocusAsia Travel will share you tips to understand Ho Chi Minh City’s districts.

Those numbers will be no surprise to anyone who has witnessed the four-block Masteri development change the face of District 2, or the construction of the city’s tallest building, Landmark 81, in Binh Thanh.Ho Chi Minh City is a city that sprawls out endlessly into low-rise developments and industrial zones like the ones you’ll find in Thu Duc and Binh Tan. For many of us, however, the city seems small as we gravitate to areas like District 1. It’s an area containing deep contrasts like the chaos of backpacker Bui Vien, more recently dubbed Bui Vien Walking Street, only a ten-minute drive from the opulence of the six-star hotel, The Reverie, on Nguyen Hue. Then there’s the tree-lined boulevards and enigmatic street food of District 3, the reclaimed swampland of self-sufficient District 2, and the grimier dynamism of Phu Nhuan with its restaurant enclave of Phan Xich Long.

In total, the city is broken into 24 districts consisting of 19 inner city districts and 5 suburban areas, some numbered and others named. Districts one and three are considered the modern heart of the city. Each district in turn, is broken down into even smaller sections called wards. This is a simple way to manage and organize addresses and specific locations, especially within districts that cover large amounts of land like triangular Tan Binh that reaches downwards from the airport, or the diamond-shaped expanse of District 9.

Take note that these are not districts but smaller neighborhoods. They get a mention here due to their eclectic international creative communities and their abundance of cool pop-up bars, cafes, and stores.

Slow but careful investment is making its way through Da Kao, giving rise to the area’s recent popularity. From music and art events to craft beer and edgy restaurants, despite setbacks like the loss of Decibel, Da Kao has continued its development into one of the hottest places in town. It’s situated on the north side of District 1, between Binh Thanh and District 3.

Must-see: Belgo, Bunker Bed and Breakfast, the Rehab Station and [A] Coffee

What used to be one of our poorest areas due to its over-the-river location, Thao Dien has undergone a complete metamorphosis from a dirt road in the swamp to one of the most developed wards in the entire city. The streets of Xuan Thuy and Thao Dien make for two of the most international strips around, chock full of bars, restaurants, galleries, schools, and spas. Thao Dien is synonymous with District 2, as its best-known ward, and just a step off the Hanoi Highway. In our D2 spotlight below, to avoid repetition, we’ve chosen different destinations to seek out in much the same area.

Must-see: The Deck, Mekong Merchant, and family-friendly Snap Cafe, or try more recent arrivals like MAD House and An Cafe

Often referred to as ‘Little Korea’ because of its large Korean population (roughly 20,000 people), Phu My Hung is home to a slew of Korean and Japanese restaurants, upscale cafes, famous chain restaurants, and bars. The area has undergone vast urbanization over the past few years making way for world-class shopping malls like Vivo City and The Crescent Mall.

Just a few years ago this area was largely industrial, and today it still feels like the location for a movie set in pre-1975 Saigon. Home to Yersin market, where hardware materials are sold, the nearby streets took on a similar persona. However, the recent development of Nguyen Thai Binh Ward has brought forth a series of trendy food and beverage establishments, giving these streets a lively underground atmosphere.

This is the city’s business hub and the commercial core of Vietnam. D1 (District one) is viewed as the prime location and maintains the highest standard of living throughout all twenty-four districts. Note that despite its imposing corporate developments, Vietnamese daily life is still experienced at every corner and there is, culturally, much to absorb in this vibrant part of town. It’s also the place to go for banks, consulates, administrative buildings and international cuisine.

District one is 6 kilometers south of Tan Son Nhat International Airport and covers an area of 7.7 km2. The population is estimated at 205,000 and has a density of 26,000 inhabitants per square kilometer. Compared to many other districts, that number is fairly low. It is bordered by the Thi Nghe canal, D3, D4, D5 and Binh Thanh.

It’s often referred to as the D2 ‘bubble’ by residents resistant to the idea of venturing over the Saigon Bridge back through Binh Thanh to the central districts. That’s been enabled by rapid recent developments that have made this a self-sustaining part of town with gyms and spas, like Nutrifort and Thao Dien Village, supermarkets like Annam Gourmet, bars like the District 2 branch of Bia Craft and co-working spaces like the Hive.

Historically, D2 was one of the poorest areas in Ho Chi Minh City as the Saigon River cut residents off from the city’s beating heart. However, recent prioritized development and vast urbanization have transformed District 2 into one of the most exclusive districts in the city. The Thu Thiem tunnel, opened in 2011, even connects D2 to the edge of Districts 1 and 4.

There are bigger sidewalks, and it is much more westerner-friendly than the dense, congested Cho Lon (or District 5), for example. Residential towers like Masteri Thao Dien and The Vista have changed the game attracting flocks of people from around the world, encouraging further growth in the market.

Do note, that this area experiences extremely bad flooding on a regular basis, leading to serious transportation problems and potential water damage depending on which part you’re in.

D2 is about a 20 minute drive (7.5 kilometers) from the border of D1. The most recent census puts the population at 140,621 residents and the area sprawls over a total area of 50 km². The population of District 2 is much less compact with a density of 2,800 people per square kilometer. It’s one of the biggest districts in the city, but conversely houses a relatively small population.

D3 is well-known for its beautiful colonial architecture dotted with restaurants, temples, parks and street food vendors. It’s a wonderful mix of old and new, with a favorable combination of cheap, middle and high-end shopping, dining and housing. With its fantastic location neighboring D1, the area attracts people from all walks of life creating a unique environment with much to do and see.

Estimates put the population at 188,945 and its total area is only 5 km². The density is average at 38,000 people per square kilometer.

Street food, street food, and more street food. Over the years, D4 has undergone substantial development while remaining one of the city’s more characterful locations. It’s quickly becoming a more popular place to live, eat and drink, marked by the development of residential towers like the Icon 56 that are rejuvenating the district’s personality.

It remains a vibrantly Vietnamese district with some of the best and most affordable grub in Ho Chi Minh City. If you like to be knee deep in Vietnamese culture, this is your spot. Over the past few years, it has begun to flicker with co-working spaces, drawing a young independent community of freelancers and start-up entrepreneurs. We suggest you check out Circo if you’re looking for this kind of cohabitation.

Just a hop across the river from central District one, D4 is only 10 minutes (3 kilometers) or so out, bordered by the Saigon River, D2 and D7.

Experts put the population around 183,000 and the resident density is pretty heavy at 46,000 per square kilometer. District 4 is the smallest of all 24 districts, with an area of only 4 km2.

D5 holds large historical and cultural significance due to its Chinese heritage. It is home to Vietnam’s own Chinatown which people refer to as ‘Cho Lon’. During holidays like the Mid-Autumn Festival, many visit Chinatown’s street-side stands on ‘Lantern Street’ located on Luong Nhu Ngoc. Steeped in tradition, with ornamental decorations and rich, cultural displays, the local holiday celebrations are in full swing in these parts of town.

District 5 is also famed for its specialty market shopping and flavorful Chinese fare. Bursting with teahouses, pagodas and huge markets, there is much to take in.

The flashy, new high-end drag of Phu My Hung is what people most often associate with district seven. As you would expect from such a young, self-sustaining neighborhood, its draws a select, international crowd. Most street food and vending is banned in this area, allowing for cleaner, wider sidewalks.

It attracts families, foreigners and locals alike, projecting a completely different vibe than other parts of town. Life moves a bit slower here, and it’s packed with restaurants, leading international schools like Saigon South, coffee shops, bars and clinics. If you want to escape the fury of the inner city and are in need of more privacy, this might be the place to go.

The main drawback of D7 is its distance which makes the commute to the center or further north a bit of a journey.

D7 is 6.5 kilometers or 20 minutes south of the city center. Although the population appears high, around 274,800, residents still enjoy real wiggle room with a density of only 7,700 people per square kilometer. D7 is one of the biggest, stretching itself out over 35 km2. It is bordered by D2, D4, and D8.

Getting to the city center can be a haul, but what you lose in distance, you make up for with its price. From food to accommodation, the cost of living really does drop dramatically here. And recently, more and more expats have been relocating to Phu Nhuan. They remain for the thriving street food scene and affordable cost of living, joining a sizeable population of young Vietnamese.

Phu Nhuan is 30 minutes (10.5 kilometers) from the middle of D1 and covers 5 km². It is densely populated with 36,000 inhabitants for every square kilometer of land. Most recently, the population is said to be at least 181,000. Phu Nhuan is bordered by D1, D3, Binh Thanh, Tan Binh and Go Vap.

Binh Thanh is beginning to see its own spurts of growth driven by recent investment. As it sits next to D2, just a short 5-10 minute drive away, its popularity is on the rise among expats, particularly in new developments like Pearl Plaza.

Yes, Binh Thanh can be a bit of a haul from central D1—depending which part of the relatively large district you call home—but many view its close proximity to D2 as compensation.

If you don’t mind living in an area that is a little rough around the edges, this could be an ideal location for you. There’s an abundance of street food and a mix of international and local restaurants. It has a real local buzz to it, and you certainly get the feeling you are a bit outside of the Ho Chi Minh City nucleus.

Binh Thanh is 6 kilometers from the city center and it can take about 15-20 minutes to reach this area depending on the time of day and the traffic. It’s bigger than District 1 and 3 but overall of average size and covers a space of nearly 21 km2.

Binh Thanh is home to a large population numbering up to 470,000 and its density is nothing unique, sitting at 23,000 residents per square kilometer. It is bordered by D1, Phu Nhuan, D2 and Go Vap. 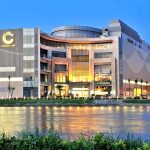