Our country has an S-shaped curve with four points at the east, north, west and south, of which the north pole belongs to Lung Cu commune, Dong Van district, Ha Giang province. Coming to Ha Giang, visitors should not miss out the Lung Cu flagpole. This is the symbol of Vietnam.

Lung Cu flagpole is a national flagpole located atop Lung Cu which is also known as the Dragon Mountain (Long Son). This is where the northernmost point of Vietnam is. In fact, according to the measured geographical data, the northernmost point is still about 2km away, but before now the Lung Cu flagpole has always existed in the Vietnamese’s  heart as a sacred symbol of our national sovereignty. From the car park halfway up the mountain, visitors conquer 286 stone steps up to a height of 1700m. Here, visitors set foot on Lung Cu top, standing under the red flag of yellow stars and flying.

According to legend, in the past, the fairy dragon flew down from the sky on the highest mountain at the top of the village to admire the majestic mountain landscape here. Realizing that the people in highland areas all year round have a shortage of water and their life is difficult, so before flying to heaven, the fairy dragon left his eyes for the villagers. That pair of “longan” turns into two lakes, one side is the lake of Lo Lo Chai village and the other is the lake of Than Pa village. Thanks to them, people have water for irrigation and daily activities. The strange thing is, even at this towering height, the water in the two lakes is always clear and never dry.

Currently, at Lung Cu border, there is a station specializing in protecting the flag on the Lung Cu flagpole. Every 7 to 10 days, the flag must be replaced, because the wind on Lung Cu is very strong, making it easy to be damaged. Old flags are kept as gifts for special guests coming here. This is a gift that has a sacred meaning to any Vietnamese people. In an essay, poet Vu Duy Thong said: “As a Vietnamese, if I have not once been able to stand on Lung Cu peak to see the national flag, it is such a pity!

Climb to the top of the flagpole, you will be a bit shocked because the wind is quite strong. The 54-square-meter flag represents the 54 ethnic groups that flutter in the wind, proudly asserting the immortal sovereignty of the country. If you get up there at the right time, you will be fortunate to touch this sacred flag. Don’t forget to record that moment to show off to your friends. From the top of Lung Cu, visitors can enjoy a full view of the majestic mountains. On the left is the abyss Thene Vene. To the right is the watershed of the Nho Que River, which is likened as the border between Vietnam and China.

Lung Cu truly possesses a captivating beauty. This is the land of Shan tea, honey wine, corn wine, fading peach, pear flower, white snow and a winning dish in the fair. There are also special traditional cultural features of ethnic groups such as: Mong, Lo Lo, Giay, etc. It is beautiful all year round so it is not too difficult for you to the suitable time to víist. Every season has its own beauty. If you do not come here during the triangular flower season, you can come here in spring. You will be immersed in heaven with hospitable people. After hard- working days, why don’t you reward yourself with a trip to conquer Ha Giang? 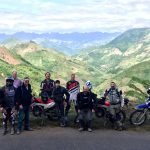