I just got back from my first trip to India. As most tourists do, we took in all of the sights while we were there. We visited the old town of Kochi and the Kerala backwaters, but we also met many people going about their daily lives; people who work to support themselves and their families.

Yes, many people had jobs similar to those found in Western countries. We did, however, meet people doing jobs that could only be found in India. Here are some of the people I met in Kerala, India, and the jobs they do.

We went to a massive outdoor laundry in Kochi. Laundry is nothing out of the ordinary; however, the sheer size of this operation, as well as its outside location, were elements I had not seen before.

If you’re unfamiliar with coir, it’s the coarse fiber found inside coconut husks. Because it is both stiff and natural, it is frequently used for doormats. We went to a small coir cooperative in Kerala that did everything from spinning the fibers to making the finished product. (I bought a doormat and took it home!)

The factory’s looms were all made of wood. They appeared to have been in use since the nineteenth century (and very well may have been). There was little difference in the production process used today versus what was done more than a century ago.

Each and every part of the coconut is used. As previously stated, coir is used as a textile, but the shell and meat (copra) are also used.

Coconut oil is extracted from the meat of the coconut. It is then placed in a (very old) mechanical press, which extracts the oil from the coconut meat. Once the oil has been extracted, the used copra can be used as animal feed. During the extraction process, a fine line of oil is formed.

In comparison to the amount of coconut used, the amount of oil extracted appears to be quite small. The oil, on the other hand, has a much higher value than the original product.

We visited some clam fishermen in Kerala as part of one of our unique National Geographic experiences. The process was not at all what I expected, and it demonstrated a surprising amount of ingenuity in the mollusk processing.

The procedure begins with removing the clams from the water. The fishermen use a device that resembles a rake and is attached to a long pole by a large net. They then bury the rake in the mud at the lake’s bottom and scoop up the clams.

The clams they were harvesting were quite small, about the size of zebra mussels, and I wasn’t sure how they were going to get enough meat out of such tiny creatures. The solution was straightforward. To begin, they heated the clams in a large pot, which pried open the shell’s two halves. Shaking the meat out of the shells

The last step was to place the opened, heated clams into a massive sifter. The meat would be shaken loose by the sifter, then fall through the holes and be collected on a tarp. Brilliant!

While the majority of India is Hindu or Muslim, Kerala has a sizable Christian population. Many of the boats were given names based on Christian themes. Most people would not expect to see a boat named after a Polish pope in India! stacked rows of fish

Whereas we were used to seeing more traditional methods in many of the workplaces we visited, the fish market used modern refrigeration and cooling techniques.

After the morning’s catch is brought in, it is trucked to markets and restaurants throughout Kerala.

Traveling isn’t just about seeing UNESCO World Heritage sites and historical attractions (though I enjoy doing that as well), but it’s also about seeing how people from different cultures and places live and work. I’m sure we only scratched the surface of the many occupations available to Kerala residents, but what I saw was a unique perspective on life that I am grateful to have had the opportunity to witness. 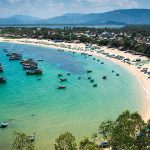 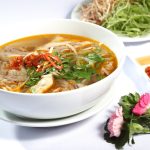 A food journey through Vietnam: bun cha to banh mi 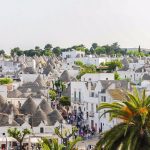 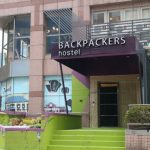 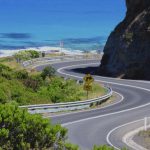 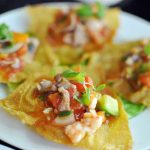