Being blessed with stunning scenery, architectural heritages, unique culture, Canada is the dream destination of many tourists.

Since its inception in 1977, the Harbour Centre has become a symbol of Vancouver. A restaurant and an observation deck 360 ° Vancouver Lookout are located on the roof. The glass elevator takes only 40 seconds to get from the ground to the top.

Going ziplining through the jungle, mountain cliffs, and ravines at Grouse Mountain range is one of the thrilling ways to discover Vancouver. Where to go zipline is less than 30 minutes by car from downtown Vancouver, and visitors can travel by buses and other public transportation vehicles.

The park is three hours drive from Vancouver and is famous for its three blue lakes.

The Bow in Calgary’s downtown is the city’s tallest structure and the second tallest structure in Canada outside of Toronto. Outside the building is a 12 meter high head statue of a young girl bending wire, which was completed in 2013.

The best aurora viewing area near Calgary International Airport is only a 1.5-hour drive away.

Try to enjoy life on the steppe in La Reata; horseback riding every day, eating barbecue, and listening to cowboy stories are all memorable experiences.

Churchill, Manitoba’s most famous polar bear species, and the Hudson Bay coastal areas are also home to the world’s largest population of Beluga whales, with 57,000 children appearing between mid-June and mid-May 9.

The CN Tower, located at an altitude of 548 meters, held the world record for the highest tower until the Burj Khalifa in Dubai surpassed it. Visitors can observe Toronto by joining EdgeWalk for a chance to walk around the 360 restaurant’s roof.

Every year, 3 million people visit the Hill. During the summer, here organized free yoga on the lawn at noon on Wednesdays.

This is one of the most beautiful waterfalls on the planet. This is a view of the Horseshoe Falls from above, near the US-Canada border.

Beautiful scenery surrounded by forests and lakes, away from the hustle and bustle of city life. Winnipeg, located 703 kilometers away, is the closest city.

This is where the world’s highest tides occur, with 100 billion tonnes of seawater flowing through the bay every day.

Flowing ice in Newfoundland and Labrador

The best time to see the ice stream here is in the spring and early summer. From Twillingate to St. John’s, visitors can admire the scenery by walking along the beach, taking a boat tour, or kayaking. 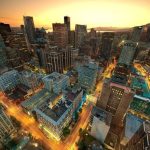