Thousand years of civilization Hanoi is an attractive tourist destination in the North. Coming to Hanoi, you can visit historical sites, scenic spots, and many other interesting places. With Focus Asia Travel explore the tourist destinations of Hanoi now!

If you have set foot in the land of thousands of years of culture, the Uncle Ho’s Mausoleum – Ba Dinh Square is  a tourist destination in Hanoi  that you cannot ignore. This place is the political center of Vietnam with the National Assembly House, Presidential Palace, Ho Chi Minh Museum, … 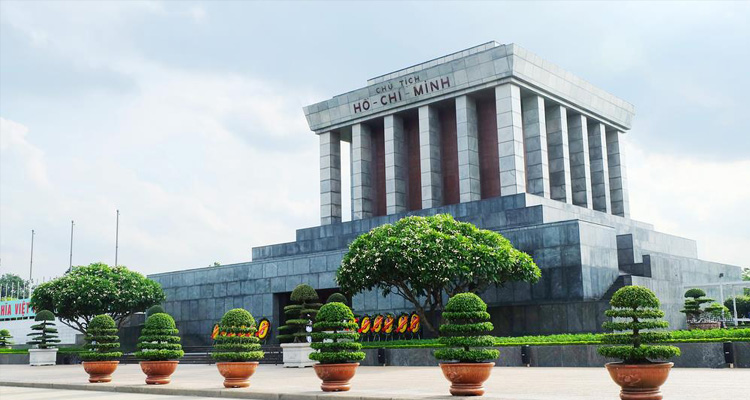 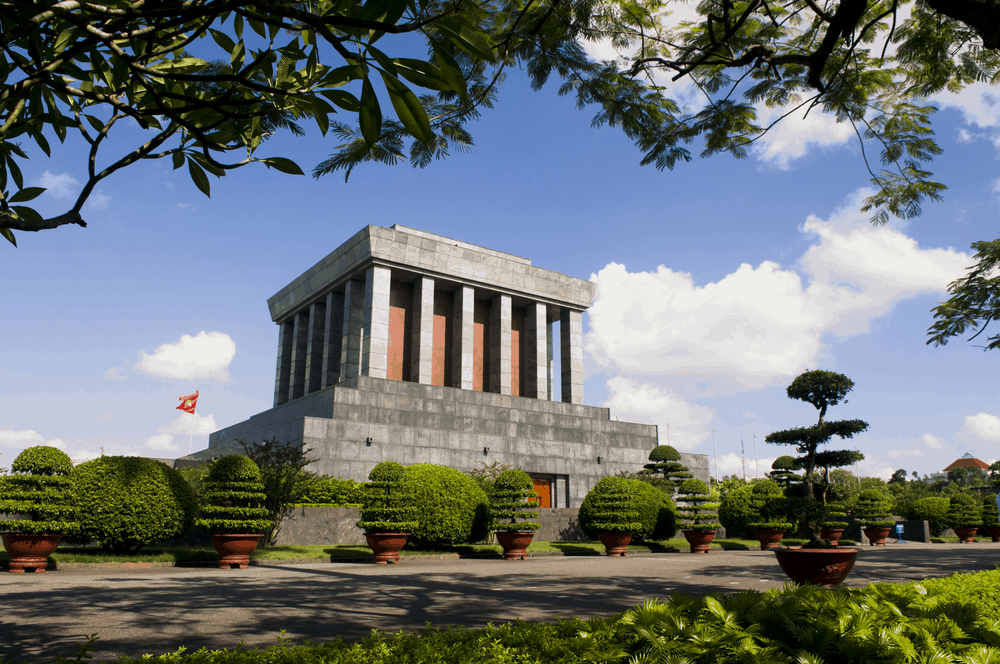 Ba Dinh Square is the largest square in Vietnam, located on Hung Vuong Street and in front of Ho Chi Minh Mausoleum. This square is also the place to record many important marks in Vietnamese history. In particular, on September 2, 1945, the President of the Provisional Revolutionary Government of Vietnam, the Democratic Republic of Ho Chi Minh, read the Declaration of Independence that gave birth to the Democratic Republic of Vietnam. This is also the place where the parades take place on the occasion of major Vietnamese holidays, and is also a place to visit, play, and walk for visitors and people of Hanoi.

Hoan Kiem Lake or Hoan Kiem Lake is one of  the places to visit in Hanoi  when traveling to the capital. Located in the center, Hoan Kiem Lake is like the heart of this thousand years old city .. The lake surface is like a large mirror reflecting ancient trees, flowing willows, ancient temples and pagodas. , mossy old towers, new high-rise buildings rise to the blue sky. 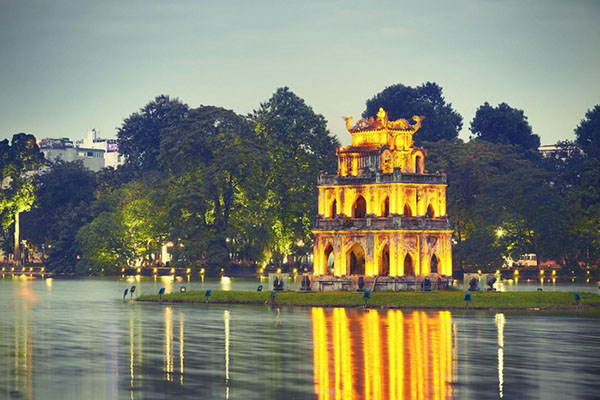 An interesting experience for tourists is to walk around the lake, you will see an ancient but modern Hanoi clearly. Next to the lake are architectural works such as But Tower, Research Station, The Huc Bridge leading to Ngoc Son Temple, Le Thai To Temple, Hoa Phong Tower,

If you want to learn about the life, culture and people of Trang An, do not miss the old town – one of the  tourist destinations in Hanoi  full of interesting and attractive to tourists. Hanoi Old Quarter is located in the West and North of Hoan Kiem Lake, where a large concentration of population lives with 36 streets. Each street here mainly focuses on selling a certain product. 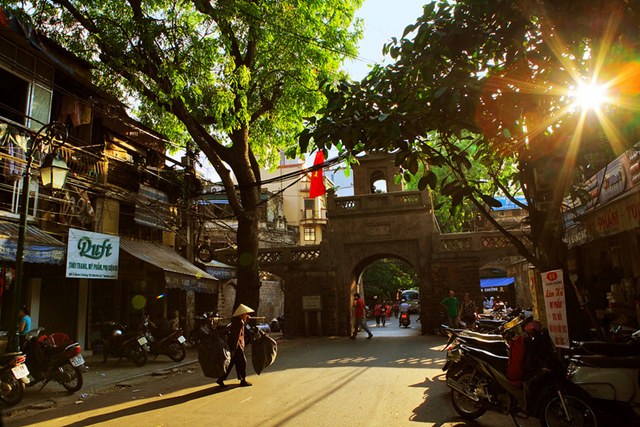 If you name  the best tourist attractions in Hanoi  in the past and now, everyone will think of Van Mieu Quoc Tu Giam. This is a leading cultural architectural complex and is the pride of the people of the capital when it comes to the thousand-year cultural tradition of Thang Long – Dong Do – Hanoi. 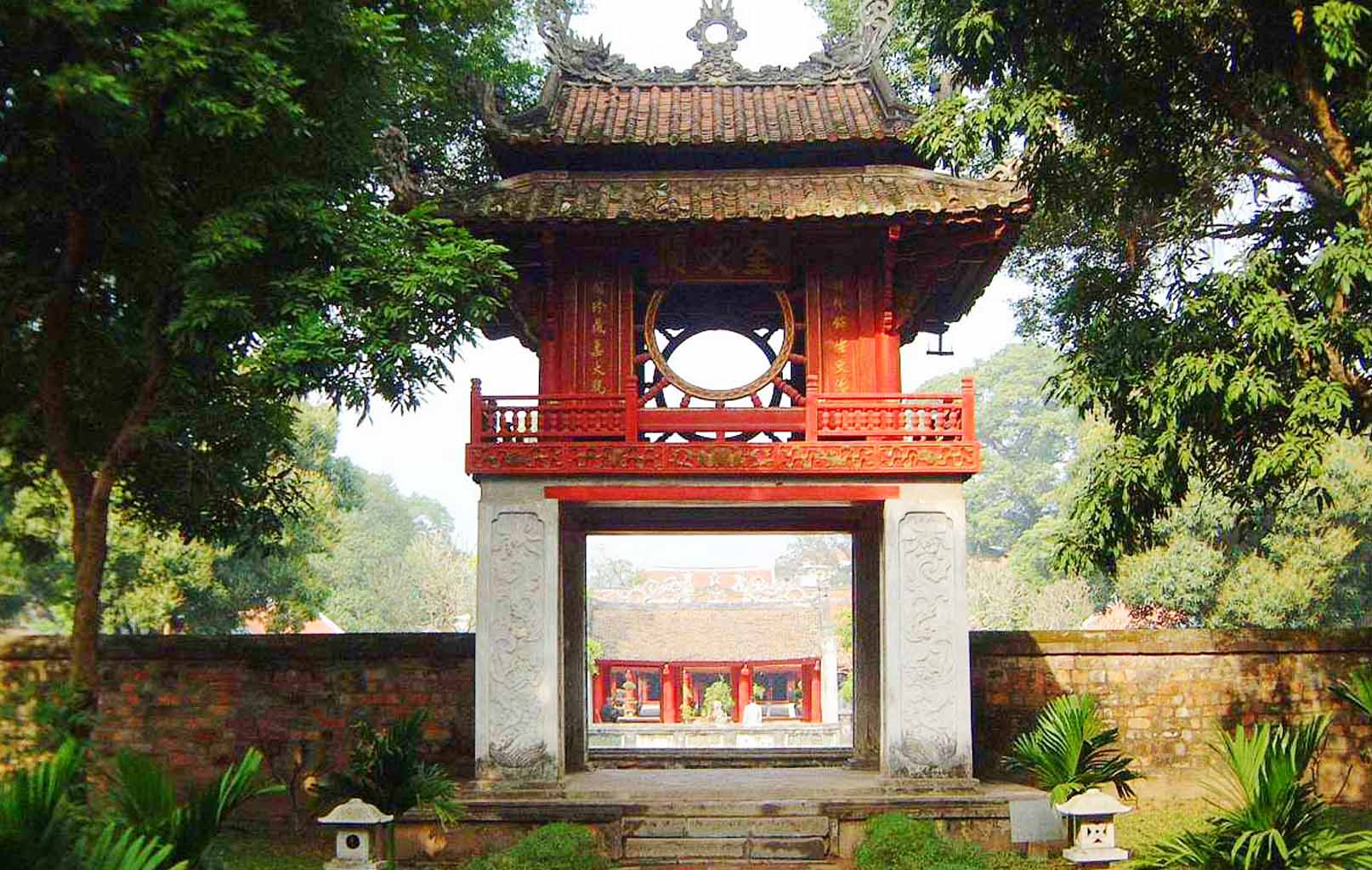 Van Mieu Quoc Tu Giam is considered a symbol of knowledge and education in Vietnam. This is a place of worship for the Holy, Confucian and Tu Tu Giam Chu Van An – a typical teacher of the high morality and dignity of Vietnamese education.

Located at 40 Nha Chung Street, Hang Trong Ward, Cathedral is one of  the interesting destinations in Hanoi , a place frequented by not only Christians but also a familiar place for young people and tourists. quadratic calendar. The church is designed in the style of medieval European Gothic architecture with high walls, dome and many windows. 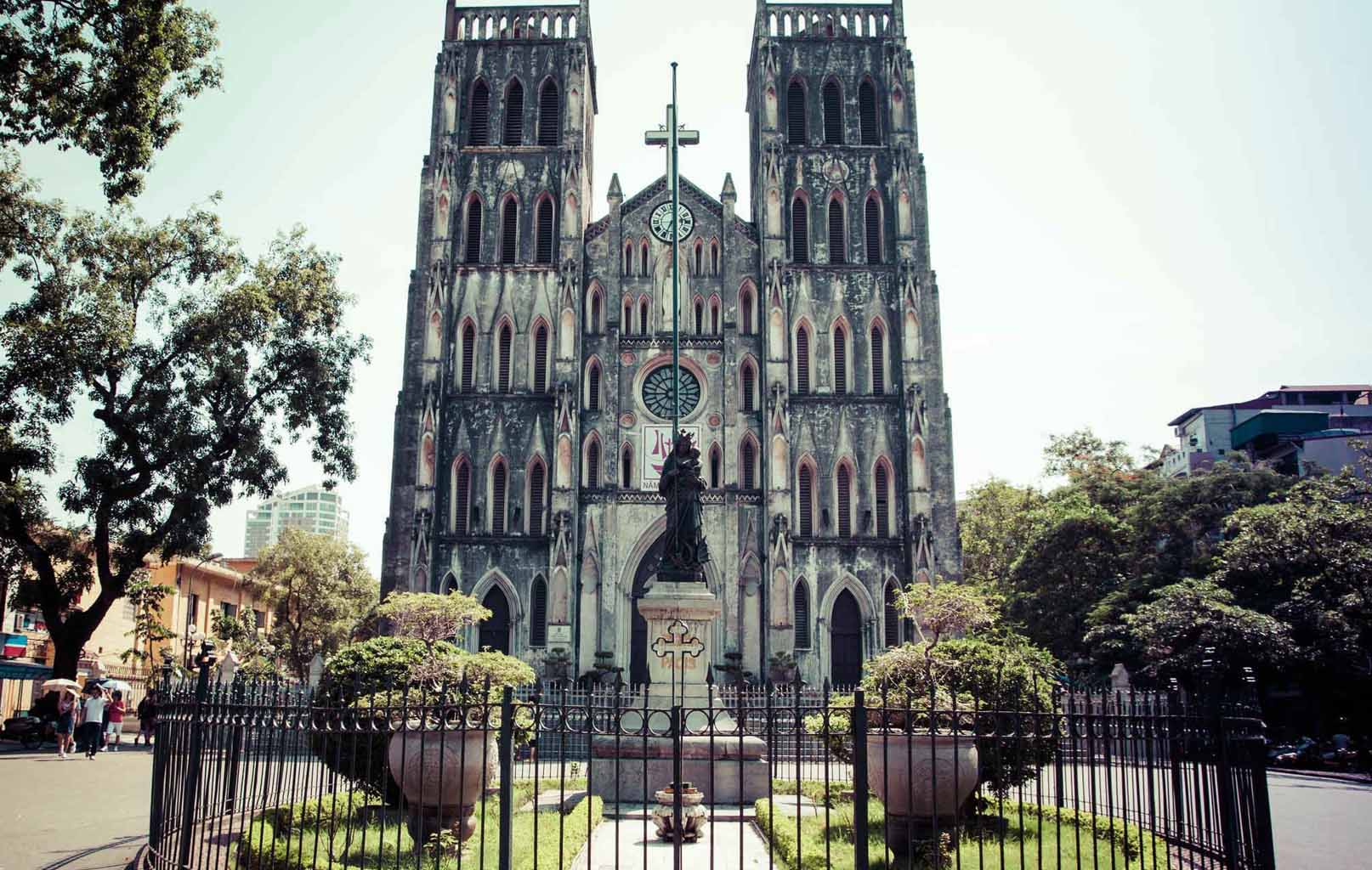 Inside the church, the sanctuary is engraved with a wooden pattern painted with golden vermilion paint combined with the system of stained glass Saint paintings. Feeling like standing in an ancient castle with classical music, you definitely want to try it.

Tran Quoc Pagoda is one of the oldest temples in Hanoi and Vietnam, located on a southern peninsula of West Lake, near the end of Thanh Nien Street, Ba Dinh District, Hanoi. Formerly the Buddhist center of Thang Long in the Ly and Tran dynasties with historical and architectural values, Tran Quoc Pagoda is famous for being the sacred Buddha’s door, attracting many Buddhists. , visitors, domestic and foreign tourists.

In early 2017, Tran Quoc Pagoda was included in the  list of 16 most beautiful temples in the world  voted by Daily Mail (UK) .  Visit Tran Quoc pagoda, make sure you will be amazed by the quiet space, poetic beauty of “lotus” floating on the surface of West Lake.

West Lake is one of the famous landmarks of Hanoi capital, this is considered a “giant stage reflecting the clouds, sky and city landscape”. The scenery along the West Lake is very poetic and dreamy. Surrounding the lake are rows of tall, straight green trees, and surrounding flower beds and green grass terraces create a special scene for West Lake. 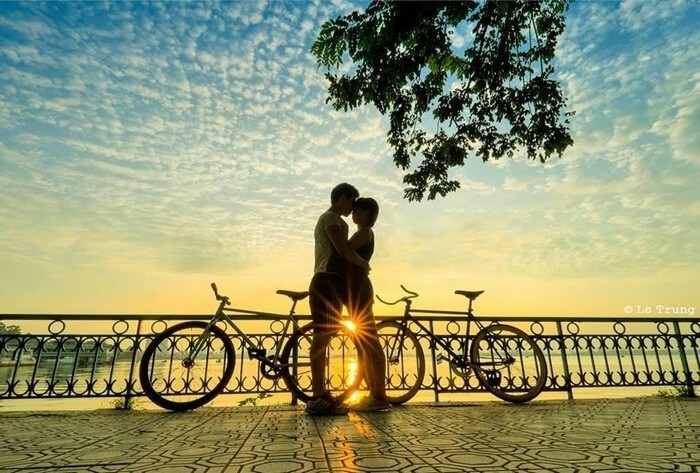 What makes West Lake special, distinguishing it from other lakes in Hanoi is not only the scenery but also the color of the water. The color of the water every season changes miraculously and dramatically according to weather, blue, gray, and morning when dark … And the scenery of West Lake becomes most sublimated, perhaps at the moment. at the end of the day – when the sunset falls over the landscape, with the blur of street lights falling on the water surface, creating an extremely magical and romantic scene.

Located at 1 Trang Tien, the Opera House is one of  the beautiful tourist destinations in Hanoi  with many historical marks. This is the venue for the great art shows of many leading singers and artists in Vietnam. Visitors can admire the wonderful architecture of the Opera House or buy tickets to one of the regular shows held so that you can see the magnificent interior of the theater. 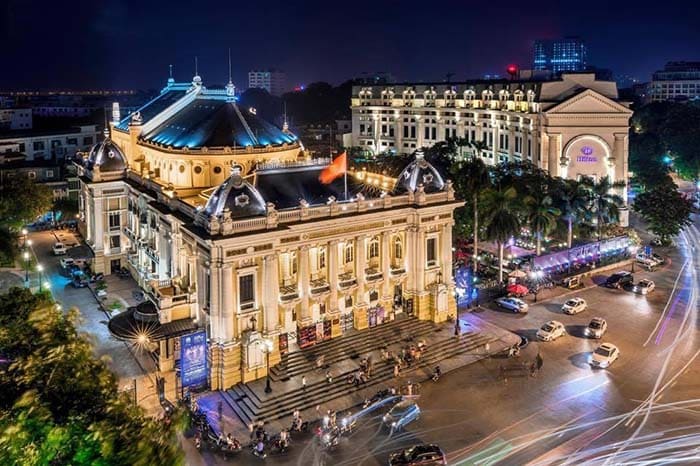 Hoa Lo prison was built in 1896 by the French colonialist with the name “Maison Central”, is a place to keep revolutionary soldiers against colonial rule. This is one of the most solid works in Indochina at that time. After the liberation of the capital, the prison was placed under the revolutionary government. From 1963 to 1975, this place was also used as a place to keep American pilots shot down by the Vietnamese army in the war destroying the North. 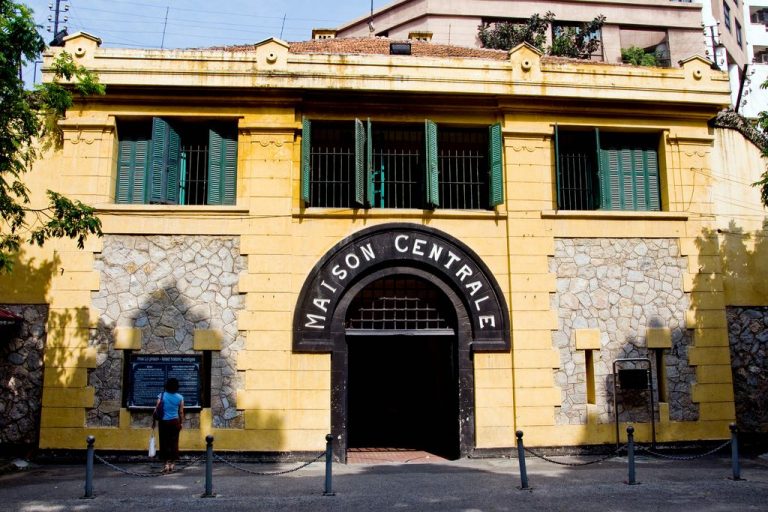 Imperial Citadel of Thang Long is a relic complex associated with the development of Thang Long – Hanoi, built by the dynasties in many historical periods. This is also the most important relic in the system of historical relics of Vietnam. Coming to Thang Long Imperial Citadel, visitors can visit prominent places such as archeology area 18 Hoang Dieu, Doan Mon, Kinh Thien Thien, Bac Mon (Cua Bac citadel) … 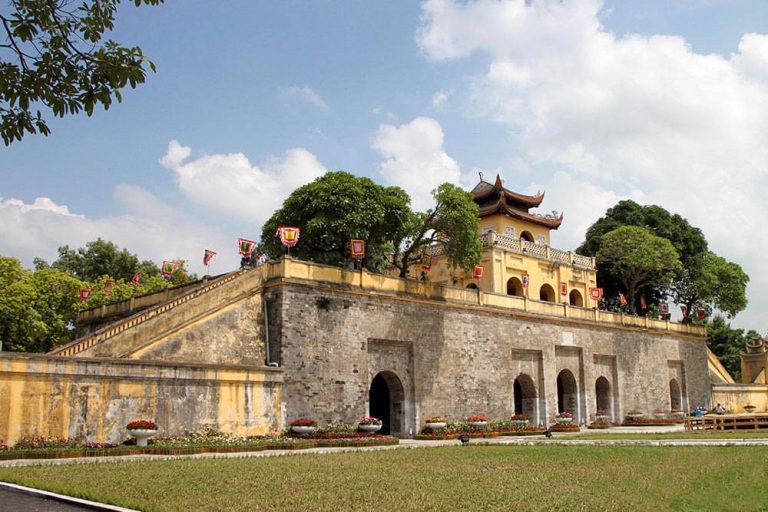 The Radio Hanoi, also more known as the Hanoi Flagpole, is located in the campus of the Vietnam Military History Museum. Rated as the most intact and monumental work in the complex of Imperial Citadel of Thang Long, Pillar Co is  a tourist attraction in Hanoi  that visitors cannot ignore in the journey to discover the history of the land. Ha Thanh. 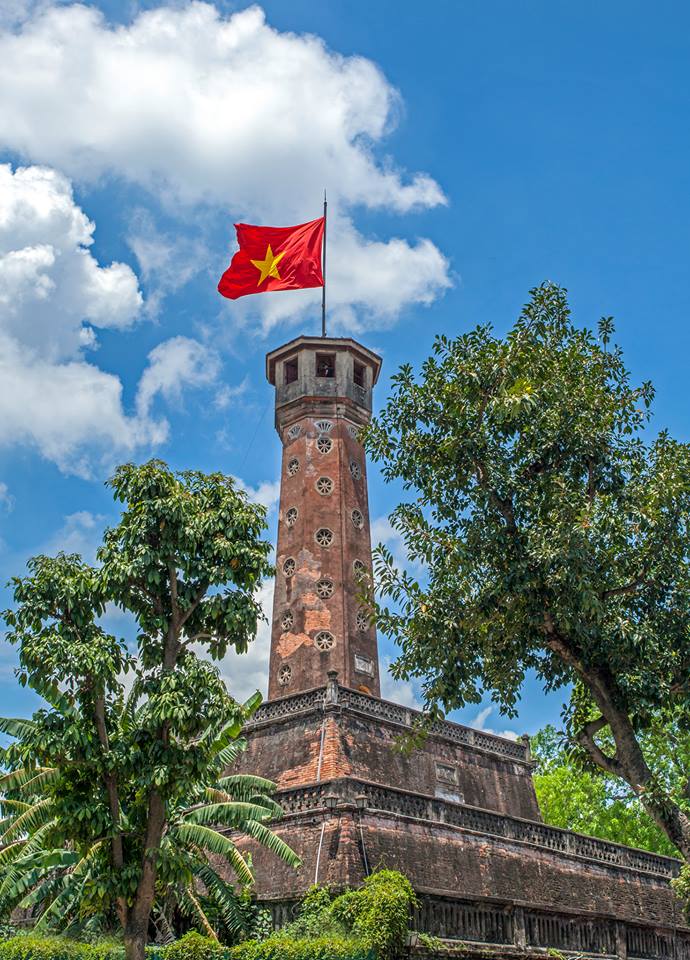 One Pillar Pagoda, built in 1049 during the Ly Dynasty, is one of the symbols of Hanoi capital next to the Turtle Tower and Khue Van Cac. Besides the spiritual meaning, One Pillar Pagoda is a unique architectural work with high aestheticism, expressed through the art of shaping the water, sculpture, painting … reflecting ancient cultural values. as well as a nationality. 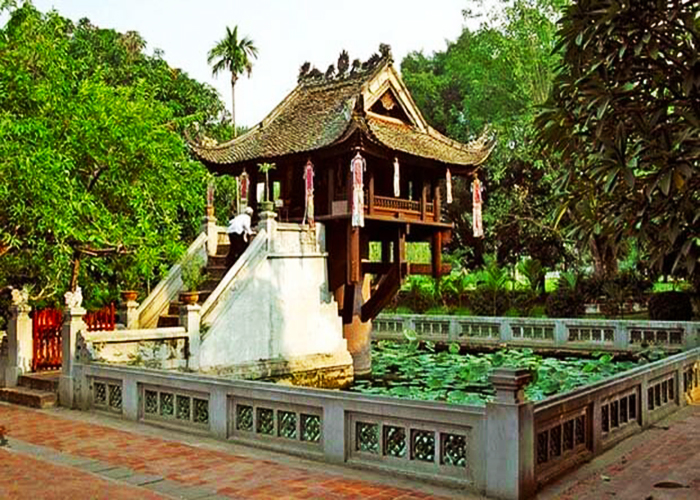 Referring to  tourist destinations  in Hanoi  , it is impossible not to mention Long Bien Bridge. The bridge was built by the French in 1898, is the first steel bridge to cross the Red River. Long Bien Bridge is associated with the two resistance wars against the French and the Americans, and is considered a symbol of Hanoi during the difficult years. 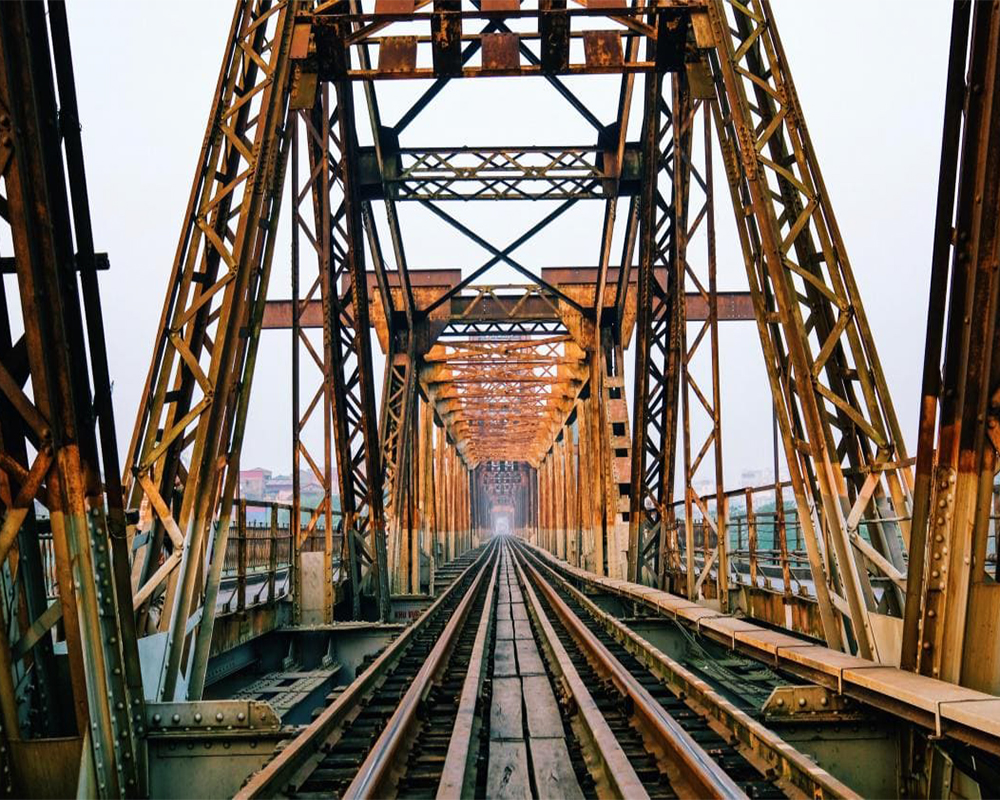 Past values ​​are still deposited in each bridge span, so in the hearts of many Hanoi Long Bien Bridge is an indelible memory.

Dong Xuan Market is one of the biggest markets in Hanoi. It sells a wide variety of items from food, apparel to consumables suitable for many different tastes and subjects. Because it is a wholesale market, so the items here are also cheaper than elsewhere. Do not forget to choose for yourself a few souvenirs when you come here to visit.

My Dinh National Stadium is the second largest stadium in Vietnam with a capacity of more than 40,000 seats. This is always a priority place to organize major events of national and international stature such as football tournaments, exciting music festivals … My Dinh Stadium is also the place where the fireworks show. brilliant every Tet holiday. Weekdays in the evening are also popular places for entertainment and entertainment. Select hotels near My Dinh for a complete fun session.

Palace of friendship culture between Vietnam and the Soviet Union

The Vietnam – Soviet Friendship Cultural Palace was a work that was started on the old DuXao house from the French era that was destroyed. The total area of ​​the cultural palace is 3.2 hectares, including 3 main houses: performer house, practitioner, technician. This is an architectural and cultural work for art performances, exhibitions, scientific conferences, meetings or major cultural events … Besides, this place is also an entertainment venue. , entertainment of many young people in the capital in the evenings of the week.

Government guesthouse No. 12 Ngo Quyen was formerly the Reunification Palace of North America, where the headquarters of the North American government was located. When the August Revolution broke out, Viet Minh forces and people of Hanoi attacked and occupied this building. The building was later renamed the Tonkin Government, which is also the workplace of President Ho Chi Minh and the provisional government of the Democratic Republic of Vietnam until the national resistance war. After the Indochina War ended, the North Government was remodeled to become a government guesthouse. In 2005, the city government attached a sea of ​​revolutionary historical relics. 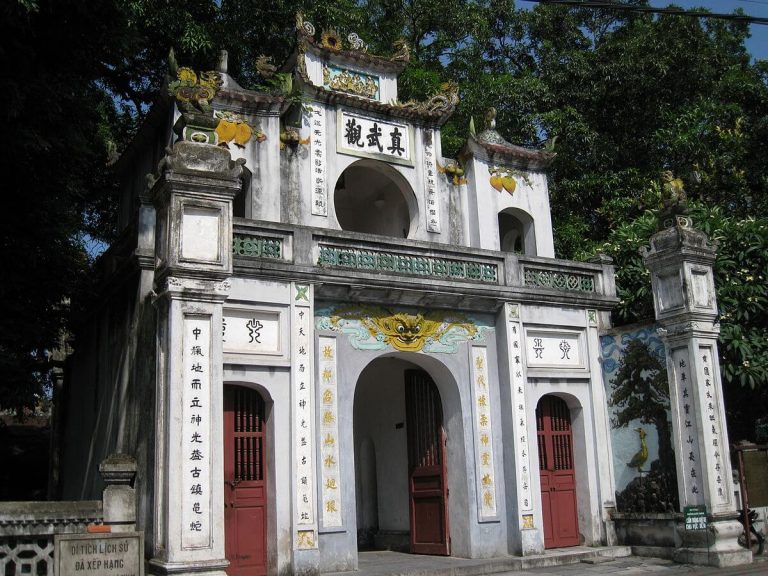 Located next to West Lake and the North Gate of Hanoi, this is the most impressive spiritual site in the capital. Quan Than Temple is one of the “four towns” of ancient Thang Long capital. In the temple of Huyen Thien Tran Vu, the god defends the North. Over the dynasties, Quan Thanh Temple was also restored many times, but basically remained without much change in architecture. Not only contributing to adorn the ancient and poetic beauty of West Lake tourist area, Quan Thanh Temple is also a valuable relic of culture, art, architecture and sculpture, an impressive tourist destination. when coming to Hanoi.

See also: 25 delicious dishes in Hanoi that you must try

Hang Dau water tower is a water supply works for the people of Hanoi dating back to the French colonial period. The work was built on the intersection of Hang Dau, Quan Thanh, Hang Than, Hang Luoc, Hang Giay, Phan Dinh Phung streets. Because the tower has a architecture like bunker, many people mistakenly call it, and the name “Hang Dau” has also become familiar ever since. 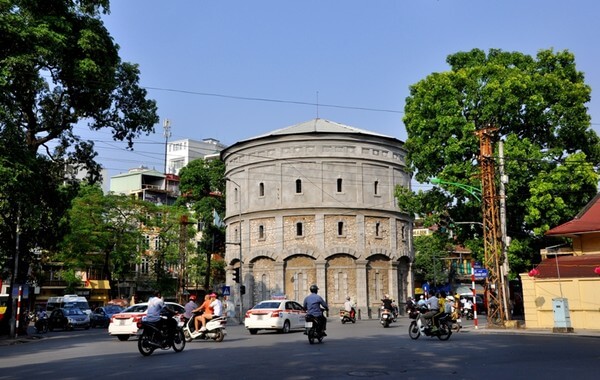 Ham Long Church is one of the largest and most beautiful churches in Hanoi. The church architecture is prominent by the bell tower located in the center of the simple and harmonious facade. Especially around the church is also decorated by many vividly sculptured holy statues.

Located in the middle of 4 big streets in Hanoi Tran Phu – Nguyen Tri Phuong – Hoang Dieu – Dien Bien Phu, Lenin Park is not only a solemn and beautiful highlight of the beloved capital but also attracts many people by its ethnic tragic sounds. Today, the park is an entertainment place for people and tourists to visit the capital. 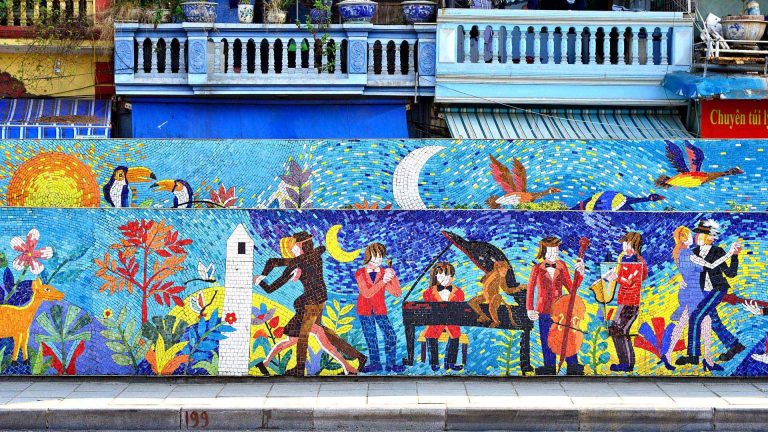 The ceramic road built in 2008 on the 1000th anniversary of Thang Long – Hanoi is one of the unique tourist destinations that cannot be ignored when coming to the capital. It has been recognized as the longest ceramic painting in the world by the Guinness World Records organization.

In addition to traveling to famous places in Hanoi, you can join Hanoi foodtour to understand the culinary culture of the old town as well as of Vietnam in general.