With the hustle and bustle of life today, Hanoi appears as a destination to preserve the old beauty and tranquility. Phung Hung mural street further accentuates the capital, bringing its brilliant beauty, a little nostalgia, but dearly attracts Hanoi tourist. 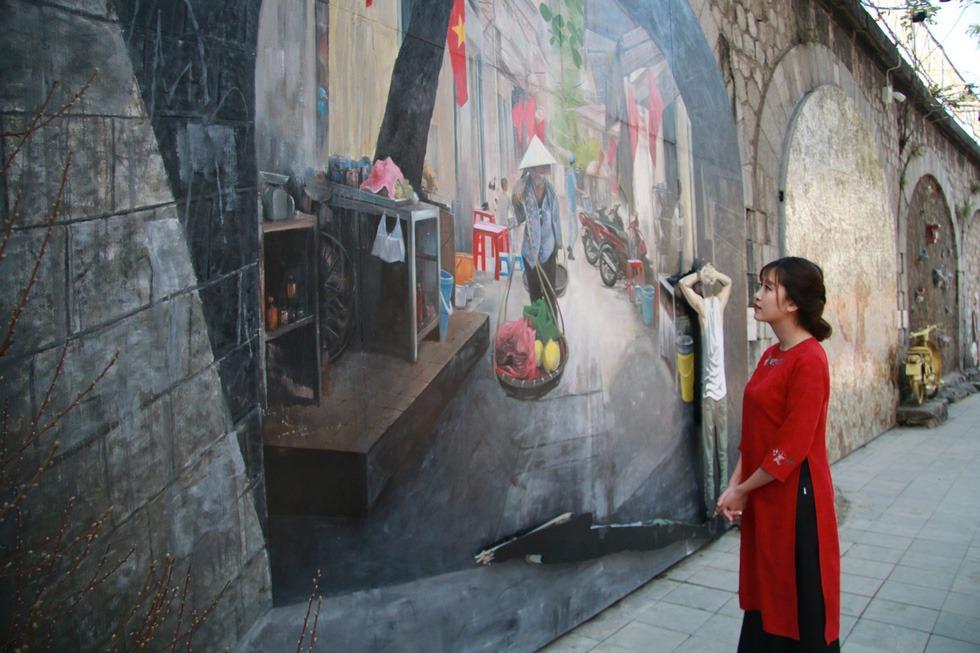 The project “fresco street” was officially opened in November 2018. After more than 3 months of construction, Phung Hung mural street has been completed, before the extremely positive reception of everyone. Pictures on nineteen arches of Phung Hung Street Railway Bridge are created from the drawings of artists from Vietnam and Korea.

Before that, the project was “covered” for a while. The reason is that some works of Vietnamese artists were not accepted by the Hanoi Department of Culture and Sports, and asked to correct the content or replace with other images. 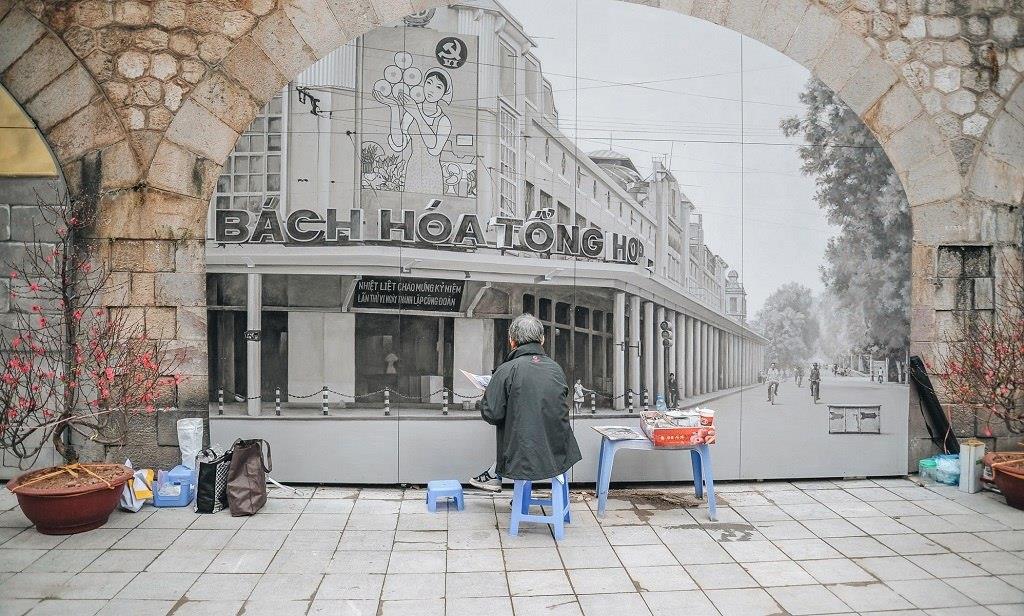 Picture of Department Store on murals

Pictures on the nineteen arches painted here recreated a part of the old life of an old Hanoi. Hanoi tourists visiting Phung Hung fresco street can see the image of General Department Store, the women carrying flowers, tinkling trams, Tet gifts … on the bridge arch. Those are the beauties of the capital that have receded into the past.

Featured Frescoes Painted On The Arch 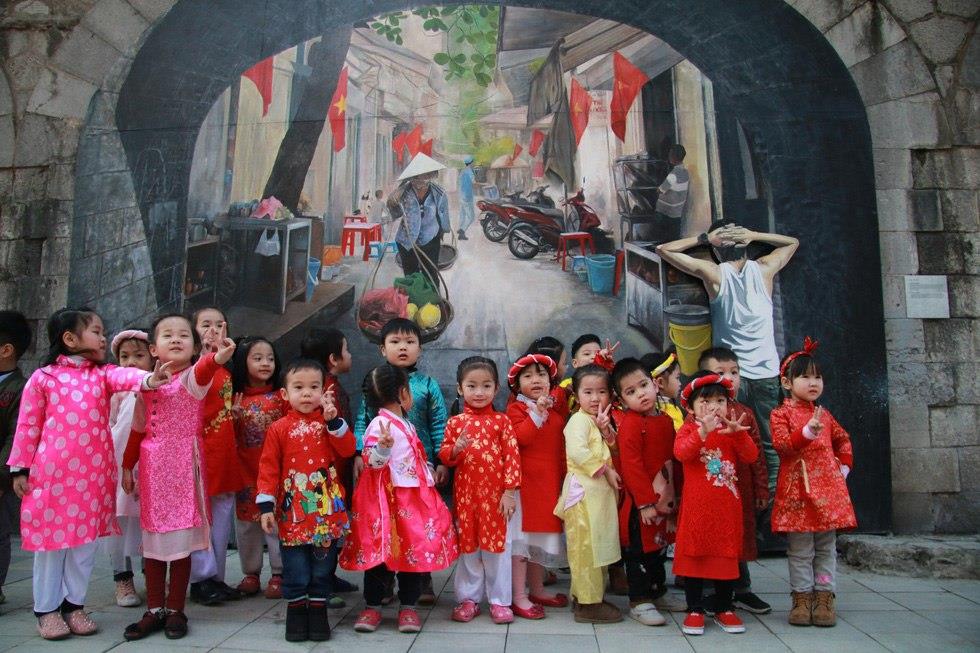 The frescoes are painted by the artists with PU and Golden acrylics, lasting from 5 to 10 years, then hard-clad in the arches without affecting the building structure. Before painting, the painting materials will be treated with a waterproof layer behind. Among the works here, there are a number of frescoes that have been drawn in 3-dimensional space to effectively interact with the viewer. All of them evoke nostalgia, help local people, or even Hanoi tourists, easily accept cultural and historical values ​​in a natural way.

When traveling to Hanoi, do not forget to stop by the murals here to enjoy the works that have successfully conveyed the message of Hanoi Capital. A thousand-year civilized Hanoi is facing great changes. However, this place still preserves the traditions and cultural quintessence, to make a mark on the hearts of Vietnamese people and international friends. 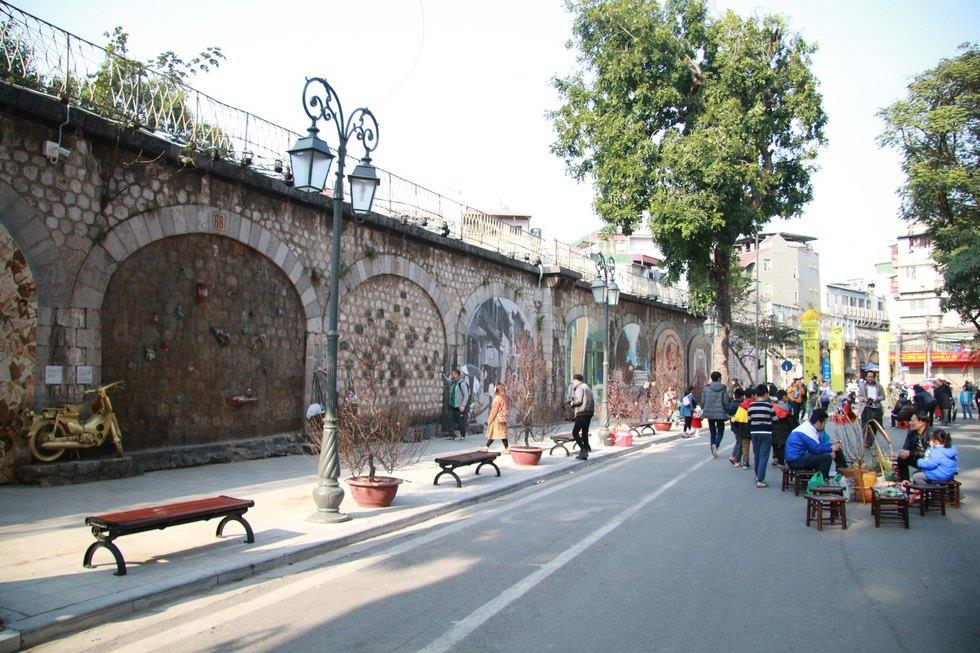 With a street length of just over 200m, Phung Hung mural street is said to be a cultural exchange, connecting with the space of Dong Xuan market, Hang Ma street, Hang Luoc. There are many entertainment activities, folk games, traditional arts held here. Phung Hung Fresco Street is also a place that connects Hanoi’s history and memories, with contemporary art in the community space.

On weekends, children can come with their families to play folk games. The old people come to see the paintings, and reminisce about those old days. Young people invite each other to take pictures and save beautiful moments of their youth. In addition, there are also tea tables and some traditional confectionery such as peanut cake, peanut candy … for Hanoi tourists to rest and take pictures.

Phung Hung Fresco Street has contributed to honoring, preserving and promoting the urban heritage value of the old quarter, at the same time creating a new public space for people and tourists in Hanoi. Visiting the fresco street is also an opportunity for public artworks to get closer to the public.