Dalat is a tiny settlement in Vietnam’s highlands that was initially constructed as a vacation retreat for French colonists. The milder temperature is a welcome relief from the sweltering heat that Vietnam is normally known for. We went to Dalat thrilled to participate in its numerous adventurous activities, and we were soon instructed to go canyoning because of its cool climate and very rich flora. Canyoning is the first thing that comes to mind when you ask someone what to do in Dalat.

We were sleeping at the Dalat Family Hostel. Although the rooms were subpar, the hostel made up for it with its atmosphere! Mama would prepare a huge supper every evening and spread it out on the floor. We’d all gather around, eat dinner as a family, and then play drinking games at night. Isn’t it amazing?

We put on our game faces and battled our pounding hangovers for approximately 30 minutes as we drove towards the woodland. We were prepared for a full day of rappelling, waterfall sliding, water abseiling, and cliff leaping. Soon after, the safety briefing began, and we were being fitted with harnesses and helmets. There were a lot of people from different tour companies when we visited, so we had to wait for a while before we could start walking down.

What to Bring for a day of Canyoning in Dalat?

We started our assault by abseiling down an 18-meter-high vertical cliff. Although it appeared to be a difficult task, it was actually a lot of fun! My heart was pounding as I leapt my way down this steep precipice. As most of you are aware, I am not very graceful, so on one of my last leaps, I ended up slamming my knee against one of the rocks. Despite the fact that it was only a scratch, this wound became infected a few weeks later! We arrived at the river, where there were two tiny waterfall slides, as soon as we got down. As we slid backwards, our heads first, we braced ourselves. We arrived at the bottom pools with a splash since the pebbles were so slippery.

We traveled down the river until we reached our next challenge: abseiling down this massive 25-meter waterfall. Because we visited soon after a heavy storm, the water was dark and filthy owing to soil erosion. Consider abseiling down a massive waterfall with water rushing at you. It was an EXTREMELY EXCITING EXPERIENCE. To add to the excitement, you don’t really abseil all the way down; instead, you let go of the rope and separate yourself for a 3m drop down the falls. 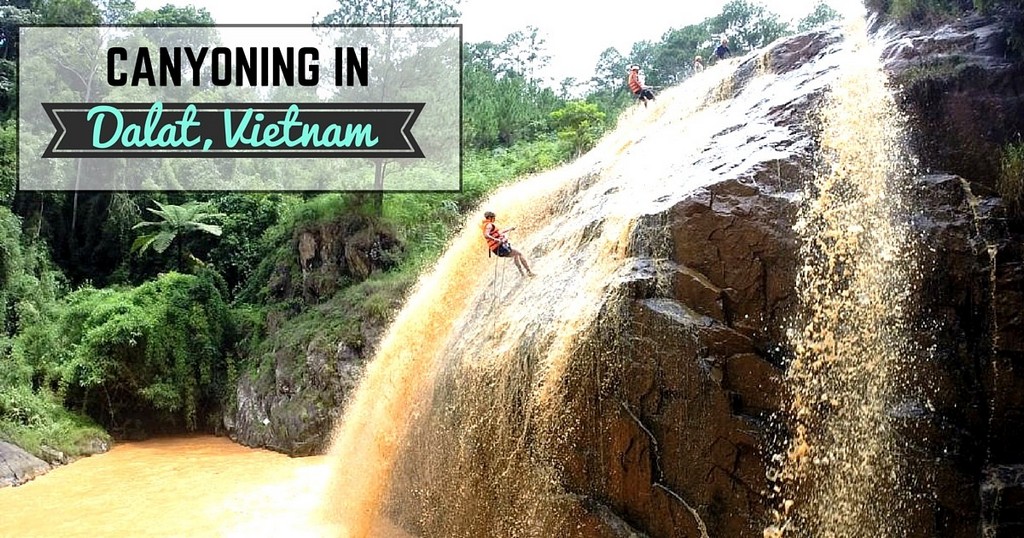 We stopped for a quick lunch of handmade Bahn Mi sandwiches, which we ate while seated atop yet another waterfall. We were all psyched up just being around nature and all of the exciting things. We were all suited up for the day’s cliff jumping trials, armed with Banh Mi in our tummies and a lot of adrenaline.

The first challenge is a whopping 11m free fall into a pool. There was a little rock ledge below it that you had to clear, which was why you had to sprint first to gain as much space away from the rock as possible. It sounded wonderful, but wow, was it terrifying! Now I’m one of those folks who will go to any length. I’ve done upside-down pendulum swings into canyons, skydived, and even swam with sharks, but one thing still bothers me: gazing down a precipice from which I’m meant to leap. I usually end up doing it, but it takes me a long time to muster the confidence to do so. With the rest of my company cheering me on, I took a few steps back and began racing towards the cliff. Then something occurred. My damp trainers slid as I took my final leap, forcing me to lose my equilibrium. As I plummeted into the sea, I barely cleared the ledge below me. As I lifted my head from the water, I heard a collective sigh of relief. As I fell down, I believe I saw leaves brush across my face. I was THAT CLOSE to the edge of the cliff. YIKES! The following leap was a 7m one, which was not as scary as the first.

The day’s last abseil test would be a 16m abseil. It sounded easy; after all, we’d been leaping from cliffs and abseiling down them all day. This one, on the other hand, was rather unique. The washing machine was similar to every other rock we abseiled down from, except that when you got to the bottom of the rope, you struck a large surge of water, forcing you to whirl, spin, and turn around—simulating a washing machine. When you hit the water, you lose your direction and must trust that when you let go, you will strike the ocean rather than the sharp rocks around you.

It was a huge sense of relief that I made it out of the whole canyoning in Dalat experience alive. It was definitely an amazing, adrenaline-filled experience which we highly recommend to people heading to Dalat.

How much you have to pay? The world’s 16 most stunning spring alleys